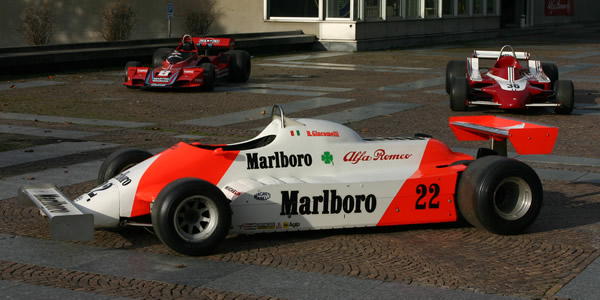 The unraced carbon-fibre Tipo 179F in the courtyard of the Arese museum, with the museum's Brabham BT45 and Alfa 177 behind it. Copyright Roberto Motta 2017. Used with permission.

Alfa Romeo built a version of the Tipo 179 that used a carbon fibre monocoque. It only appeared at a single GP, and even then it remained in the garage under its covers.

Autodelta announced several times during 1981 that a carbon-fibre car would be appearing soon. It did not appear at any stage during that season, as the team's focus had to remain on the 179's enduring ground-effect problems. By the time the car was complete, it had been overtaken by Gérard Ducarouge's new Tipo 182 project, so its only appearance was at the South African GP in January 1982, when the team appeared with old Tipo 179D cars for drivers Andrea De Cesaris and Bruno Giacomelli, which Motor Sport said "looked if they hadn't even been cleaned since last season". The spare car for that event was the carbon-fibre car, but this remained hidden at the back of the garage, and its covers were not even removed. The Tipo 182s were ready in time for the next Grand Prix, so the unused carbon-fibre car was retired to Alfa Romeo's museum at Arese, the Museo Storico Alfa Romeo. The museum refers to it as the 179F.