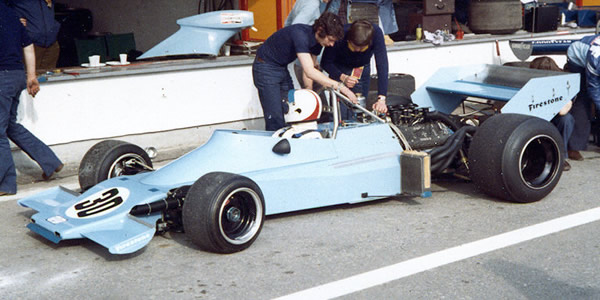 Chris Amon in the Amon AF1 at the 1974 Spanish GP, its sole F1 start. Copyright Paul Robinson 2017. Used with permission.

The one-off Amon AF1 was designed for Chris Amon by Gordon Fowell, with a chassis fabricated by John Thompson. It was an attempt to produce a relatively sophisticated F1 design but the small team had neither the experience nor funding needed to make it work.

Chris Amon had met Gordon Fowell during the Tecno project in 1973, when Fowell had designed a car for the struggling Italian team. After that project collapsed, Amon invited Fowell to design a car for him around the standard package of Cosworth DFV engine and Hewland gearbox. The monocoque was a standard low box-section affair, but had all the fuel held centrally between the driver and engine, an arrangement that would later become common. Fowell was influenced by the Lotus 72, and the Amon had torsion bar front suspension with inboard dampers, and inboard front brakes. The aerodynamics were said to be the work of Professor Tom Boyce, and the car had a different nose almost every time it appeared. The monocoque was constructed for the team by John Thompson's company TC Prototypes, and the car completed at the Amon team's base at Reading by former Rondel chief mechanic Richie Bray.

The Amon was ready for testing in March, but an accident in a private test session prevented it from being able to make its planned debut at the Race of Champions. It appeared for the International Trophy in April, Chris Amon managing 16 laps on the Friday, but wheel hub problems meant the team had to head home without attempting to qualify. The Spanish GP attracted 28 entries for 25 places on the grid, where the Amon had a new nose and the cowlings had been removed from the side radiators. The Amon started from 23rd position and then ran slowly at the back of the field for the opening laps. Apart from a few drivers emerging from pitstops, it remained at the back of the field until a front brake shaft sheared and Amon retired. The team then skipped the Belgian GP to convert the car to outboard front brakes and also fitted a full-width "Mk5 " nose housing the main radiator. The revised car was tested at Silverstone but crashed heavily at Maggotts, a rear hub failure being suspected. The car was going much better on Monaco's street circuit, qualifying 20th, but Amon decided not to start when another wheel hub problem was discovered. Rumours started to swirl of problems with Amon's wealthy backer John Dalton, and the team skipped the Dutch, French and British Grands Prix.

In late July, the car reappeared, having been further modified with another completely revised nose, and the radiators now back on the sides mounted almost flush with the bodywork. As Chris Amon was recovering from a back operation, Australian F3 driver Larry Perkins was drafted in for the test. Despite the claim that further tests had been successful, the car seriously overheated in first practice at the German GP so was fitted with larger radiators overnight. With Chris Amon now suffering from sinusitis, Perkins was given the chance to qualify the car on the Saturday. He only had four laps before rain started, and then crashed when he attempted a lap in the rain, wiping off a corner against the guard rail. Yet again, the Amon would not start. After the team was not even mentioned in connection with the Austrian GP, Pete Lyons’ report for Autosport on the Italian GP rather generously said that the Amon had “profited from five weeks work with a lot of detail refinement”, but this was really the final flicker of an ill-conceived and poorly executed project. Chris was 30th fastest of 35 cars on track in the Friday practice session, but could not even match that time in the two Saturday sessions, and finished second slowest on the time sheets, over 1½ seconds slower than the BRMs on the back of the grid and with only Leo Kinnunen's hopeless private Surtees behind him. A few days later, Amon was at Silverstone testing a BRM, and he would drive for that team in the North America GPs. The Amon marque ended after just 22 racing laps, every one of them at the back of the field.

After time in an Oxted nightclub, then in a garden, then in the Donington Museum cellars, the Amon was tracked down and acquired by dealer Roger Cowman in the mid-1980s. After another dealer took two years to sell it on, it was in a German collection for many years before being acquired by GP Masters owner Ron Maydon. He raced it from 2006 to 2014, after which it was acquired by Frenchman Frédéric Fatien, owner of GP Extreme. It has regularly appeared at the Monaco Historics, most recently in 2021.