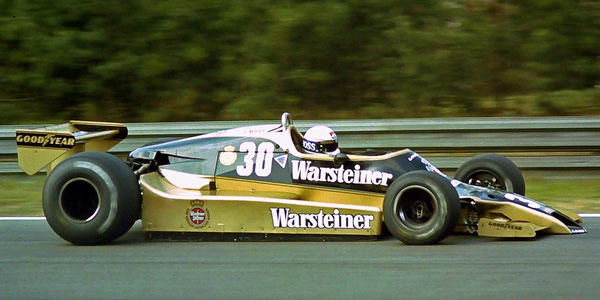 Designed and built in just 60 days after the FA1 was banned, the Arrows A1 kept Arrows going, but did not match the results of the earlier car. In 1979 and 1980, Rupert Keegan and Guy Edwards won rounds of the British F1 series in Charles Clowes' A1s.

After such a rush to ensure that Arrows could continue racing after the FA1 was banned, the team had no time to test the A1 before the Austrian GP, and results were disappointing. For 1979, a tidied and strengthened version of the A1 was produced to bide the team over until the A2 was introduced. Although the other teams had cars copying Lotus venturi ground effect, Riccardo Patrese was still able to qualify the "wing-car" A1 tenth at Long Beach, and new teammate Jochen Mass was eighth on the grid at Monaco. When the Arrows A2 was ready, three A1s were sold to Charles Clowes' team for the Aurora AFX British F1 Championship, where there were hardly any ground-effect cars available. Lead driver Rupert Keegan generally either won or crashed, and narrowly won the championship. Ricardo Zunino also won one race in Clowes' second car, and Guy Edwards won two British F1 races when he took over Keegan's car for 1980. Six car were built, all of which survive today.

The histories of the A1s are very confused, mainly because the team used three chassis plates, '78 1A', '78 2A' and '78 3A' which were swapped between the cars as required to match customs carnets.  This led to problems with identification after three cars were sold in 1979 to the Charles Clowes team for use in the Aurora AFX British F1 championship, as the plates observed on those cars bore no relation to the identities used during the cars' Grand Prix careers. The histories previously shown on OldRacingCars.com were based on attempts by the author in 1979 and 1980 to interpret those chassis plates rather than by examining physical differences and similarities, such as the rollhoops and the patterns of rivets on either side of the main fuel cell. The appearance of the sixth A1 chassis in early 2018 proved that these conclusions were incorrect, so an extensive project was conducted during 2018 to examine rivet patterns on all six cars and establish the exact racing record of each.

The first Clowes acquisition was A1/2 for Rupert Keegan to drive, and that car is clearly distinguishable through to the present car as it retained its 1978-style monocoque. The second acquisition was A1/4, raced by Ricardo Zunino, and that was clearly identifiable by stories in the press at the time about the spare car from the Monaco GP being taken straight to the workshops of BS Fabrications, who ran the Arrows for Clowes. The third car that the team acquired, loaned to Melchester Racing for Neil Bettridge to drive, was thought to be A1/6, but that identification was more tentative, and has been found to be incorrect. Comparison of rivet patterns demonstrate that the A1/6 chassis remained at the factory, and the third A1 sold to Clowes was the older A1/3, which had been updated from 1978 to 1979 specification.  The other key discovery was that the Clowes team swapped the usage of A1/3 and A1/4 for 1980, with Viv Candy taking over the ex-Bettridge A1/3, not the ex-Zunino A1/4 as had previously been believed.

The key changes as the result of the research are summarised below.

Changes to these histories made during 2018

It must be added that no analysis of this type can ever claim to have reached 100% confidence. However, the analysis has very clearly demonstrated that the conclusions previously reached were incorrect, and the author is very confident that the race results are now correct, and that the owners of each car in 2018 have been correctly identified. Please note that one of the owners does not yet agree with these conclusions.