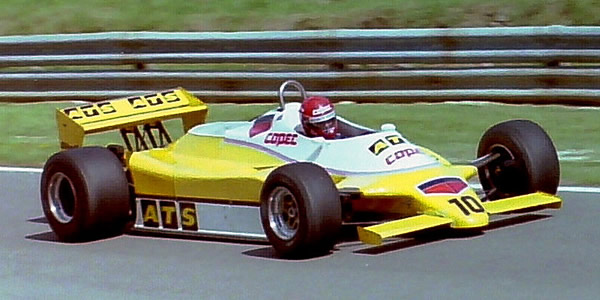 Although ATS had yet another new designer, Hervé Guilpin, the 1981 ATS D5 was recognisably a further development of the very conventional ground effect concept that went back to the 1979 D3.

Since the departure of designer Gustav Brunner during the 1980 season, the fortunes of the ATS team had gradually ebbed. ATS started 1981 still using Brunner's D4s, while new recruit Hervé Guilpin worked on a new design expected to be ready for the start of the European season. Jan Lammers started the year as lead driver, but would be replaced by Slim Borgudd for reasons of finance before the D5 appeared. Team manager Jo Ramirez, who had done so much to professionalise the team during 1980, left after team owner Günter Schmid threw a tantrum in the Argentine GP pitlane, so the preparation of the Guilpin's new ATS D5 (also called the HGS/1 by GPI and the D7 by a confused Autosport) was left to German mechanic Gunther Richter, previously in charge of the Maurer F2 team. Schmid was in overall charge, with the help of Roger Heavens, who had run both Lammers and Borgudd in F3.

The new car was described as looking much like the D4, but had a completely different monocoque and sidepods, and was also fitted with pneumatic suspension. The D5 made its first public appearance at the Belgian GP, where Borgudd used the old D4 on the Friday and the D5 on the Saturday, but failed to qualify. Borgudd failed to qualify again in Monaco, Spain - after being punted of the track by Siegfried Stohr's Arrows during practice - and in France. Then Schmid was able to recruit Alastair Caldwell to run the team, the ex-McLaren team manager having recently left Brabham after a falling out. His impact was immediate, Borgudd qualifying comfortably at the British GP and running all the way to the finish to collect a World Championship point for sixth place, only the second time the ATS team had scored points. He qualified for each of the next five races, each time around 21st on the grid, but on the one occasion he finished, he was last.

Peter Collins joined ATS for 1982, with Caldwell then able to concentrate on the technical side, and the team expanded to two cars. The 1982 D5s were only tidied up versions of the 1981 car, but new driver Eliseo Salazar qualified a highly encouraging 12th at Kyalami, and teammate Manfred Winkelhock scored two points for fifth place in Brazil after Nelson Piquet and Keke Rosberg were disqualified. Salazar also finished fifth place at San Marino, but he was the last classified finisher. Winkelhock put in some fabulous practice performances, notably fifth at Detroit where he attacked the bumpy track with gusto, and generally proved the quicker of the two. However, both cars slipped towards the back of the grid as the season continued.

ATS acquired BMW turbo engines for 1983, and Gustav Brunner returned to design a new ATS D6 with carbon fibre monocoque for Winkelhock to drive. The Cosworth-powered D5s were not seen again.