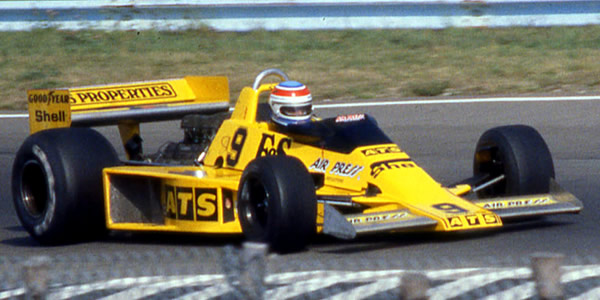 Michael Bleekemolen in the ATS HS1 at the 1978 US Grand Prix. Copyright Terry Capps 2017. Used with permission.

Robin Herd redesigned the Penske PC4s for the ATS team in 1978, and they were known as the ATS HS1. They were a complete disaster for the team.

ATS bought March's membership of FOCA, and Robin Herd was credited with the design of the new ATS HS1, an update to the aged Penskes which involved moving the oil radiator to the nose, new bodywork and allegedly new rollhoops, but the main result of which was to make the car significantly more angular and less attractive. Jochen Mass was hired as the new No 1 driver, and gave the car its first tests at Paul Ricard. The team's 1977 driver, Jean-Pierre Jarier, was expected to leave but was unable to find a better drive so signed on again to drive the second car. Not much sponsorship was in evidence, but Mass's car had Sony signwriting. Martin Walters was the team's development engineer at the start of the season, but the relationship with March quickly soured, and the last that was seen of Herd's contribution was a massive nose radiator briefly used and then abandoned at the South African GP tests. The link was severed by Long Beach, and by the time of the Monaco GP, the HS1s had been returned to an appearance much closer to the original Penske. Jarier outqualified Mass in the early races but the best he did was 11th place on the grid at the opening race, and the cars then slipped down towards the back. Reliability was good, but the best finish all season was Jarier's eighth place in South Africa.

Jarier was soon distracted by more promising drives in Formula 2 and in Can-Am, and his place was taken by Albert Colombo, who failed to qualify at both his races, then by Theodore refugee Keke Rosberg, who outqualified Mass at the British GP. Jarier inexplicably returned for the British GP but wrecked one of the HS1s in practice, failing to qualify. Mass then extensively damaged the other in the race. John Gentry, who had been designing the team's new D1, left the team after that race following an argument with volatile team boss Gunter Schmid, and he was followed out of the door by the chief mechanic. At the Austrian GP, the cars were said to be undriveable, and neither qualified for that race or the next two. Michael Bleekemolen, whose sponsor F&S Properties had paid for a meteoric rise from Formula Vee in 1977, to a F3 drive in a works Chevron for 1978, then F2 drives with Fred Opert's team, was (over)promoted into the second ATS F1 seat, and he stayed with the team after Mass was injured testing the D1. Harald Ertl made up the numbers at Monza, but was slowest of all. The season ended with Bleekemolen driving one of the old HS1s in North America while Rosberg drove a new D1. Only Art Merzario's home-built creation and Beppe Gabbiani in the second Surtees TS20 were slower than Bleekemolen at Watkins Glen, where at least the Dutchman made the grid, but in Montreal, he brought the HS1's career to an end by being at least two seconds a lap slower than anyone else in all three qualifying sessions.

All three HS1s, the two original converted Penske PC4s and the third car that was built from spares acquired from Penske, remained with the team for many years. Chassis HS1/2 was kept in the most complete condition and was seen by the author at the ATS factory in 1987. This car was finally sold as part of a package of cars in about 2013, and was rebuilt for historic racing. About five years earlier, HS1/1 had been sold to an American who had it rebuilt to its original Penske PC4 configuration for US historic events. The third car, the little-used HS1/3, has been on display in a number of museums in Germany.