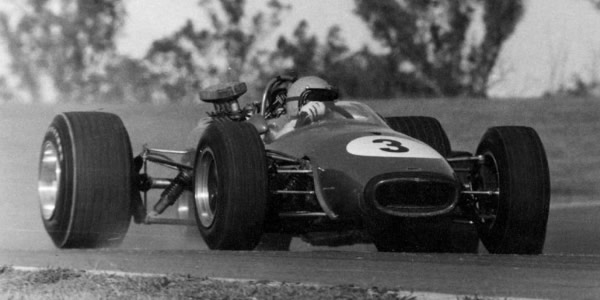 The first of the new BT23 series of cars to appear, the Brabham BT23A was built with a 2.5-litre Repco V8 engine for Jack Brabham to race in the 1967 Tasman series.

The BT23A was not ready in time for the New Zealand GP in January 1967, but made its first appearance at Wigram, where Jack Brabham set fastest lap of the race after a long pit stop to remedy overheating problems. He skipped the Teretonga race and returned to Australia to try to get the BT23A sorted out, but it was still overheating at Lakeside. After enlarging the nose area on the car, Brabham had a good run to finish second. The overheating issue was replaced by a fuel injection problem in the Australian GP, and Brabham finished off the pace in fourth place. The car finally ran properly at Sandown and Brabham took pole position, finally getting the better of Jim Clark’s Lotus 33 and Jackie Stewart’s BRM P261. The Australian was able to hold off Stewart for the lead until the Repco’s ignition broke and put him out of the running. With the BT23A now fully sorted, Brabham took pole position at Longford and dominated the race: leading every lap, setting the fastest lap of the race, and winning by nearly a minute from Clark. As the BT23A was acting as the prototype for Brabham’s BT24 F1 design, the team’s chances of retaining the World Championship looked strong.

After the Tasman series, the BT23A was sold to Scuderia Veloce for the 1967 Australian Gold Star series.

Built for Jack Brabham to use in the 1967 Tasman series and fitted with a 2.5-litre Repco 640 V8. Brabham won the last race of the series at Longford in March. The car was then sold to David McKay's Scuderia Veloce and entered for driver Greg Cusack in the 1967 Australian Gold Star. Cusack finished second in the series having won the Gold Star round at Symmons Plains in November, and two weeks later also took the Australian Hill Climb Championship in the car. Cusack then raced the BT23A in the Australian rounds of the 1968 Tasman series but was injured when he crashed at Longford in March, and decided to retire. Although extensively damaged, the car was repaired and Phil West took over the drive for the 1968 Gold Star, starting with victory at Bathurst on Easter Monday. The Brabham was then sold to Brian Page, who used it in Gold Star and regional events during 1969. After being missig for a couple of seasons, the Brabham was mentioned again in 1972 when Monarch-Ford racer Alan Stewart was said to have it for ANF2. At some point the car was crashed, and the rear of the chassis was replaced. Acquired by Peter Simms (Kurrajong, NSW Australia) in January 1980, restored and raced for the first time at Amaroo in August 1984. Raced in Australian historics by Simms for many years. In December 2017, the car was acquired from Simms by The National Museum of Australia (Canberra), and placed on display in the museum.