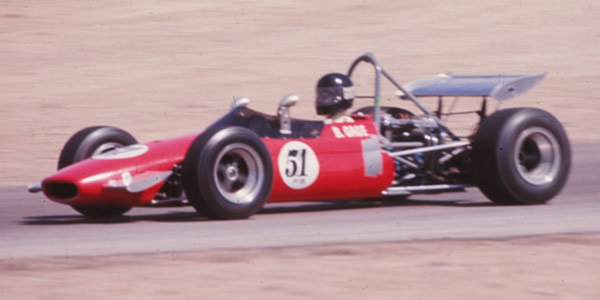 Bob Gage in his Brabham BT23G at Willow Springs in 1971 or 1972. Copyright Allen Brown (copyright purchased) 2014. Used with permission.

Two Brabham BT23Gs were built for Formula B in 1968 with a specification differing slightly from the BT23F in that they had Hewland Mk 5 gearboxes instead of a FT200. Little is known of their exploits.

Without any certain knowledge of who bought the BT23Gs, all that can be said is that any Brabhams that appeared in FB that were called BT23s - apart from Bill Gubelmann's BT23F - were likely to be those two BT23Gs. In 1968, the only such car is that of David Webster (Newport Beach, CA) then in 1969 the rarely seen car of Lee Midgley and Bob Griffith (Riverside, CA) and from 1970 to 1972, the car of Bob Gage. A second car overlaps with Gage's in 1971, that of Randy Hancock (Campbell, CA). Gage's car then almost certainly went to Ron Lampley (Rialto, CA) for 1973. In 2010, both cars were reported to be owned by Bob Swanson in Washington state but no further information is yet forthcoming. 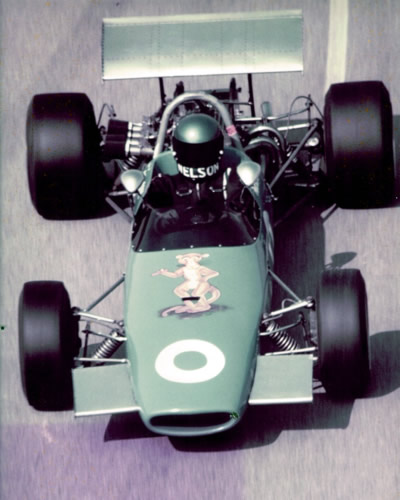 The history of this car is presently unknown before 1970 but probably the southern California car of Dave Webster, Lee Midgley and Bob Griffith. Then the #51 Brabham BT23G-Ford entered by B & D Racing Enterprises for Bob Gage (Fullerton, CA) at the April 1970 Riverside Pro race. He retired after just a lap with engine failure. Entered for Gage in the next two races, at the Riverside National in Feb 1971 and in a Regional at Riverside in April 1972 where he finished third and won the FB class. In 1973, Ron Lampley (Rialto, CA) had a red #51 Brabham, identified by Formula magazine at the end of the year as a BT23. Sold to Roy Nelson (Huntingdon Beach, CA) in 1975 or 1976 in exchange for Nelson's Titan Formula Ford and fitted with a Ford BDA and raced in FB until 1978. Returned to racing in 1980 (now classed as Formula A) and Roy recalls that he sold it at the end of that year to 'a young guy in San Diego'. Then unknown until 2010, when it was reported to be owned by Bob Swanson in Washington State, US.

Unknown until this chassis number given in an advert by George W. Davis of Racesales (Berkeley, CA) in July 1970 and may therefore be the "BT23" advertised nearby by Bob Christensen (San Mateo, CA) two weeks later. That in turn suggest it was 'the Randy Hancock car' just 35 miles away in Campbell, CA in 1971 and implies that BT23G-2 was racing in northern California at the same time that BT23G-1 was racing around Los Angeles in southern California with Dave Webster, Lee Midgley and Bob Griffith, Bob Gage and Ron Lampley. Tommy Gouldstone (Santa Rosa, CA/Napa, CA, again in the San Francisco area) then ran BT23G-2 as a Formula C car in 1976, using a Cosworth SCA engine. Then unknown until 1988 when it was hanging on the wall of Tom Rust's workshops at Sears Point, still in the San Francisco Bay area. Bought from Rust by Giles Greenfield (Seattle, WA) and restored for racing with the local SOVREN vintage racing group in 1998. Sold by Greenfield to Brad Adams (Seattle, WA) in 1999 but then unknown until reported to be owned by Bob Swanson in Washington State in 2010.

Dave Webster (Newport Beach, CA) raced a Brabham BT23 in Southern Pacific SCCA Formula B 1968. As the BT23F was with Gubelmann, this was presumably a BT23G. Webster had started the season in a LeGrand Mk 6 but swapped it for the "state of the art" Brabham BT23 and finished second in the category, winning the SCCA's "Rookie of the Year Award" for his performance. His last recorded appearance in the car was at the 1968 Run-Offs, where he retired. Subsequent history unknown.

Lee Midgley and Bob Griffith owned an Alfa Romeo dealership in Riverside, CA and are best remembered for their exploits racing production-based Alfas in SCCA racing. In 1969, they ventured into Formula B with a Brabham BT23 of some type. It was described as a BT23B when it appeared at Sears Point in June 1969 but as this is a 2.5-litre Climax specification, that seems unlikely. In the entry list for the Sep 1969 Thompson race, it was just described as a BT23. As no ex-F2 BT23s are likely to have reached the US by June 1969, It is more likely to have been a BT23G. 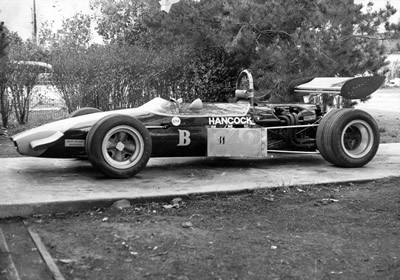