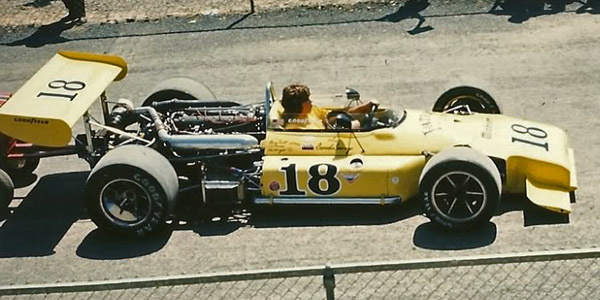 The Brabham BT32 is taken out for practice at Pocono in July 1972. Copyright Jim Stephens 2014. Used with permission.

Brabham's 1970 Indycar design, the Brabham BT32, was raced by Jack Brabham just once, at the 1970 Indy 500. Lee Roy Yarbrough drove it at the California 500, leading in the final stages before the engine blew up, and it then went to the Patrick Petroleum team. It was Brabham's last Indy car.

As Repco's quad-cam V8 engine could no longer compete with the power of the turbocharged Offenhauser engine, the new BT32 was built around the venerable American powerplant. However, in other regards, Jack Brabham described the car as only being slightly different to the Repco-powered BT25 that he drove in 1969. Both cars were of monocoque construction, the BT25 having been Motor Racing Development's first such design. The new car was completely conventional, albeit lower, wider and heavier than many of its rivals. Due to a trucking strike in New York, the BT32 only arrived at the Speedway on 18 May instead of the intended 11 May, so the team was too late for the first weekend's qualifying. After 48 hours frantic work to get the car ready to run, it was first tested on Wednesday 20 May, and Jack Brabham was delighted with it. He quickly adapted to the lag of the turbocharger, and after three days of testing qualified easily on the second weekend, an ignition timing issue which was only solved just before the race being the car's only problem. Jim Gilmore then added his Gilmore Broadcasting sponsorship to the car, casting it as part of a two-car team with Gordy Johncock. With the turbo Offy now dominant, overseas interest in the race was reduced, and Brabham was the only non-American in the field. Although never right up with the leaders, the Australian went well in the race, even leading one lap during a flurry of pitstops early in the race. He later felt his engine starting to seize, and retired with 25 laps still to run.

Brabham was due to race the car again at the California 500 in September, but the race clashed with the Italian Grand Prix, so successful stock car driver Lee Roy Yarbrough was brought in to drive the BT32. After only 23 laps of practice, he qualified it ninth with an impressive qualifying speed of over 174 mph. He also went very well in the race, and when Al Unser retired with 13 laps to go, Yarbrough put the Brabham into the lead. Unfortunately, just four laps later, the Offenhauser engine blew itself apart. The car was returned to England for modifications, and in August 1971 was acquired by Patrick Petroleum, who had mechanic Mike Devin prepare it for Johnny Rutherford to race at Ontario in 1971. His qualifying speed of 179.89 mph placed him fifth on the grid, the car's setup being aided by ex-Chaparral development engineer Don Gates' onboard telemetry system. Rutherford was put out of the race when the Brabham caught fire in the pits, slightly injuring Devin.

For 1972, the Patrick Petroleum team built new Antares cars for Rutherford and new signing Swede Savage, but the cars flopped and Rutherford continued to drive the Brabham. After the Indy 500, Rutherford left for the Gerhardt team, and Savage took over the Brabham with veteran Jack Beckley coming in as chief mechanic to replace Devin, who left to work for Lloyd Ruby. Gates and Mike Pocobello abandoned their Antares design to develop the Brabham, and Savage qualified the two-year-old car fourth at Michigan in July, then challenged Bobby Unser's new 1972 Eagle for the lead of the race. Savage continued with the BT32 to the end of the year, but it retired from most of its races with engine problems.

Over the next year, Walt Michner, a major shareholder in Patrick Petroleum, moved to become a "silent partner" in the Patrick Racing team, which was funded by Michner, Ueal 'Pat' Patrick, Dick Emmons and Leroy Scott. Pat Patrick then became the team's spokesman. Gordy Johncock replaced Rutherford, George Bignotti was recruited from the Vel's Parnelli team as crew chief, two new Eagles were acquired, and STP sponsorship was negotiated. Johncock won the 1973 Indy 500 for the transformed team, and the Brabham was never mentioned again.

If you have any further information on this car, please email Allen at allen@oldracingcars.com. 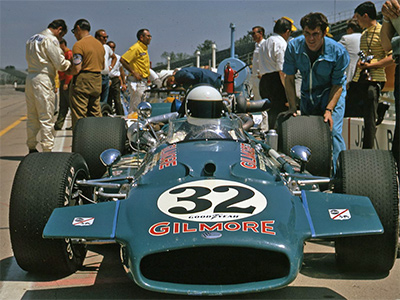 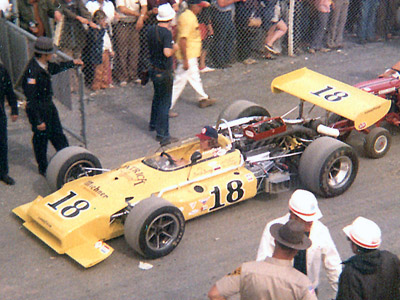 New for Jack Brabham at the 1970 Indy 500 as Motor Racing Developments's #32 Gilmore Brabham entry. Brabham qualified 26th and finished 13th. Driven by Lee Roy Yarbrough at the California 500 in September, where it was sponsored by Norris Industries and tended by mechanic Roy Billington. It was sold to the Michner Industries/Patrick Petroleum team part way through 1971, replacing the 1966 Eagle that driver Johnny Rutherford had used earlier in the season. Driven again by Rutherford in early 1972, and then by Swede Savage later in 1972 after Rutherford moved to the Gerhardt team. It was not seen again after the end of 1972. At some point it was acquired by the Indianapolis Motor Speedway Museum, and according to Aaron Lewis, it was in the basement for many years awaiting its turn to be restored. In early 2020, following the Penske takeover of the Speedway, the BT32 was said to be next in line for restoration.

If you have any further information on this car, please email Allen at allen@oldracingcars.com.