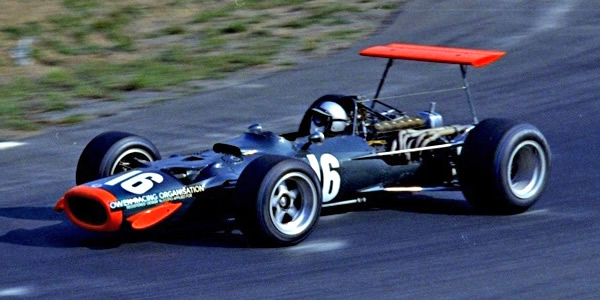 Pedro Rodriguez on his way to third place at the 1968 Canadian Grand Prix in his BRM P133. Copyright Norm MacLeod 2017. Used with permission.

After Len Terry's TAC built the three BRM P126s at its own workshops in Hastings, BRM built two more cars to the same design at Bourne. These BRM P133s were raced by Pedro Rodriguez in 1968, and by Jackie Oliver in 1969.

The first P133 was produced for the 1968 Race of Champions, where Pedro Rodriguez finished second, after team leader Mike Spence had qualified one of the P126s on the front row but retired. Rodriguez then qualified 133-01 on the front row for its first GP, the Spanish, and sped into an early lead. He was dueling with Chris Amon's Ferrari for the lead when he went off on lap 28 on oil, and the P133 ploughed into the barriers. While 133-01 was being repaired, Rodriguez used 133-02 at the Monaco GP, but hit the barrier at Mirabeau on lap 17 and wrote it off. He had 133-01 back in time for the Belgian GP, where Rodriguez finished second, and he might have challenged Bruce McLaren for the win had the BRM not been running low on fuel. He was off the pace in practice for the Dutch GP, but went very well in the race to finished third. Another fine race followed at the French GP, where Rodriguez excelled in the rain and forced the BRM into the lead on lap 19. Jackie Ickx retook the lead, but Rodriguez seemed secure in second place until the car became stuck in third gear, and the Mexican lost three laps. The P133 was at a significant disadvantage at the next two GPs, as BRM were late to adopt wings, but the team worked with aerodynamicists at Imperial College to have something ready for the Gold Cup, where Rodriguez used Dickie Attwood's P126. Rodriguez then had the new P138 for the Italian GP, but returned to the P133 for the Canadian GP where he again had a good run from a midfield grid position to finish third. He preferred the P133 again at Watkins Glen, where he retired, and in Mexico where the home crowd lifted him to a fourth placed finish, and sixth in the final World Championship standings.

New recruit Jackie Oliver was allocated the sole remaining P133 in 1969, and used it until his new P139 was ready. The P133 was then redundant, but would stay at Bourne for another two years until it was bought by Robs Lamplough. He raced it at the Jochen Rindt Trophy in June 1971, and at the Rothmans 50,000 in 1972, after which it was rarely seen in public: for example at the West Wittering Motor Museum in the early 1980s, and at Motorworld '91 at Epping in 1991. Lamplough used it at the Monaco Historics in 2006 and 2008. In early 2017, it was in storage, still in remarkably original condition.