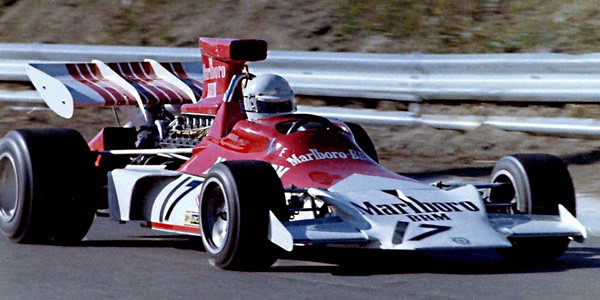 Bill Brack was given a chance in the fourth Marlboro BRM at the 1972 Canadian GP. Copyright Norm MacLeod 2017. Used with permission.

It can prove very difficult to replace a good car, and the BRM P180 was unable to replace the very successful P160. Tony Southgate's 'dragster' suffered unresolvable handling problems and was dropped at the end of 1972.

After the success of the 1970 BRM P153 and the 1971 P160, Tony Southgate produced a further development of this theme for 1972, the BRM P180. The principal change was that the radiators had all moved to the tail of the car, below the rear wing, giving a quite extreme 70:30 weight distribution but allowing the nose of the car to be very wide and flat. The cockpit was more all-enveloping than normal, and the car had a dragster-like look. It first tested in mid-February but BRM did not like the presence of the press, and its testing disappeared under a veil of secrecy for two and a half months. Clearly something was not right. The two P180s first appeared at the Spanish GP, the prototype as a race car for Peter Gethin, and a new second car as a T-car for Jean-Pierre Beltoise. Gethin could not get the car working properly, and qualified on the penultimate row of the grid. Howden Ganley was the next person to try it, and handling difficulties and brake problems were reported at Monaco, where Beltoise won in a P160B. Finally, after the Oulton Park Gold Cup, where Reine Wisell found the front was so light that the front brakes locked up, the project was put aside.

Relationships with main sponsor Marlboro were also worsening, and BRM reduced the size of their team from a ludicrous five cars, to an almost manageable three. The Rothmans 50,000 libre race at Brands Hatch in August gave the team a chance to put some miles on a modified P180, now with slightly repositioned radiators, but there was no intention to race it. Beltoise raced a P180 at the Italian GP, qualifying 16th and finishing eighth, and then both cars were taken to the North America GPs, ironically just as Southgate announced he was leaving BRM to join Shadow. Beltoise still found the handling to be a problem, and both P180s were well down the grid. Beltoise's perseverance with the P180 paid off in a poorly-supported non-championship race at Brands Hatch just after the North American tour, where an astute choice of tyres allowed him a surprise victory. It would be the last appearance of a P180 in Formula 1.

One of the P180s was kept in BRM's collection of cars, and the other was sold to hillclimber John McCartney. This latter car passed through a number of hands and was raced in the HSCC Historic F1 series in the early 1990s. It has since appeared in historic racing all over the world, and was recently sold to a German owner. The BRM Collection car was sold to the late Tom Wheatcroft in 1981 and was still in his Donington Museum very recently.