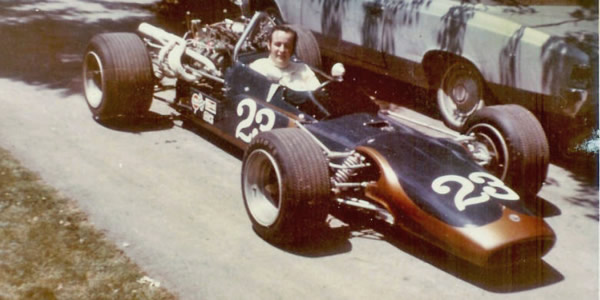 Chinook built four Formula A cars in 1969 and 1970, using an unfathomable range of model numbers from Mk 5 to Mk 9. None appeared very often, and they achieved minimal success.

Toronto-based Chinook, run by Canadian-Hungarian brothers Rudy and George Fejer, had built four Group 7 cars for use in Can-Am and in the Canadian Drivers Championship between 1966 and 1968 but for 1969 CASC moved the Canadian Championship to Formula A, for single-seater cars with 5-litre stock block engines. The Fejers laid down a run of four cars for this series and immediately attracted customers, including Brian Weightman who had the first car equipped with a Ford engine for a low-budget project, and Nat Adams, who had bought the Chinook Mk 5 Can-Am car in 1968.

George Fejer had built and raced a car in USAC road racing events in 1968 but this had not been a huge success and the new Formula A cars were more closely related to the Group 7 cars. According to former team member Ed Butt, the frames of the four cars were all built at the same time and had the same suspension but the Fejers chose to give a different model number to Weightman's Ford-powered car which was named in the press at the time and in later adverts as the Chinook Mk 6. Nat Adams' car, which had slightly squarer bodywork, was called the Mk 8. The model names applied to the final two cars, sold to Harvey Craig and Don Mason, are not known.

Please note that these histories are still in a state of flux. Since they were originally written, with the help of former Chinook team member Ed Butt, further information has been supplied by Steve Morici of Morici Motorsports West and by Richard Taylor of Autotune. The difficulty is that the information does not all agree and in some places directly conflicts. The biggest problem is the model numbers. The Can-Am cars were the MK 1, Mk 2 and Mk 5 but the 1968 USAC car is called the Mk 6 in some places and Mk 7 in others. Brian Weightman's car is then either a Mk 6 or a Mk 7; Nat Adams' car anything from a Mk 6 to a Mk 9; and the other two FA cars either Mk 7s or Mk 8s. Steve and Richard have done a great job preserving the history of Chinook and understanding the cars, so these histories will evolve as more is decyphered.

If you have anything to add, even if it is contradictory to what is written here, please email Allen. 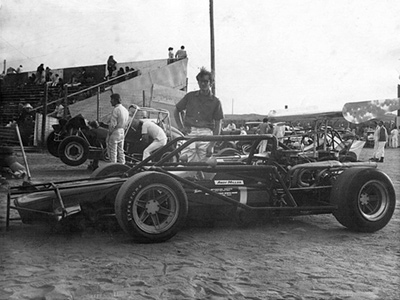 Andy Miller with his ex-Formula A Chinook at Cheyenne Speedway. Copyright Andy Miller 2021. Used with permission.

Built with Ford engine for Brian Weightman (Toronto, Ontario): Canadian Championship 1969 (2 starts) and Canadian rounds of the SCCA Continental Championship 1969 (1 start). Advertised in November 1969 when it was said to have raced only six times since it was delivered in July 1969.

Then unknown until January 1973, when it was acquired by Andy Miller (Fort Collins, CO) from Ron Hunter, owner of Rocky Mountain Winkelmann in Lakewood, CO. Collins was then racing "modifieds" at Intermountain Speedway in Cheyenne, Wyoming. At that point the car was fitted with a rather special 302 ci small block Ford V8 and had a ZF 5-speed transaxle. Hunter had fitted a full roll cage with the intention of running it at the Century 21 Raceway, a very short-lived new track at Aurora, CO, but could not get rear-engined cars accepted. Miller raced the car on the ⅕-mile oval at Cheyenne for three seasons, and also once each at Englewood Speedway, in Denver, Oregon Trails Raceway in Scottsbluff, Nebraska, and at Binkelman, Nebraska. He sold it as a rolling chassis to a man in Pennsylvania around May 1977.

History then unknown until bought from Chuck Haines by Steve Morici (Wrightwood, CA) in May 2008. Still with Steve in April 2021.

Adams started to convert the car for oval track racing with a roll cage but never finished it and instead sold it to Ed Butt in 1971. Butt planned fit it with a twin turbocharged DOHC 255 ci Indy engine and run it as a supermodified at Oswego NY but before he got the engine installation completed, Oswego banned aluminum blocks. He then started work on a twin turbocharged 5.7-litre Chevrolet engine but the driver was killed in a road accident before this was ready to race and Butt lost interest in the project. Later in the 1970s, Butt decided to close down his workshop and having nowhere to keep the car and not much market for it, he sold the engine and 2 speed Halibrand transmission, stripped off all the suspension and running gear and scrapped the chassis, a decision he regrets to this day.

Craig sold the car less engine in 1973 to a garage owner in Toronto but does not recall his name. Subsequent history unknown.

In addition to the above, an unknown Chinook Formula A was driven by Robert E. Dugo.