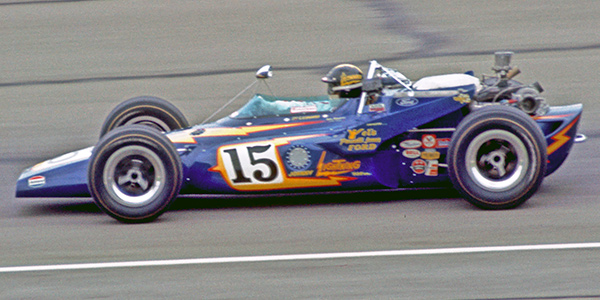 Led by George Bignotti, the Vel's Parnelli Jones Racing team built a new car for 1970, heavily based on the team's Lola T150. Driver Al Unser won the Indy 500 in one of these Colts and dominated the USAC championship.

Al Unser had been very successful in the Vel's Parnelli Jones team's Lola T150 in the latter half of the 1969 season, winning three races and adding three second-place finishes. For 1970, the team's veteran chief mechanic Bignotti decided to fabricate the team's own evolution of the Lola at the team's workshops in Torrance, California, the resulting cars to be called Colts. It was said at the time that Bignotti acquired a T150 monocoque from Lola and copied that, but whether the Lola monocoque was used to construct either of the team's two 1970 Colts is not known.

The Colt monocoque itself held 59 gallons of fuel, only slightly different to the 56 held by the Lola T150, and a further tank was bolted to the left side of the monocoque to hold a further 15, with one last gallon held in the collector tank which brought the total fuel load up to USAC's maximum of 75 gallons. The car was designed specifically for Ford's turbocharged 150 ci V8 engine, then producing 780 bhp at 9600 rpm. Hewland's LG500 4-speed gearbox was retained from the Lola design. The car was ready for the start of the season and was extensively used in Firestone tyre tests before the Indy 500. Unser was fastest throughout Indy practice, taking pole position, and then winning the race in a new record time. However, this turned out to be the only race the car won in 1970, as Unser used his updated Lola T150 when he won at Phoenix, Indianapolis Raceway Park, Milwaukee and Trenton. 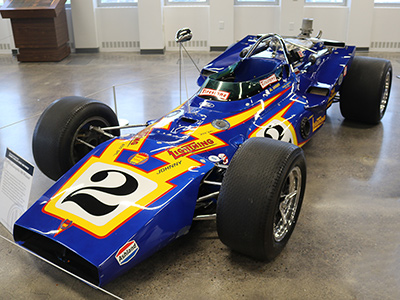 A brand new car fabricated by George Bignotti's crew for 1970, and raced by Al Unser for Vel's Parnelli Jones Ford as the #2 Johnny Lightning 500 Special. Unser dominated the 1970 Indy 500 in this car, and he also raced it at four other races later in the season. This is believed to have been Unser's car for the early 1971 races, winning three of them. It was then the backup car that Unser drove at Pocono and Michigan in July, and at Milwaukee in August, where it was wrecked. The car was retired, restored to its 1970 colours and used as a show car, later spending many years in the VPJ Collection's private museum in Torrance, CA. It returned to the Speedway for a race day celebration in 2010, and was acquired by the IMS Museum in May 2012 together with the rest of the VPJ Collection. Ran at the Goodwood Festival of Speed in 2011. On display in the Speedway Museum alongside the 1971 Indy 500-winning 1971 Colt in May 2012, August 2016, June 2017 and July 2019. On display at Monterey in August 2021., but back in the museum in September 2021.

A second 1970 Colt built for Joe Leonard to drive for Vel's Parnelli Jones Ford as the #15 Johnny Lightning 500 entry. Leonard only used the car at the Indy 500, Milwaukee in June which he won, and Ontario in September. As Al Unser didn't get his Colt 71 until the Indy 500, we can be confident that Leonard was also driving a Colt 70 in the early races of 1971, presumably his regular 1970 car. Leonard then used his new 1971 car at the Indy 500, at Milwaukee in June, and at Pocono, but at Michigan in August he was back to an older car, presumably this 1970 car. After damaging that car against the wall at Michigan, he was said to be driving Unser's 1970 short track car (i.e. an updated Lola) at Milwaukee in August before returning to his new 1971 car for the last three races of the season. Subsequent history unresolved.

Exactly how the two 1970 Colts were used in 1970 and 1971 remains the subject of detailed study. As the team's surviving Lola T150 had been updated to the latest bodywork and was also now called a Colt, there is little in contemporary reports to show how the three cars were used in 1970. Two more 1971 Colts were built for the following season, but the updated Lola T150 was sold to Agajanian-Faas Racers, so that should have left four cars in the stable for Bignotti to choose between, and only a detailed study of photographs of the cars at every race will resolve how they were used. Al Unser's 1971 Colt was taken out of service after the Rex Mays Classic in June 1971 so that it could be converted to turbo Offy power, which left Unser driving his 1970 Colt at Pocono and Michigan. Leonard also drove his 1970 Colt at Michigan but crashed it, leaving the team with something of a shortage of cars going into the Tony Bettenhausen 200 at Milwaukee in mid-August. As well as the T150 that had been sold to Agajanian-Faas Racers, another car had been sold to George Eaton who would make his debut in the car at Milwaukee. Given the shortage of cars, it seems highly unlikely he had been sold a 1970 Colt, so that would suggest he had an older Lola - but which one?

As the 1971 Colts had the larger fuel capacity needed for the 500-mile races, the team was likely to have kept those two cars aside for the California 500 three weeks hence in September, and used older machinery at the Milwaukee Mile. Unser was in his 1970 Colt-Ford but the press reported that Leonard would be in "Unser's 1970 Mile car". That gives us a problem, as Unser's 1970 Mile car had been the Lola T150, and that had already been sold. So had Bignotti resuscitated the other Lola T150? Or had he built an extra car out of the 1970 Lola monocoque that VPJ was said to have acquired from Lola to copy? Or was there no choice but to risk Leonard's 1971 Colt?

To exacerbate the team's problems, Unser wrecked his 1970 Colt at that August Milwaukee race, so the team finished the season using their 1971 Colts at every race. Bignotti's crew built up a third 1971 Colt monocoque during this time, but it was not needed until the start of the 1972 season.

Joe Leonard drove an unidentified car from the Vels Parnelli Jones Racing stable at Milwaukee's Tony Bettenhausen 200 in August 1971. Both the team's 1971 Colts would have been kept safe for the California 200 at Ontario two weeks later, so short track cars would normally have been used at Milwaukee. However, Leonard's 1970 Colt had been badly damaged at Michigan four weeks earlier, and press reports said that Leonard would be driving "Unser's 1970 Mile car" at Milwaukee. However, that car had been sold to Agajanian Faas Racers earlier in 1971, so it is unclear what Leonard used. The car either broke a camshaft gear or dropped a valve in practice, and Leonard did not start. After the race, Ray Marquette reported in the Indy Star that Leonard had been driving the car he intended to use at Ontario, so maybe it was actually his 1971 Colt.

Although the history of Al Unser's Colt after 1970 is relatively clear, the fate of the Joe Leonard car is still unresolved. The car does not appear to have been used after Leonard's accident at Michigan in July 1971, but in an interview about the team's cars in 1972, Vel Miletich made no specific mention of this car, implying that it had not been destroyed and that it was one of the three cars that the team had sold. These three cars were Lola T150 SL150/2 sold to Agajanian Faas Racers in early 1971, and two unidentified cars that were the same shape as 1970 Colts: one sold to George Eaton in mid-1971 and one sold to Salt Walther for early 1972. One of these must have been the Leonard 1970 Colt, but the identity of the other is unresolved.

Mike Lashmett, a junior crew member with VPJ in 1971, recalls that Joe Fukushima, the team's shop manager and chief fabricator, preferred to use countersunk rivets for parts of the chassis that were in the airstream, whereas the Lola monocoques were made with normal domed rivets. Motoring News mentioned this when the cars first appeared, commenting on their very close similarity to the Lola except that they were "flush-rivetted on the outer skin" (Motoring New 28 May 1970 p6). It should therefore be possible, if sufficiently detailed photographs can be found, to trace which of these cars was the ex-Leonard Colt and which was a Lola. 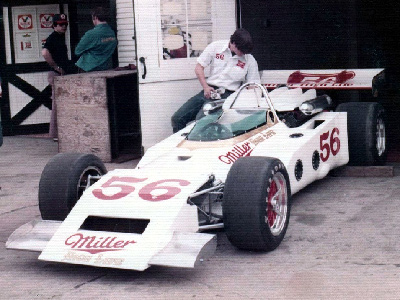 In 1971, Canadian department store heir George Eaton acquired a "Colt" from the VPJ team and it was run for him by the Fejer Brothers in the last few races of the USAC season. It was variously described as the car driven by Joe Leonard in the 1971 Indy 500 and the car used by Al Unser to win the 1970 Indy 500. It was probably neither. Eaton returned for 1972, when the car was described as a "1971 Jones", but failed his rookie test and announced his retirement from motor racing two weeks later. The car then passed to Jim Hurtubise, whose crew chief George Morris made some modifications to the chassis, including square sidepods and a chisel nose. The car was described as a 1969 Lola in press reports prior to the Indy 500, where Hurtubise was too slow to qualify. He did race it at Pocono in July, when it was wearing Miller High Life livery. At this point, the old car was finally put to one side. Mike Lashmett kept track of this car, and reports that it remained with Hurtubise until his death in 1989, after which it was bought from the estate by dealer/collector Chuck Haines (St Louis, MO). It remained in Haines' collection for many years until being sold to a Swiss owner. In August 2015 Reto Kuprecht (Zurich, Switzerland) advertised a partly rebuilt Lola T150, quoting the chassis number SL150/1, but describing it as the Eaton/Hurtubise car. He sold the car to Roger Ehrbar (Güttingen, Switzerland), who was continuing the restoration in November 2020.

Salt Walther (Dayton, OH) acquired a car from the VPJ team for 1972 which was described as a 1970 Lola. Walther qualified at Phoenix on 18 March but was bumped, and then crashed the car in a Firestone tyre test at the Indianapolis Speedway on 24 March. Hal McCoy, in an article about Walther for his hometown Dayton Daily News on 26 March, said that "the Lola was built in England, then three cars were copied off it by the Jones folks and dubbed P. J. Colts". Walther's chief mechanic George Morris repaired the car, and Walther qualified comfortably for the 500 in 27th position, only to retire from the race on the first lap with magneto failure. Walther's next event in the car was at Michigan in July, where he again qualified comfortably but was eliminated when he totalled the car in a pre-race crash with Lloyd Ruby, the same person who had bumped him at Phoenix. Having previously claimed that the $15,000 Lola had taken all the money he had, Walther immediately bought a McLaren M16 from Roger Penske for a reported $75,000. Mike Lashmett says that the Lola chassis was buried on father George Walther's property.

My thanks to Michael Ferner, Simmo Iskül, Luis Mateus and others for their work deciphering these cars. Also to Simon Hadfield and Ian Blackwell for their contributions, to Gerald Johnson for information and photographs from Bill Enoch's archive, and to Brian Speake. Thanks also to Mike Lashmett, co-founder of the Vintage Indy Registry and a crew member with VPJ in 1971, who has maintained a strong interest in these cars. His interview with Tim Matthews at The Museum of American Speed in 2018 is available on YouTube and is well worth watching.

Newspaper reports have been particularly helpful, especially Ray Marquette in the Indianapolis Star 11 May 1970 page 31, and Hal McCoy on the Walther car in the Dayton Daily News 26 Mar 1972 page 77.