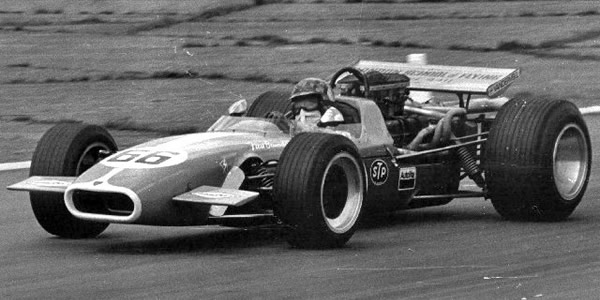 Following the success of their 1600cc Crosslé 12F in Formula B in the US, Crosslé built a 5-litre car for Formula A at the end of 1968, the Crosslé 15F. Two raced in the US but did not enjoy any great success. A third 15F raced for some years in the British F5000 series.

Although listed as a 1968 design, the 15F first appeared at the end of that year and was intended for competition in 1969. The first two cars to leave the factory went to the US in October 1968, one for US Crosslé dealer Roger Barr and one for Ralph Loesser. They would race in the SCCA’s Northeast Division, where the 12F and 14F Formula B cars had proved popular, and where the Area 1 Championship was proving to be a popular new layer in between SCCA Nationals and more minor club events. Unfortunately, there was relatively little coverage of the Area 1 Championship, except in the New England Region “Pit Talk” publication, so we have little knowledge of how the 15Fs performed. Meanwhile a third car was also in the process of construction in October 1968 and was due to go to the US, but stayed in the UK and eventually appeared in the 1970 British F5000 series for Fred Saunders who used a Rover V8 engine.

Tim Osborne, owner of the Barr car and now also the Stanton car, is painstakingly constructing the history of all three cars, and OldRacingCars.com is delighted to be able to publish the results of his work. All and any help would be gratefully received. Please e-mail Allen at allen@oldracingcars.com or Tim at tim@zentekno.com if you can add anything. 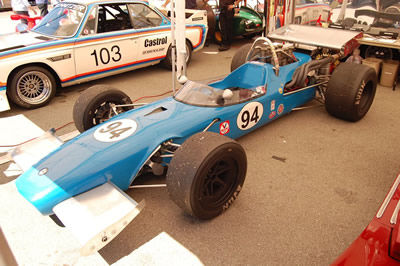 The Crosslé 15F of Craig Schrontz at the Rolex Monterey Motorsports Reunion in August 2015. Copyright John Zimmermann 2015. Used with permission.

Built for 1969 season. Roger Barr (Glastonbury, CT): raced in US SCCA races 1969 - Francis T. 'Terry' Grant (Philadelphia, PA) and his mechanic Ray Heppenstall: raced by Francis Grant at Sebring FA race in October 1970 - Gene Stanton (Philadelphia, PA) October 1971- Vic Myette February 1972; last raced 1972 and stored since 1973. Sold by Myette to Tim Osborne (Woodinville, WA) 2001, restored and raced in US vintage racing. Sold by Osborne to Craig Shrontz (Seattle, WA) in 2011. Raced by Shrontz in SOVREN events in 2014. Raced at the Monterey Pre-Reunion in August 2015, and the Sovren Fall Festival in September 2017. Listed as being present at the WeatherTech International Challenge at Road America in July 2018. 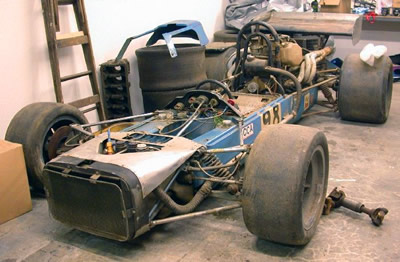 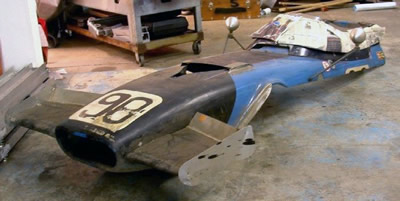 Built for 1969 season. Delivered to Ralph Loesser ... later to Terry Grant rejoining the ex-Barr car - Gene Stanton (Philadelphia, PA) October 1971: raced by Stanton at Lime Rock in 1972 and at Watkins Glen and Pocono in 1973. Still running in SCCA Nationals several years later (e.g. #98 blue Crosslé entered in FA class by Stanton at Watkins Glen SCCA National 17-18 Jul 1976). Parked by Stanton and unraced until his death in December 2003. The car was bought from Stanton's estate by Tim Osborne (Woodinville, WA) 2004, owner of the ex-Barr car. Retained unrestored until 2011 when Osborne sold the ex-Barr car and restored C15F6840 for vintage racing. Sold in mid-2019 to John Murphy (London) and returned to the UK. 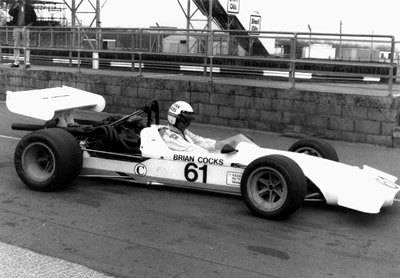 Brian Cocks in his 15F at a HSCC test day about 1990. Copyright Ted Walker (Ferret Fotographics) 2001. Used with permission.

Built in 1969 but not delivered and not then used until 1970 season. Fred Saunders: raced in UK 1970-1971 - Brian Leonard April 1972: appeared at Oulton Park 29 May (DNS) and Mallory Park 18 Jun 1972 (retired). To Richard Evans (Haverfordwest, Pembrokeshire) hill climbs late 1972 (e.g. Pontypool Sep 1972, Pontypool late April 1973 and Gower in mid-Oct 1973). Presumably the F5000 Crossle advertised by Bill Morris (Dale, Pembrokeshire) May 1975. Then entered by R.S.G. Blake at Bouley Bay 24 Jul 1975 as a 3.5-litre Buick-engined 15F and advertised by Bob Blake (Jersey) in April 1976 mentioning that it was "ex-Saunders" and then had "Chevron bodywork". Next seen when advertised from Birtsmorton (Worcestershire) May 1978 still with the Chevron body. David Andrews adds that this owner would have been Tim Cameron. Unknown until purchased from Ian Giles by Simon Brien (N. Ireland) who sold it on to Brian Cocks. Cocks had the car restored at the Crosslé factory in 1988 and fitted a Chevy engine instead of the original Rover V8. Raced by Cocks in HSCC Pre '71 Championship events, winning its class in 1989. Advertised by Cocks in February 1990 and sold to Frank Nowak some time in the early/mid 1990s and used in historic racing. Nowak still had it in 2001. Later to Stephan Collisi (Germany) and used in historic racing in 2004. Collisi retained the car until September 2012 when he reported on his website that "the 15F has been sold and went on to Austria to be used in the Histocup series". As of September 2015, the car has not featured in any Histo Cup Austria events. Next seen at the Jim-Clark Revival in Hockenheim in 2019, when it had been immaculately restored and was driven by Manfred Nord.

This history was derived from the extensive work of Tim Osborne. His fuller and more detailed history can be read at http://zentekno.com/15f. Tim lists his references as: