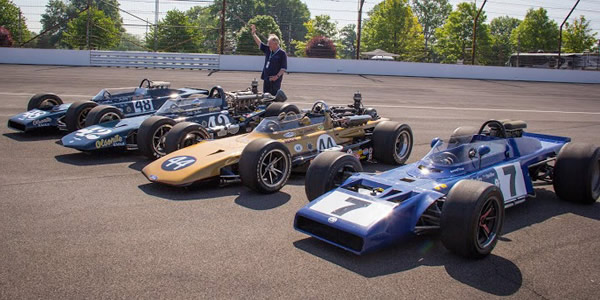 Dan Gurney reunited with all four 1969 'Santa Ana' Eagles at the Speedway in 2015. Copyright Can-Am Cars Ltd. Used with permission.

The 1969 Eagle was a completely new design, from young designer Tony Southgate. It used the wedge profile popularised by the Lotus 56, together with Brabham-style suspension. Although very effective on road courses, the design generated too much drag to be competitive on ovals.

Tony Southgate had learnt his trade at Lola, where he had worked on the T70 sports cars, and had then spent a year at Brabham before joining AAR late in 1967. As was so common with Indy car teams at that time, the basic layout of the car was based on existing successful designs, the wedge shape being based on the Lotus 56 and the Brabham-style outboard front suspension was the same as that used on the successful Hawk and Mongoose cars. The car was called the Eagle Santa Ana, named after AAR's home town. The first car was not ready until late April, leaving very little time to develop such a radically new design, and the team struggled for straight line speed during the month of practice at Indianapolis. Eagle tried a variety of nose designs, eventually settling on something marginally quicker than 1968. With the car close to being sorted, all three ran very well in the race, with Eagles running 2-3-4-5 at one point. Dan Gurney's own car, with AAR's own 318 ci stock block Ford V8 engine, finished the race in second place.

Later in the season, the stock block Eagle proved very effective on road courses, with Gurney taking pole position at Continental Divide, winning at Indianapolis Raceway Park, winning again at Brainerd, and taking pole at Seattle. He started 1970 with another win, at Sears Point. AAR's two well-developed cars were then sold off but rarely raced again. All four cars came back together for the first time since 1969 for the Dan Gurney celebration at Indianapolis in 2015. The history of several cars is incomplete; if you can add anything to our understanding of these cars, please contact Allen Brown (allen@oldracingcars.com). 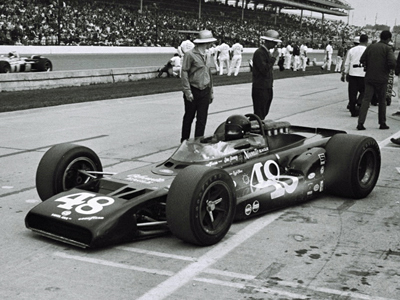 Dan Gurney in his #48 race car at the Indy 500 in 1969. Part of the Dave Friedman collection. Licenced by The Henry Ford under Creative Commons licence Attribution-NonCommercial-NoDerivs 2.0 Generic. Original image has been cropped.

New for Dan Gurney to race at the 1969 Indianapolis 500 as the #48 Olsonite entry, fitted with a 318 ci Gurney Weslake Ford stock block V8. Finished 2nd at Indy and presumably the car in which Gurney finished 2nd at Continental Divide, 1st at Indianapolis Raceway Park, 1st and 2nd at Brainerd and 1st at Sears Point at the start of the 1970 season. It was also presumably the Eagle, still with Gurney Weslake Ford engine, that Swede Save raced at Continental Divide and Indianapolis Raceway Park later in 1970. At the end of the year the car was sold to Shelby-Dowd, a new team set up by Carroll Shelby and Al Dowd, based in the old Shelby headquarters in Venice, CA, and with Carroll Smith as crew chief. Drag racing champion Danny Ongais was the intended driver but he stepped down after crashing the car during practice at Phoenix in March. Jerry Grant took over the drive and qualified the car at Indy, only to be bumped from the field. It was raced by Jim Malloy at two races later in 1971, and advertised by Al Dowd in December. Apparently not used again as the name of sponsor Norris Industries was still visible on the unrestored car in Walter Goodwin's workshop in 2014. On display in the Indianapolis Motor Speedway Museum in May 2015. Still in Evernham's collection in November 2019. Offered for sale by Evernham at the Mecum Auctions sale in May 2022. 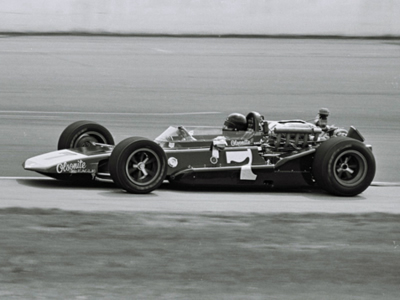 The backup #7 Eagle 69 being used in practice at Indy in 1969. Part of the Dave Friedman collection. Licenced by The Henry Ford under Creative Commons licence Attribution-NonCommercial-NoDerivs 2.0 Generic. Original image has been cropped. 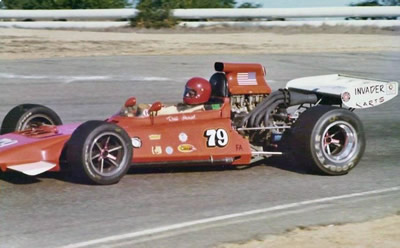 Built for 1969 as the #7 backup but only run briefly in practice at the Indy 500 and then not used again. Stayed at AAR until late 1973 or early 1974 when sold to Bob Allen (Ripon, CA) who had wrecked his 1968 F5000 Eagle at Laguna Seca in October 1973. Rebuilt for Formula A with a Chevy V8 and raced in an SCCA National at Laguna Seca in June 1974 and at a National at Portland, which he won. In practice for a race at Sears Point in early September Allen crashed again. The car was later damaged more severely when "being driven down a road in rural Manteca CA"! Allen replaced it with a 1974 F5000 Eagle for the 1975 season, and the Indy Eagle was sold to Ross Hansel (San Jose, CA) who rebuilt it, with Allen's help, over the 1974/5 off season. Debuted by Hansel in a San Francisco Region Solo One event at Laguna Seca in May 1975. Raced by Hansel to sixth in the Sears Point SCCA National in April 1976 and then advertised by Hansel 19 Jun 1976 "Eagle Formula 'A', one race on complete rebuild … concours condition, ready to race". Hansel's son Doug recalls that it was sold to Phil Rendahl (Redding, CA), who ran it in SCCA National later that season. Rendahl raced the car in SFR Formula A in 1978, finishing second in two Regionals at Sears Point in April and May 1978, but then he crashed it at Laguna Seca in June 1978.

Then unknown until sold by Robert Jordan of Investment Motor Auto Inc (Chicago, IL) to Bob Pond (Palm Springs, CA) in August 1990. Rebuilt with a 320ci Ford V8 and raced at the Palm Springs Road Races later in 1990 by Robs Lamplough. Raced again by Lamplough at the same event in 1991 and then retired to Pond's museum at his estate in South Palm Springs. Pond died in 2007 and the car was offered for sale by RM Auctions that year but did not sell. It was offered again in August 2014 and was sold for $104,500. In 2015, the new owner was revealed to be Phil Gumpert (Noblesville, IN). All four 1969 cars appeared together at the Speedway in May 2015. Appeared at the Historic Indycar Exhibitions in 2016 and 2019. 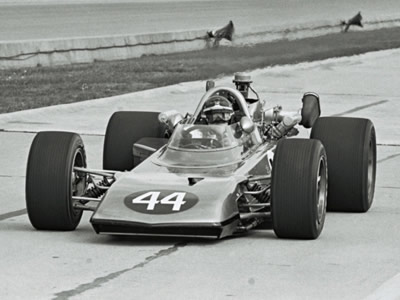 Joe Leonard in Smokey Yunick's City of Daytona Beach Eagle at the 1969 Indy 500. Part of the Dave Friedman collection. Licenced by The Henry Ford under Creative Commons licence Attribution-NonCommercial-NoDerivs 2.0 Generic. Original image has been cropped.

New to stock car racing expert Henry "Smokey" Yunick (Daytona Beach, FL) and entered in the 1969 Indy 500 for Joe Leonard to drive as the #44 City of Daytona Beach Spl. Yunick did not enter the car in any further races and its history is unknown until it was advertised by Chuck Haines (St. Louis, MO) in February 2008. The car had received "complete, ground up restoration by A.J. Watson" and was in Leonard's gold #44 livery. It appeared at the Goodwood Festival of Speed in July 2008, and all four 1969 Eagles appeared together at the Speedway in May 2015. Sold by Haines around 2020 to Ray Skillman (Greenwood, IN). 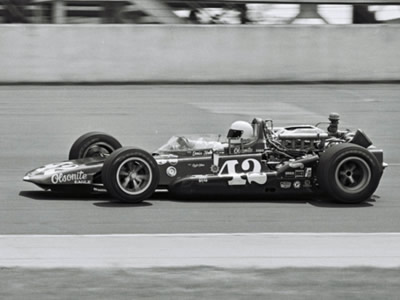 Denny Hulme in his #42 Olsonite Eagle at the 1969 Indy 500. Part of the Dave Friedman collection. Licenced by The Henry Ford under Creative Commons licence Attribution-NonCommercial-NoDerivs 2.0 Generic. Original image has been cropped.

New for Denny Hulme to drive at the 1969 Indy 500 as the #42 Olsonite factory entry. Hulme ran second behind Mario Andretti for a while, before his clutch let go. Hulme was only entered for Indy but this is probably the car raced four times later in the season by Swede Savage, its original 159ci Ford quad cam turbo V8 having been replaced by one of the team's 318 ci Gurney Weslake Ford stock block V8s. Identified by a Laycock card as the Eagle-Ford of Bud Morley (Denver, CO) at the Speedway in 1970, crewed by chief mechanic Carroll Horton of ABC Engines assisted by Dick Corrow, and then said to be a car just purchased from Dan Gurney. Morley did not start after failing to complete his Rookie Test, but then fitted the car with a Chevrolet V8 and raced it at Continental Divide later in the season. He was unable to qualify the Eagle-Chevy at Phoenix in November 1970 and again in March 1971, after which he returned to F5000. The Eagle is then unknown until 1976, when Chuck Bartlebaugh (Rochester, MI) acquired an ex-Indy car directly from AAR, which he recalled was still set up for ovals. He entered it as as the #26 Bartlebaugh Eagle, a "1970 Eagle", at the Riverside F5000 race in October 1976 but failed to start. He set the 38th fast time in practice, but the throttle stuck open during practice and although Chuck was able to bring the car to a halt without injury, the engine was damaged and he could not start the race. Bartlebaugh, who later ran the Center for Wildlife at Missoula, Montana, said that his brother sold the car in the Chicago area, where it was to be raced on short ovals. According to the Indy Star, the car was sold by the Bartlebaughs to Dean Vetrock (Racine, WI) in April 1980. He fitted it with a 355 ci Chevrolet V8 and ran it in several Indy events, but the only time he qualified was in the poorly-supported USAC race at Pocono in June 1981. Sold by Vetrock to Chuck Haines (St Louis, MO) in the fall of 1981 and later restored for him by Walter Goodwin. At the Goodwood Festival of Speed in June 2006 completely restored to Hulme's dark blue #44 livery. Bought late 2007/early 2008 by Doug Magnon and put on display in the Riverside International Automotive Museum (RIAM), also having occasional outings at historic events. After Magnon's death in February 2015 the car remained in RIAM until sold by RM Sotheby's at Monterey in August 2016 to Mike Moss (Ottsville, PA).

The 1969 Eagles were regarded as a complete flop, even though Dan Gurney used one to win on the road courses at Indianapolis Raceway Park, Brainerd and Sears Point, and only the two works cars were raced again after that year's Indy 500. The ex-Gurney chassis 701 went to Carroll Shelby for 1970 and raced a few times in 1970 and 1971, and the ex-Hulme chassis 704 was used by Bud Morley a couple of times. Either the unraced spare car 702 or the ex-Hulme 704 went to Charley Hamill for 1971 but it would appear that whichever car he had returned to AAR.

In December 1970, successful powerboat racer Charley Hamill (North Hollywood, CA) bought an Eagle Indy car from Dan Gurney. Hamill described it as the "twin" of the car Gurney raced in the Seattle USAC race in 1969, so it was presumably a 1969 Indy Eagle. After testing the car at Willow Springs, Hamill left it gathering dust until August when he recruited former Honda F1 driver Ronnie Bucknum to race it in the Seafair 200 USAC Road Racing Championship event at Seattle. Bucknum had to haul the car to Seattle himself and despite recruiting Jerry Ruth to crew the car, could not get it ready for qualifying. He was allowed to start the second heat but retired after a single lap. Nothing more was heard of the car.

Chassis 702 was eventually sold to Formula A racer Bob Allen and was used briefly in SCCA Nationals, and chassis 704 also appeared in Formula 5000, but Chuck Bartlebaugh failed to start its only known appearance in that specification, before ending its frontline career as a starter in the notorious June 1981 Pocono 500, a race held by USAC during the CART/USAC schism which attracted such a poor field that almost anything USAC could find in running condition was allowed a start.

My thanks to Gerr Measures and Simmo Iskül for their help with these histories. Thanks also to owners Chuck Bartlebaugh, Dean Vetrock, Chuck Haines, Doug Magnon and Mike Moss.