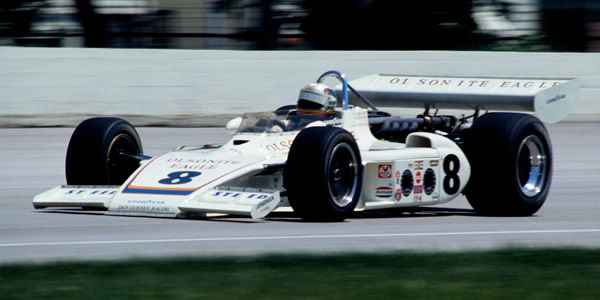 The 1972 and 1973 model Eagle Indy cars are often confused. AAR continued to produce 1972 model cars for customers in early 1973, but also built four cars to a revised 1973 specification for their own in-house team.

Given the speed of Bobby Unser in the 1972 Eagle, AAR were able to sell a huge number of customer versions, including to major teams such as Leader Card, Patrick Racing, Lindsey Hopkins, and Jerry O'Connell's Sugaripe Prune. 17 of the 33 starters at the 1973 Indy 500 were 1972-series Eagles. For AAR's own team, the company produced an evolved version with chassis numbers starting 7301, but the differences between the 1972 and 1973 models can be hard to spot. The easiest to see are that the cooling vent was further up the front of the cockpit and that the rollhoop leans back slightly. The tub is deeper behind the driver, and is also wider, although the width is difficult to see in photographs. Fuel ports are not helpful for distinguishing these cars, as both the 1972 and 1973 cars had two fuel ports on the side, but one of these was covered on some - but not all - cars after USAC reduced fuel tank capacity to 40 gallons in mid-1973.

The first 1973 car was tested by Bobby Unser at the start of the year but destroyed in an accident at Ontario Motor Speedway in March. A second car was quickly built up, and this became Unser's regular early-season car, and then his short track car later in the year. A third car, 7303, was built for Jerry Grant to drive at the Indy 500, but this car was then sold off to regular customer Patrick Racing for Gordy Johncock to drive. The fourth car, 7304, was Unser's Indy 500 car and then his car at Pocono, Michigan and Ontario. Two further cars were built later in the season for customers Fletcher Racing and Patrick Racing, the latter being built for a Ford V8 engine. Unser was again among the quickest drivers but only won once, at Milwaukee in June. Johncock won two races in his ex-Grant car, plus the Indy 500 in his older 1972 car, while teammate Wally Dallenbach won three races that season in his 1972 car.

The prototype 1973 Eagle was destroyed by Bobby Unser in a testing accident at Ontario Motor Speedway in March 1973 in what Competition Press & Autoweek described as "a grinding and fiery crash".

After Bobby Unser destroyed the prototype '73 Eagle while testing at Ontario, AAR had just five days to build up a new car in time for the first race, at Texas World Speedway. This car must have been chassis 7302, and photographs show it was the car he raced at Trenton two weeks later. AAR had two more '73 cars ready for the Indy 500 and if Jerry Grant's car has been correctly identified as 7303, Unser's must have been chassis 7304. Exactly how 7302 was then used is still being resolved, but it is assumed for now to be the car he crashed at Milwaukee in August.

The unrepaired chassis then sat on pallets at AAR until the autumn of 1975 when it was bought by Joe Hunt (Torrance, CA) and repaired, to replace the team's antique Gerhardt. The Eagle first appeared in Hunt's colours at Phoenix at the end of 1975, where John Martin drove it, then at Indy in 1976, with Rick Muther in the seat. After the 1976 Indy 500 the car was driven by Gary Bettenhausen, Bob Harkey and Phil Krueger up to 1979. It was then rebuilt with 355 ci Chevrolet V8 for 1981 but was crashed heavily at the 1981 Indy 500.

Apparently repaired and reappeared in August 1981 entered by Joe Hunt Magneto as the #89 for Phil Krueger. Raced again by Krueger in early 1982 and presumably the #89 car raced later in the season by Dick Ferguson and Jerry Sneva. Then unknown until acquired by Jack Danko (Laurel Run, PA) in January 2004, having previously been owned by Jim Cosner. Danko rebuilt the car to be used in Pensylvania hillclimbs by his son Darryl Danko, starting at the Giants Despair Hillclimb in July 2005, an event he later won in 2011. It is reported that this car carries the chassis plate 7302. In August 2014, he set fastest time at the Polish Mountain Hill Climb near Flintstone, PA. 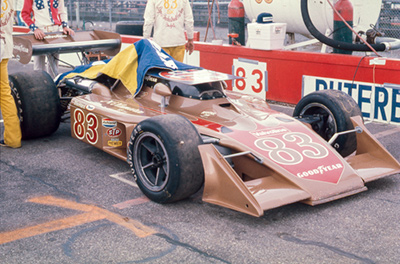 New for Jerry Grant to race at the 1973 Indy 500 as AAR's #48 Olsonite Eagle. Grant was not entered at the Pocono 500 and the car was sold to Patrick Racing prior to that race. It was raced by Gordy Johncock for the rest of the season as his Indy-winning car was wrecked at Pocono. Raced by teammate Wally Dallenbach in the early races of 1974, then brought to the Indy 500 to replace a '74 car damaged by Johncock in practice. Raced by Johncock at Indy and at Milwaukee in June, and believed to have been his short track car for the rest of the year. Then to Lee Elkins and entered as the #83 McNamara Eagle for Bill Puterbaugh at Indy and at Pocono in 1975, qualifying for both. Retained for the 500-mile races 1976, when Puterbaugh qualified for the Indy 500 and Ontario, and also in 1977 when, now as the #16 entry, he again qualified for the Indy 500. Immediately after qualifying, the car was acquired by George Walther who wanted to put son Salt into it but after an uproar, Puterbaugh drove it in the race. Then from Walther to Bob Olmstead who fitted a Volker V12 engine for Indy 1978 but did not get the car on track. The car was stored until after Olmstead's death, and was sold to Bill Simpson in the early 1990s. It was restored as a show car for Simpson by Wayne Leary and put on display in North Carolina to represent the Eagle that Simpson had raced at Indy. Sold around 2013 to Jeff Urwin (New York, NY). This car was at Paintergeek Paintworks in Indianapolis, IN, from January to April 2019 being stripped of the Bill Simpson Nikon #38 livery and returned to its original 1973 AAR livery.

New for Bobby Unser at the 1973 Indy 500, as AAR's #8 Olsonite entry. Unser qualified second but retired at mid-distance. He then drove the same car at Milwaukee in June, winning from pole position. The car Jerry Grant had raced at the Indy 500 was sold to Patrick Racing, leaving Unser with 7302 and the new 7304. Exactly how these cars were used in 1973 is still being resolved but, for now, it is assumed that 7302 was the car he heavily damaged at Milwaukee in August, leaving him with just chassis 7304 to the end of the season. In the final race, at Phoenix in November, Unser destroyed his car in a massive accident. Autosport reported that this car was repaired and sold to the VPJ team, but photogarphs show that VPJ had new 1974 cars from the start of the season, so it seems likely that 7304 ended its life at Phoenix. 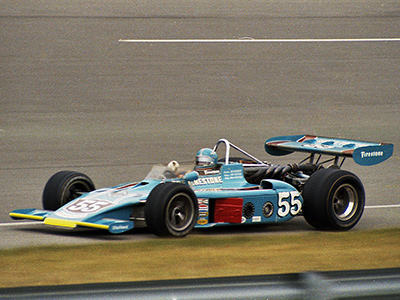 Bob Fletcher team had owned a pair of 1972 Eagles but after Art Pollard's fatal accident at Indy in 1973, Fletcher acquired a new 1973 car which was entered as the #55 Cobre Firestone entry for Lee Kunzman from Ontario in August onwards. Used for the rest of 1973 but then crashed heavily in testing at Ontario in December when Kunzman hit the wall and needed to be taken to hospital. The 1973 Eagle was not seen in Fletcher stable after this and is presumed to have been destroyed. 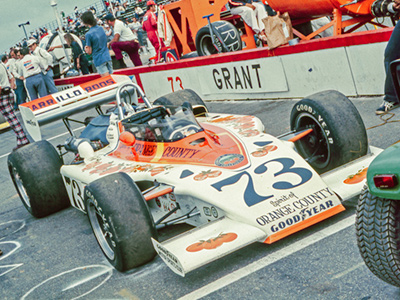 Patrick Racing acquired a new 1973 Eagle after the 1973 Indy 500, probably either chassis 7305 or 7306. It was fitted with a Ford V8 engine and used in practice at Ontario by Graham McRae as the #60 entry, but failed to qualify. Raced by Dick Simon at two later races that season. It may have been Steve Krisiloff's intended #60 Patrick entry at Indy in 1974, identified by Hungness as an Eagle "of 1973 vintage", but the car Krisiloff actually qualified was an older 1972 car. The 1973 car finally reappeared when raced by Krisiloff at Pocono and a few races later in the 1974 season, by which time it had a turbo Offy engine. Sold by Patrick Racing's chief crew George Bignotti to Fred Carrillo (San Juan Capistrano, CA) and entered as the #73 Spirit of Orange County entry for Jerry Grant at Ontario at the start of 1975. Later in 1975, the car was fitted with a 209 ci AMC stock block V8 engine developed for Carrillo by Dick Jones, and was driven by Grant in late 1975 and early 1976, now with Dave Klym as chief mechanic. Carrillo then acquired a newer Eagle chassis for the AMC engine and the 1973 Eagle was rebuilt in 1977 to Offy specification and sold to Jim McElreath for son James to drive as the #26 McElreath Racing entry in 1977. Then for Jim McElreath in 1978. In 1979, McElreath acquired a second Eagle, apparently the ex-O'Connell 1974 car, which was numbered as the #23 with the older car continuing as #26. The older car continued in use until 1981. In 2017, it was reported that this was chassis 7306, and had remained at Jim McElreath's home in Texas from 1983 until his death in 2017. It was then owned by Angus Russell (Ormond Beach, FL). Still owned by Russell in December 2021.

As the differences between the 1972, 1973, and 1974 Eagles are quite subtle, it has proved difficult to determine how the surviving 1973 Eagles were used after 1973. One such mystery is the Fletcher team's Leary-modified 1973 Eagle used by Bobby Unser at Milwaukee in 1976. As the team's original 1973 car is believed to have been wiped out in a test at the end of 1973, it's not clear what this car could have been.

In 1976, Bobby Unser moved to Bob Fletcher's Cobre Tire team, where he had the choice of two 1974 Eagles, one standard and one heavily modified by ex-AAR mechanic Wayne Leary. At Milwaukee in June, photographs show that Unser drove a third Eagle, this being a 1973 Eagle that had been modified in the same way as the 1974 Leary-Eagle, with radiators moved from behind the front wheels to just ahead of the rear wheels. After using the modified 1974 car one more time at Pocono, the team withdrew, and when they returned in August, they focused on the standard 1974 Eagle, so Milwaukee was the only appearance of the 1973 car.

These histories fit together deceptively easily, so it is worth reviewing the assumptions that have been made. Firstly, the car tested and wrecked is assumed to be 7301. The replacement for Unser to drive at the first race is assumed to be 7302,and photographs show Unser used that same car at Trenton. Jerry Grant's car at the Indy 500 was reported to have gone to Patrick Racing, and that ex-Patrick car, later owned by Bill Simpson, was identified during restoration as 7303. That in turn means that Bobby Unser's new car for the Indy 500 car must have been 7304. Photographs show that Bobby Unser raced his Indy 500 car at Milwaukee in June, Pocono, Michigan in July, Ontario, and Michigan in September, so it is assumed that he used his early-season 7302 at Milwaukee in August, where it was badly damaged. He then raced the same car at Trenton and at Phoenix in November, but it is not possible to say from photographs where that was his Indy-to-Michigan car. However, if 7302 was not repaired for two years, then Unser's late-season car can only really have been 7304. That car's destruction at Phoenix in the final race would explain why 7304 is not to be found today. That leaves the two customer cars which were presumably 7305 and 7306. As the car owned by Jim McElreath has been reported to be 7306, the Fletcher car is assumed to be 7305. New evidence may show that one of these assumptions is wrong, but for now, the histories seem to work.

My thanks to Simmo Iskül for his work separating the 1972, 1973 and 1974 Eagles, and then filtering out the histories of the six individual 7300 cars. Thanks also to Michael Ferner, Luis Mateus, and to Bruce Selby, who told the story on Facebook in March 2021 of the purchase of the damaged 7302 tub from AAR.