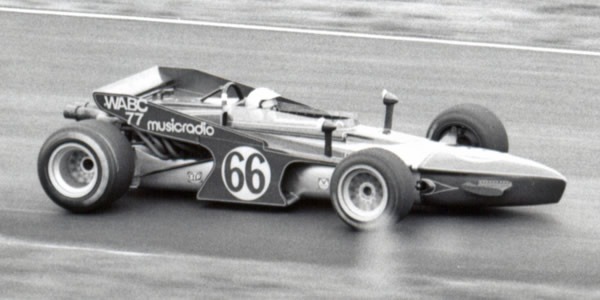 Jim Hall was one of the most innovative and ingenious engineers to emerge from the 1950s hot rod tradition and the boom in US sports car racing. Funded by his family's oil wealth and that of his partner Hap Sharp, and helped somewhat by his close relationship with General Motors' R&D team, Hall built a series of sports cars during the 1960s that constantly redefined the 'state of the art' in unlimited sports racing, and revolutionised construction techniques and aerodynamics. Tempting though that story is to tell, Richard Falconer and Doug Nye have already told it wonderfully in their 1992 book “Chaparral”.

In 1966, Don Gates at Chevrolet R&D designed the GS-III, an experimental single seater that GM hoped would become the basis of a Chaparral Indy 500 project. Despite GM's enthusiasm, Chaparral had more than enough on their plate at this time with the 2C and 2E sports car designs, based in part on GM's previous GS-II concept car and the Indy car remained untouched at Chaparral for several years. 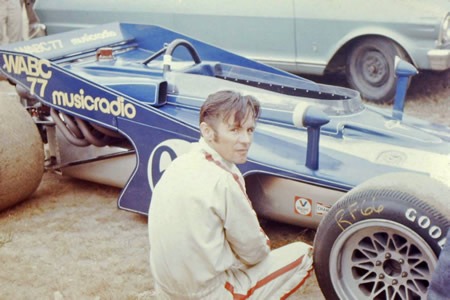 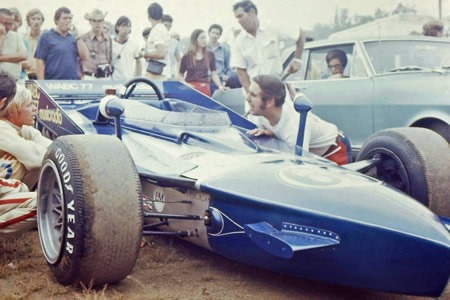 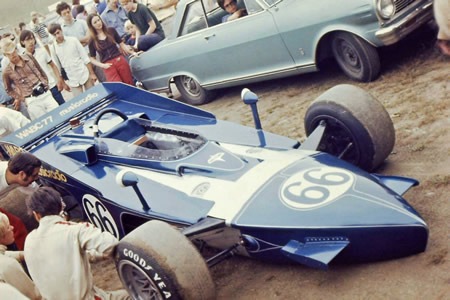 In 1971, with the team having withdrawn from sports car racing, the Indy car was resuscitated as a F5000 car for Franz Weis, Hall's mechanic, engine builder and test driver. The low-key project joined the series late in the season, entered, as per Chaparral tradition, at #66. Weis was 20th fastest in qualifying at Donnybrooke (R7 15 Aug 1971), off the pace by some 9%, and managed only 14th place in Heat 2. Not exactly in line with Chaparral tradition. Lime Rock (R8 6 Sep), the final race of the 1971 season, was no better: Weis managed 13th in qualifying, now just 5% back from David Hobbs' McLaren M10B, but crashed on lap 1, ending the car's short career. The bent remains are said to survive, awaiting the generous funding that would be required for a restoration. In the meantime, one of the 2As made a much more interesting restoration project for Weis.

Hall and his Chaparral team soon returned to racing, combining with Carl Haas' F5000 team in 1973 to take the championship before taking on the Indy 500 in 1978. With Al Unser, a Lola and a Cosworth DFX, Hall won first time out. They then built the Chaparral 2K, the first truly successful Indy ground-effect car which would win the Indy 500 and the CART series.

If anyone can help with some background on this little known car, please email Allen at allen@oldracingcars.com.

The colour photographs shown here were taken at Lime Rock. They are copyright Michael Schmidt and are being used with the kind permission of Corey C. Jordan who restored the images and published them.