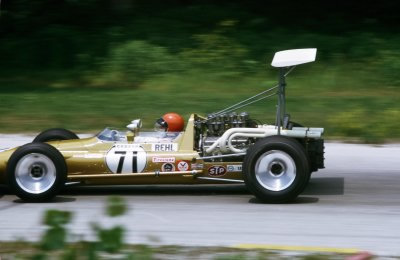 Almost too quick for the lens of Tom Schultz is Peter Rehl's Cooper T90, shown here at Road America in 1969. Copyright Tom Schultz 2006. Used with permission. 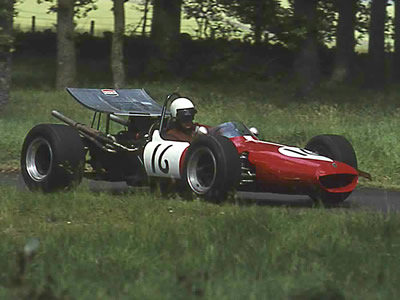 Although only the T90 was built specifically for F5000, a number of older Coopers ran in Formula A in the US in the late 1960's and three ex-F1 cars were converted to F5000 in the UK: a Cooper T66, a Cooper T86B and a Cooper T86C. Like its contemporaries, the McLaren M10A and the Surtees TS5, the T90 was derived from a 1968 F1 design but the lack of works development and the closure of Cooper meant it had little chance of success.

The very first Formula A Cooper had been the ex-works Intercontinental Cooper T53 which Hap Sharp had bought in 1961 and still had in his garage four years later when the 3-litre Formula A came into force. It had a 2.5-litre Climax engine and Sharp won with it at Continental Divide in May 1965, one of the first significant FA races. Also in 1965 Pete Lovely had a 1960 Cooper T51 fitted with a 2.5-litre Ferrari 625LM engine and Don Radbruch had the ex-Indy Cooper T54 with a Buick engine. These were all effectively Intercontinental Formula cars, which had lingered on in the US in 1962 after other countries had abandoned it. These aged relics were supposed to be the basis of the new formula but there simply were not enough of them.

The next Formula A Cooper of note was the 1959 Cooper T51 which was fitted with an Alfa Romeo engine when Ed Mackey took it to second place at the 1966 SCCA Runoffs. US Formula A Cooper entries in 1967 and 1968 included Tom Jones' Cooper T82-Climax V8 and Walt Mathewson's ex-Lovely car, but other cars are still mysteries, including more Climax-powered cars with Jerry Wilson, Paul Wigton (later with a Chev) and Guy Wooley, the Cooper Ansen-Chevy of Clint Cavin, the Cooper-Chev of Spurgeon May and the mystery car of Tom Wingett. Later, Gary Gove and Tom Masterson appeared in a Cooper T53-Chev that had originally built for hill climbs in Northern Ireland. Brian Haupt also ran a Cooper-Climax in SCCA racing for many seasons in the Kansas/Oklahoma area.

There was also a "F5000" Cooper in Scottish hill climbs, shown on the right, when Andrew Goodfellow (Falkirk) squeezed a 4.7-litre Chevrolet V8 into what was said to be an ex-F3 Cooper T76 for the 1969 season. The car ran for several seasons without major success but with great enthusiasm.