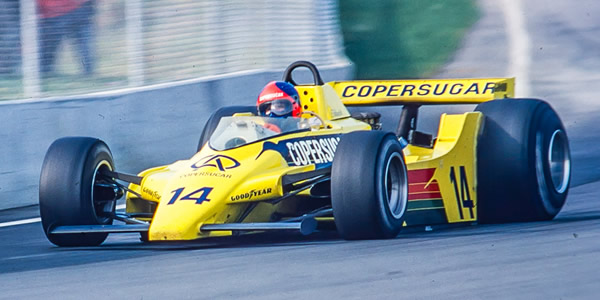 Emerson Fittipaldi in the Fittipaldi F6A at the Canadian Grand Prix at Montréal in 1979. Copyright Bruce Stewart 2017. Used with permission.

Designers Giacomo Caliri and Luigi Marmiroli, both ex-Ferrari, "virtually changed everything on the F6 in two months". The monocoque was much the same as on the F6, although stiffened with strengthening tubes. New rocker arm suspension was designed front and rear, and its conventional sidepods were "rather like those on the Williams", according to team manager Peter Macintosh. However, Caliri had not been to a GP all season, and underestimated how far F1 had developed. When the revised car first appeared at the German GP, it had big problems with the skirts sticking, and even when they weren't sticking they were ineffective. There was little time to change anything before the Austrian GP, where the problem with the skirts continued and Emerson also commented that the car was too heavy.

Despite wind tunnel work before the Dutch GP, the car was no better, with dreadful handling. At Monza, although the weight and stiffness were still not resolved, the handling was at least improved allowing Emerson to have a good race, finishing eighth. Stronger suspension was fitted for the last two races, but the F6A's ground effects simply didn't work, and Emerson was always on the last few rows of the grid. A second F6A was built, and Alex Ribeiro drove it at the two North American GPs, but could not qualify for either. As soon as the season was over, Fittipaldi did a deal to buy up the Wolf operation, complete with designer Harvey Postlethwaite, and run Postlethwaite's Wolf WR7 design in 1980. Bellamy departed for Ensign, where he would design the Ensign N180.

Of the two F6As, one went into a German museum before being recovered for historic racing in 1990. The other was still at the factory when ADA Engineering took over, and was sold to an Italian owner later in 1983. 37 years later, it has still not resurfaced.