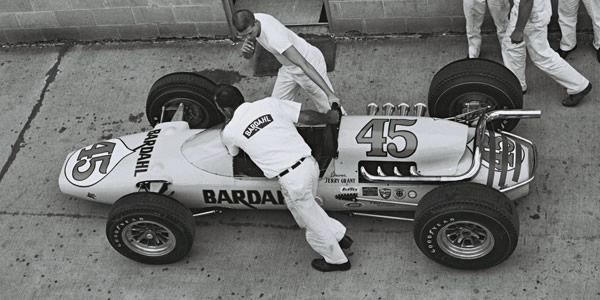 Jerry Grant's #45 Gerhardt is pushed to the track at Indianapolis in 1964 by Harry Salwasser (bottom) and a young Dennis Johansen (top). Part of the Dave Friedman collection. Licenced by The Henry Ford under Creative Commons licence Attribution-NonCommercial-NoDerivs 2.0 Generic. Original image has been cropped.

The first Gerhardt Indy car was a monocoque described as a "lookalike" of the successful Lotus Indy car design, and built for 1964 by Fred DeOrian at Fred Gerhardt's Commercial Truck Body Factory in Fresno, CA.

With its very small profile, inboard front suspension and monocoque construction, Fred Gerhardt's first design was a technical success. The car appeared as tiny as the Lotus 29 and 34 but driver Jerry Grant had a much more upright driving position and towered out of the cockpit. Like some of the rear-engined lost causes from 1964, the Agajanian's Troutman-Barnes, Gordon Van Liew's Edmunds-built car, Racing Associates' unnamed #10 car and Yunick's bizarre Hurst Floor Shifter, the Gerhardt did not make the race but Fred Gerhardt clearly had the right idea as he received orders for new cars for the 1965 season. 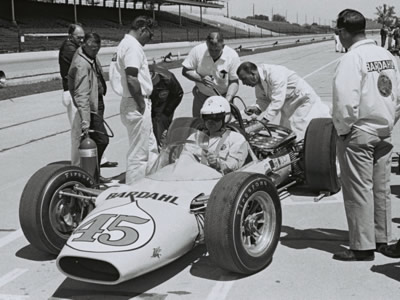 The 1964 Gerhardt in the pit lane during practice for the 1964 Indianapolis 500. Part of the Dave Friedman collection. Licenced by The Henry Ford under Creative Commons licence Attribution-NonCommercial-NoDerivs 2.0 Generic. Original image has been cropped.

The 1964 Gerhardt was entered at the 1964 Indy 500 for Jerry Grant with Bardahl backing but did not qualify. In disgust, Gerhardt put the car up for sale, and sold it immediately to Nick Fulbright (Niles, Michigan). Entered by Fulbright and Harry Lane entered it for Bob Christie at Milwaukee, but he could not qualify, and then he crashed it heavily in practice at Milwaukee in August. Once it was rebuilt, Chuck Rodee drove it at Phoenix in November. Fulbright entered it at Indy in 1965 as the #47 WIFE Radio Good Guy Spl and Bill Cheesbourg qualified it in 33rd position, much to the team's delight. Cheesbourg continued with it at a few more races in 1965, but after qualifying last at IRP in July, it was reported that the car was sold. Subsequent history unknown.