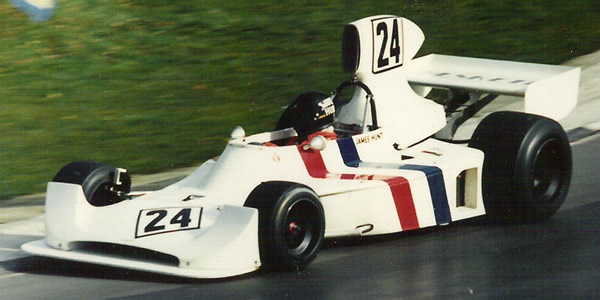 James Hunt giving the Hesketh 308 its debut at the 1974 Race of Champions. Copyright Richard Bunyan 2007. Used with permission.

The Hesketh team built their first F1 car, the Hesketh 308, in 1974. James Hunt was highly competitive in this car, winning the International Trophy in 1974, and the Dutch GP in 1975.

Lord Alexander Hesketh's team had prepared a March 731 for James Hunt to drive in 1973, engineered by Harvey Postlethwaite. The team was run by Anthony 'Bubbles' Horsley and based at Hesketh's stately home, Easton Neston. The whole operation was financed from Lord Hesketh's personal wealth, and its principal aim was to enjoy the experience. Thanks to Postlethwaite, the March 731 had been significantly more competitive than the works Marchs, so the team decided to build their own car for 1974. The 308 was a shallow monocoque, very narrow at the front and then tapering out to the maximum allowed width in the sidepods. This allowed a low full-width nose housing the main radiator, with oil radiators tucked in front of the rear wheels. Suspension was conventional all round, with outboard coil springs; and brakes were outboard at the front, and inboard at the rear.

The car was immediately very quick in tests in Brazil, but a leaking bag tank prevented it from making its debut at the non-championship Brasilia F1 race. Hunt took pole position at the Race of Champions in mid-March, but the car handled badly in the wet and he had to retire. The car was then dreadful in the South African GP, but a week later at Silverstone for the International Trophy, Hunt was on pole by a massive 1.7s! The start went very badly, with the clutch failing and the gear knob coming off in his hand, so Hunt dropped to 14th, but then started the sort of comeback that films are made about. With no clutch, and having to change gear with the stump of the gearlever, he charged back through the field, picking off driver after driver until he was behind Ronnie Peterson's leading Lotus 76. On lap 28, in front of the packed Woodcote Corner grandstand, Hunt ducked down the inside and took the lead. He went on to win by a mile, and Britain had a new F1 hero.

Although this dizzy height would not be repeated in 1974, Hunt took several third place finishes and would have none much better but for poor reliability and his usual generous share of accidents. After one of those accidents, 308/2 was rebuilt with the main radiators moved to the sides, and the oil radiators out at the back. This was formalised as 308B specification for 1975, with the addition of rubber cones replacing the outboard front springs. In this form, the 308Bs took Hunt to three second places in 1975, and finally gained the team's first Grand Prix win at the Dutch GP. One car was sold to Harry Stiller for Alan Jones to drive, and then on to Harald Ertl. When Hesketh ran out of money at the end of 1975, Horsley carried on, forming a team with private 308 owner Harald Ertl. The cars were modified to 308D form with coil springs all round again, and a fourth car was built up for Guy Edwards after 308D/3 was wrecked when Ertl crashed into the side of Niki Lauda's Ferrari at the Nürburgring in 1976. Later in the season 308D/2 was wrecked by Ertl at the Canadian GP, and was repaired using the repaired monocoque from the crash in Germany. Two of the three surviving cars have appeared regularly in historic racing, while the last car slumbers untouched in the Donington Museum.

In 2004, a fourth 308 was advertised on ebay.  This was sold to an owner in Barcelona and was restored between 2014 and 2015 as "308/3".  The provenance of the car is not known, and no link has yet been proven to 308/3, but it is undeniably a real car, which means the histories above need to be methodically reviewed.