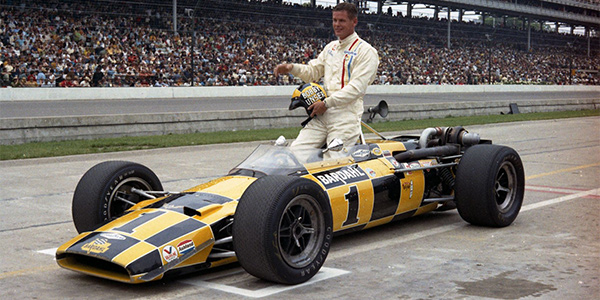 Bob Wilke's Leader Card Indy team, with chief crew Jud Phillips and driver Bobby Unser, had wanted to buy a new Eagle for 1969, but when Dan Gurney announced that he would only build one customer car, for "Smokey" Yunick, Wilke instead did a deal with Roger Penske and Lola importer Carl Haas to order a new Lola, a sister car to the one Penske ordered for driver Mark Donohue. As part of the deal, Penske's chief mechanic Karl Kainhofer would set up a car for Unser to drive, and Phillips would build a turbo Offenhauser engine for the Donohue car. The two new Lolas would employ four-wheel-drive, as the successful 1968 Lola T150s had done, despite USAC having already announced that 4WD would be banned at the end of that 1969 season. The new cars would only have one season to run, but the combination of turbo Offy and 4WD was widely felt to be the best option for the Indy 500. To lessen the 4WD cars' advantage in 1969, USAC also ruled that 4WD cars could only use 10-inch front wheels, instead of the 12-inch wheels allowed on two-wheel-drive cars. Goodyear made tyres for the smaller rim for the Indy 500, but immediately after this race, both Goodyear and Firestone ceased any development of this size, leaving the two T152s effectively unusable for the rest of that season.

Unser qualified in third place for the Indy 500, on the outside of the front row, and one place ahead of Donohue. In the race, Unser suffered handling problems and had to stop a total of five times, replacing the right rear tyre each time, so the 1968 winner did well to bring the Lola home in third place. Rookie Donohue had a very good race until a magneto problem in the closing stages caused him to lose 12 minutes in the pits, leaving him seventh at the finish. Unser drove his car again at Milwaukee a week later, but was eliminated by in an opening lap accident, and went back to using his older two-wheel-drive Eagles for the rest of the season. In November, the Penske T152 was tested at Indianapolis for a week after its conversion to two-wheel-drive for 1970. The tests were not a success, with Donohue only getting up to 165 mph, compared with the the 169 mph he had managed in May, and the 172 mph lap recently set by Al Unser in the Vel's Parnell Jones Lola T150s that crew chief George Bignotti had developed. Even though Bignotti shared with Penske the changes he had made to the Ford-powered T150s, the same changes did not work for the Offenhauser-powered T152, and Penske decided to order a new T153 with Ford power for 1970. 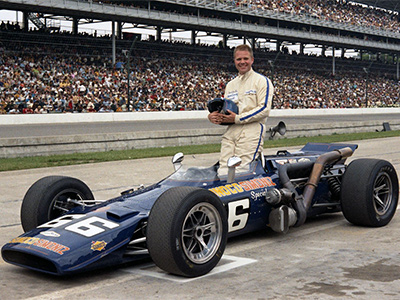 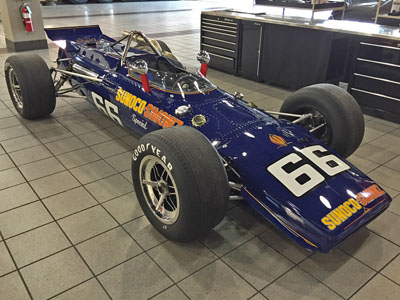 New to Roger Penske for Mark Donohue to drive at the 1969 Indy 500 as the #66 Sunoco entry. The car was in four-wheel drive configuration and built specifically for a turbo Offy. Donohue qualified 4th and finished 7th. For the rest of that USAC season, Donohue only competed in the road races Indianapolis Raceway Park, Brainerd, Seattle and Riverside, driving in each case a Lola-Chevrolet. He is believed to have used the team's older T150, meaning that the T152 was not used again in 1969. In 1970, Penske had a new T153 with turbo Ford engine for the Indy 500 and Ontario, but used a Lola-Chev at IRP, which could have been the T152. The T152 was sold to Leonard Faas at the end of 1971, but he did not use it either. It was been reported that this car went to Don Vesco in 1985, and then to Chuck Haines. By 2003, George Smidt was reported to have this car, and in February 2005, he sold it to Penske Restorations, where it was restored by Bernie King's team. Between 2016 and 2022, the immaculately restored car has been on display in the Indianapolis Motor Speedway Museum and in the Penske Racing Museum in Phoenix, Arizona. In April 2022, it was in the Penske Museum. 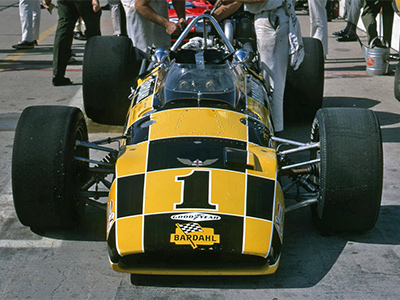 New to Bobby Unser, financed by Bob Wilke of Leader Card and prepared by Jud Phillips in Inglewood, California. The car was in four-wheel drive configuration and fitted with a turbo Offy. Unser qualified third and finished third. At the next race, at Milwaukee, Unser was involved in a massive opening lap accident, but it is unclear how heavily damaged the Lola was. Thereafter, Unser used his two older Eagles, and the Lola was not seen again. In early 1970, it was reported that the newly-independent team of Clint Brawner and Jim McGee had acquired the ex-Bobby Unser Lola, but no Lola appeared with that team during 1970 and as Brawner's team ran Ford-powered cars in 1970, it's hard to see why a Offenhauser-powered car with a banned 4WD system would have been of interest. It seems more likely that the car ended its life in the Milwaukee pile-up.

The other factor that limited the further use of the T152 was that the chassis had been built specifically for the smaller 4-cylinder Offenhauser engine, so could not be fitted with either Ford's turbo quad cam V8 engine, or the stock block Chevrolet V8 engine that Penske and Donohue favoured for road courses. The tight packaging of the Offy had allowed more room in the monocoque for fuel, bringing the capacity of the T152 up to the maximum allowed 75 gallons, instead of the 50 gallons that could be fitted into Penske's older Chevrolet-engined T150.

The most obvious differences when trying to distinguish between the T152 and its predecessor, the T150, in photographs is that the T150 has just one fuel port on either side of the nose, whereas the T152 has two. The T150 also has a large circular access panel on the side of the car, while that on the T152 is oval. The width of the tub is also different, thanks to the more compact Offenhauser engine in the T152, which results in the rollhoop of the T150 ending outside the cockpit, while that on the T152 ends inside. The 1970 T153, which went back to the Ford engines used in the T150, also has a rollhoop ending outside the cockpit like a T150, but shares the T152's oval access panel on the side.

The research on the Lola T150, T152 and T153 models has been a collaborative effort involving Allen Brown, Michael Ferner, Simmo Iskül, Luis Mateus and another colleague who prefers not to be credited. Thanks also to Gerald Swan at Lola Heritage.

There is much still to be learnt about the lives of the two Lola T152s after their remarkably brief racing careers. Did the Leader Card car survive? What happened to the Penske car after that test in November 1969? Please contact Allen Brown (allen@oldracingcars.com) if you can add anything to our understanding of these cars.