This page aims to demonstrate the history of this car, using all the available evidence. Some information has been redacted as it would be possible for it to be used to authenticate a rival car. The redacted items are:

This page is still in draft, and there are several more things that would help, such as more information from Gerre Payvis on how his four Lolas were used, or photographs from Mike Korn, allowing comparison with modern photographs from the same angle. Efforts continue to find more information, but a great deal of information about the car is already available. Please contact Allen Brown at allen@oldracingcars.com if you can add anything, or is you believe anything here is inaccurate or expressed in a biased way.

According to Lola's invoice summary, this car was originally invoiced to Sid Taylor. Taylor was running Jody Scheckter's F5000 team in the US series in 1973.

The Lola invoice, of which this is a copy, shows that the car was immediately shipped to Taylor at Chicago's O'Hare airport: 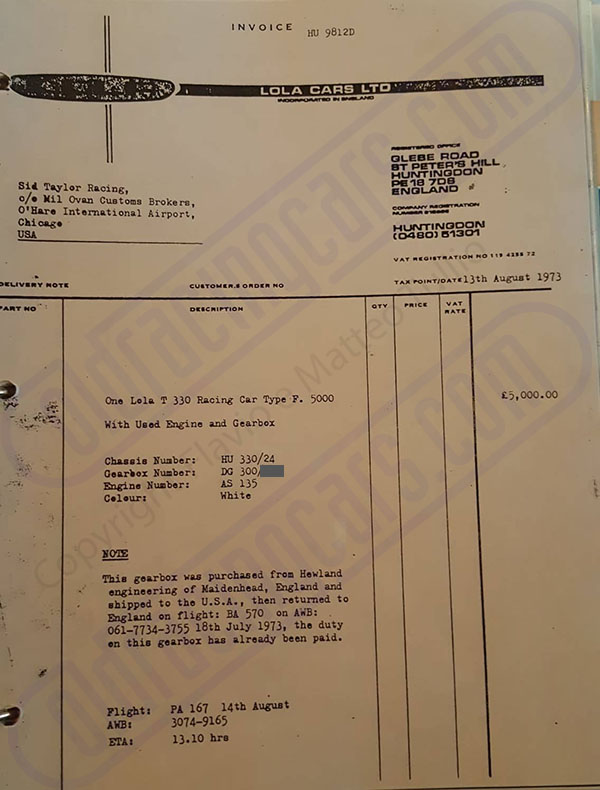 Autosport's report on the 19 August Road Atlanta F5000 race takes up the story. 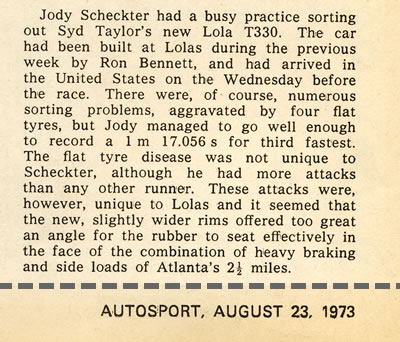 The Log Book is dated 18 August, the day before the race, and presumably the date of technical inspection. The number on the log book is not revealed here, so that information cannot be misused, but it is of the form "03-1xx", where "03" is the SCCA region number for Atlanta Region, whose tech crew would have been running this event, and the "1xx" is a three-digit number.

The Log Book lists the "Manufacturer's Identification No." as "# 24", a reference to the car's chassis number. 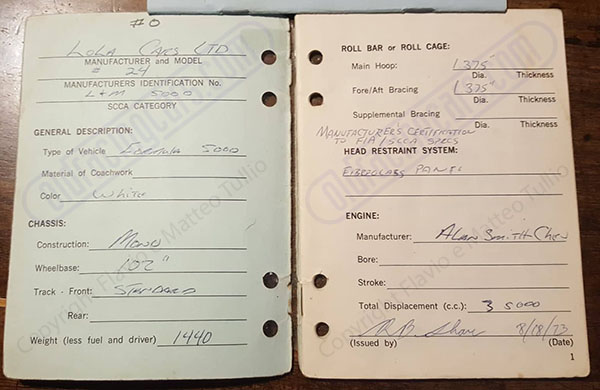 Autosport reports that Scheckter drove this car in his Heat at Road Atlanta, but Taylor decided to put him in the Trojan T101 for the final. Then Scheckter races the Lola at Pocono on 3 September, but the team focused on the Trojan for the final race of the season.

The car was next seen in 1974, when Nestor Garcia-Vega drove what Autosport described as "the ex-Scheckter Lola T330". The car was run for Garcia-Vega by Jerry Entin, Sid Taylor's partner on the 1973 Scheckter season, so the car had not changed hands at this point.

Records show that Garcia-Vega drove the car at three events: the California Grand Prix at Ontario on 1 Sep 1974, the Monterey Grand Prix at Laguna Seca on 13 October 1974, and the Riverside Grand Prix on 27 Oct 1974. All three races are shown in the same SCCA Log Book.

According to the SCCA Log Book, the car was acquired by Dr John Korn on 4 November 1974.

Just two weeks after Garcia-Vega drove the Lola the Riverside Grand Prix on 27 Oct 1974, the California Sports Car Club (the southern California Region of the SCCA, based in Los Angeles, known as CSCC or simply "Cal Club") held a SCCA Regional at Riverside. According to the club's own newsletter "Finish Line", Dr Korn raced the "ex-Scheckter ex-Garcia Viega Lola T-330". 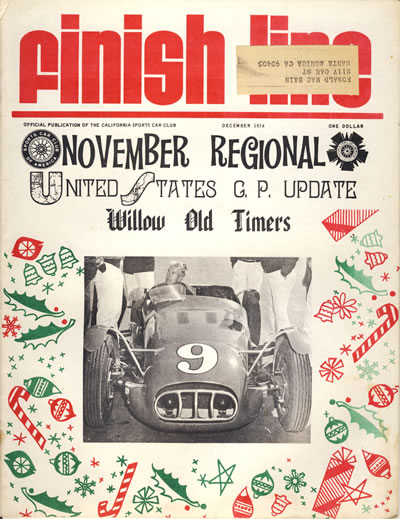 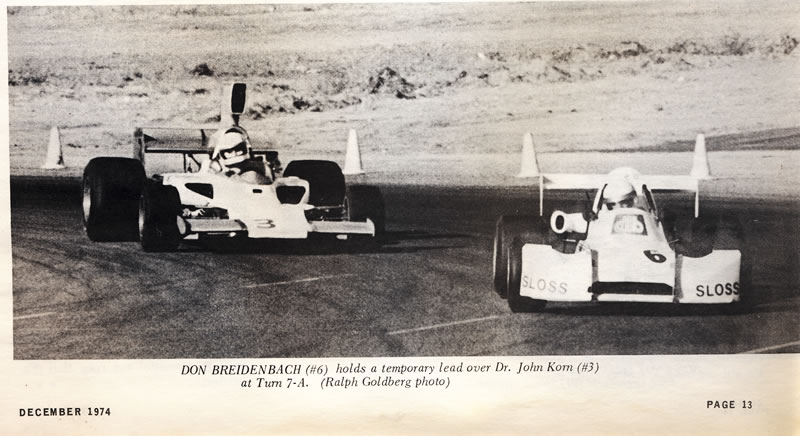 Dr Korn's subsequent races are all shown in the same SCCA Log Book. 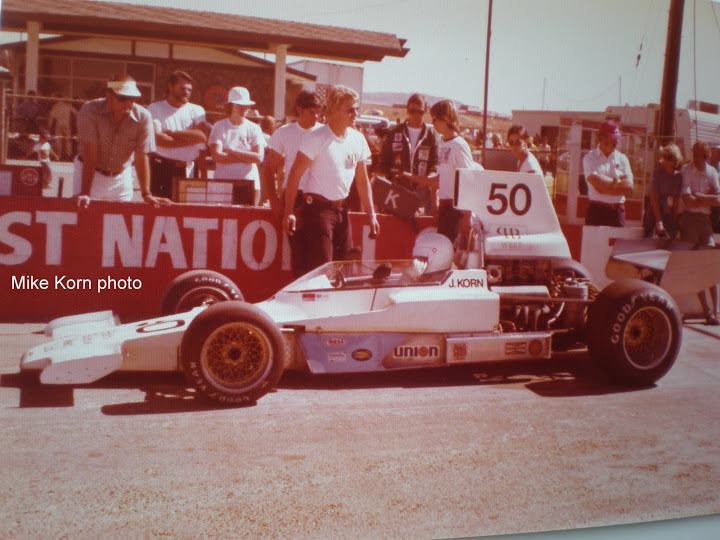 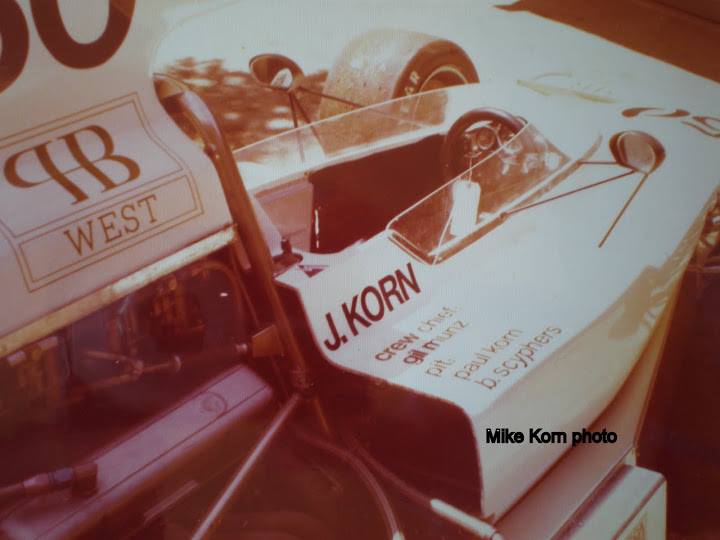 On 23 April 1976, the car was sold to Doug Correa (Newport Beach). The change of ownership is shown in the SCCA Log Book: 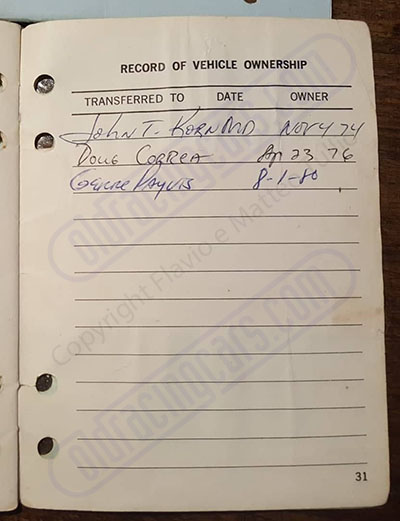 In an email to the author on 25 October 2005, he recalled buying the car from Dr John Korn, but could not remember who he sold it to.

According to the SCCA Log Book, the car was bought by Gerre Payvis on 1 August 1980. Payvis was based in Peoria, a northern suburb of Phoenix, Arizona. No races by Payvis are shown in the original SCCA Atlanta Region Log Book, which end with Correa's 16 June 1979 race.

In January 2019, after the first version of this page was published, Gerre Payvis commented on Facebook: "I bought Lola 330- 24 from Doug Correa, no ID tag present. It was in F 5000 body work. It was painted black, but was used and easy to see it was white before black. The car was equipped w/ webber carbs. The steering rack was id as 024."

The dificulty with Gerre Payvis's period of ownership is that he had more than one Lola. As he commented on Facebook in May 2012, "We had 4 Lola's and they were all converted to CanAm". From the pictures Gerre has posted, the one with a centre bodywork section closest in livery to the one on this car when Mark Bailey acquired it is this one: 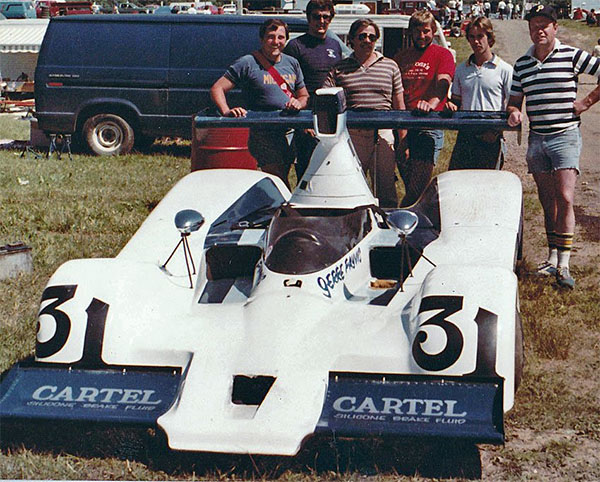 Note that despite the similarity in livery, the car above has an air intake in the nose, a feature introduced by Lola with its 1978 Can-Am bodywork kit, and is almost certainly Payvis's Lola T332 HU53 that he acquired from Charlie Kemp for the 1980 season. His older T330 HU24 appears to have been retained as a backup car to HU53, so is likely to have had very similar livery.

The two pictures below show two of Payvis's cars at Road America in July 1983: 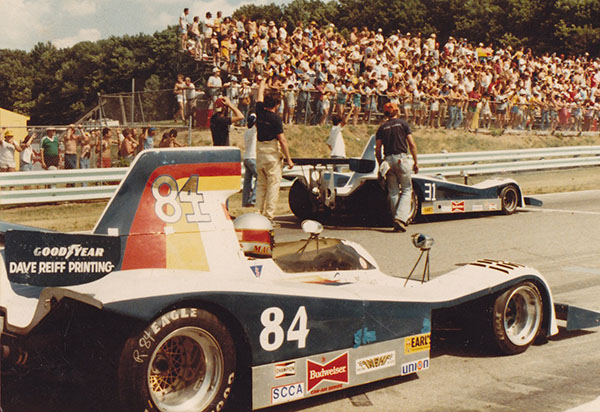 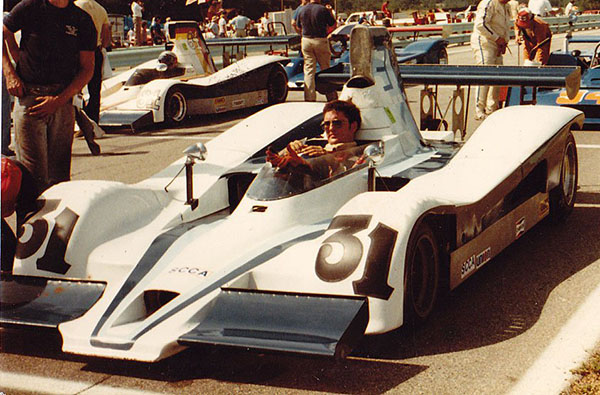 The bodywork on the #31 car being driven by Payvis more closely resembles that of the car later owned by Mark Bailey. Again, this car is believed to be T332 HU53.

The Bill of Sale between Payvis and the next owner Mark Bailey is missing, but among the documents acquired by Flavio Tullio with the car is this document dated 30 July 1990, which is during the period that later owner Rick McLean was researching the car's history: 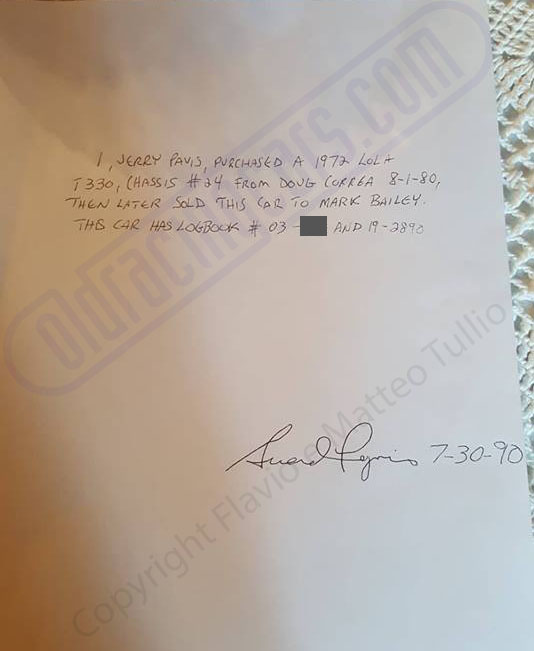 There are a number of problems with this document, the most obvious being that Gerre Payvis's name is spelt as "Jerry Pavis", yet the signature has a descender consistent with a 'y'. The first letter of the signature is a cursive 'G' (cursive being the writing style taught in New Jersey schools in the 1960s), so the signature disagrees with the text. Could this be a document written by Rick McLean for Payvis to sign, and Payvis did not bother to change the spelling? This is a very unsatisfactory document, and no weight can be placed on it for the car's provenance. However, Bailey was very clear that he bought the car from Payvis, and it can be seen to have Payvis's name on the bodywork in Bailey's pictures.

In January 2019, after this page was first published, Payvis commented on Facebook, "Looking at the doc's here the bill of sale, from rick mclean is fake. I never use jerry as Gerre and would not misspell my last name. I believe the car Tullio has is the Lola 330 24 I sold Mark Bailey. My signature is correct but had sold Mclean parts, so he had access to it. I see a Lola 330 down under for sale, as ex Jody Scheckter car, this is a re production not 330 24. Do you know of any dg 300 for sale, beside Chuck Haines? Good at you G.P.".

Flavio Tullio also has a note saying "March 8 1986 Payvis sold to Mark Bailey", but this date appears too late. In correspondence with the author in 2018, Bailey was confident that the purchase was much earlier, based on the time he spent rebuilding it, the Chevrolet El Camino tow car he used for the "tow from hell" back from Phoenix, and the fact that he was dating his future wife at the time. He recalls that the El Camino was stolen from outside his house the day after Christmas 1980, so if he's got these things right, he must have bought it in the last four months of 1980. In that case, Payvis can only have owned it for a very short time.

In an earlier email to OldRacingCars.com in October 2016, Bailey had confirmed the purchase from Payvis and the subsequent sale to Rick McLean. 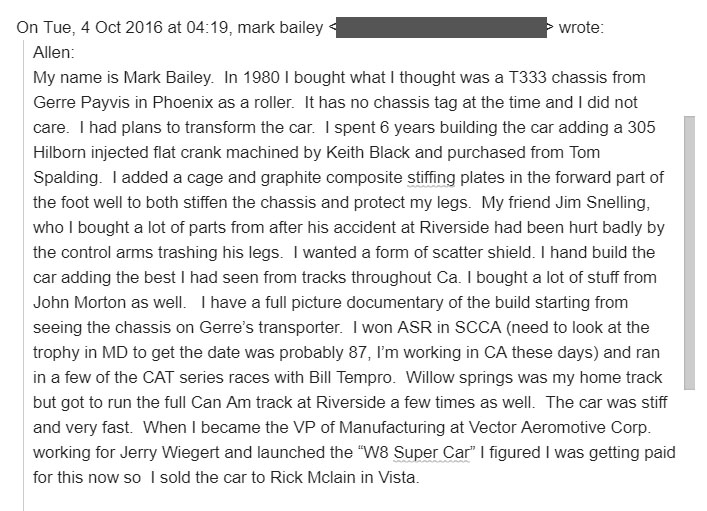 It is noteworthy that the car had lost its chassis plate by the time Bailey acquired it.

In 2018, Bailey supplied the following images of his rebuild of the car. His photo caption is shown in each case: 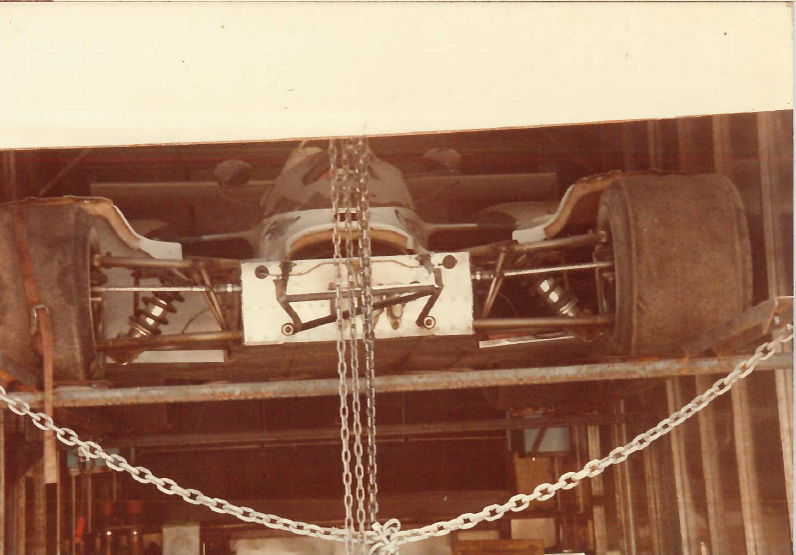 Fig 1/1980s: "The rolling chassis as I first saw it In Phoenix at Payvis’s shop.  Back Up car in his transporter – very rough" 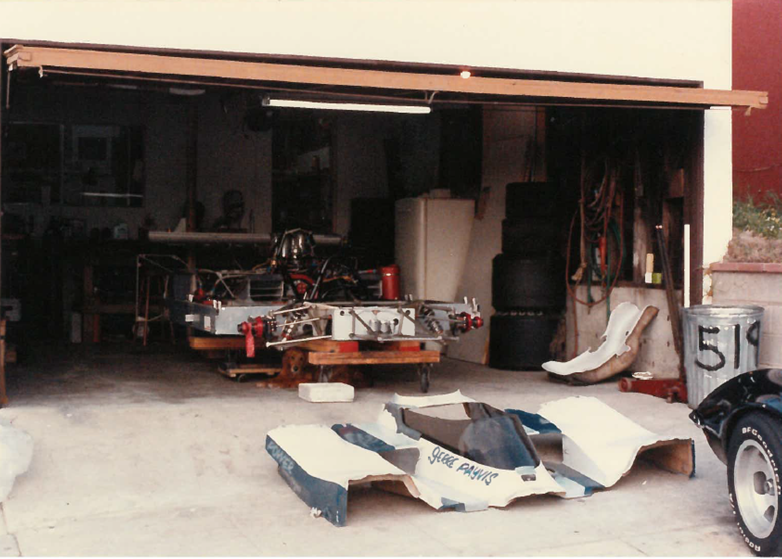 Fig 2/1980s: my shop during final Assembly after everything I build was plated or anodized 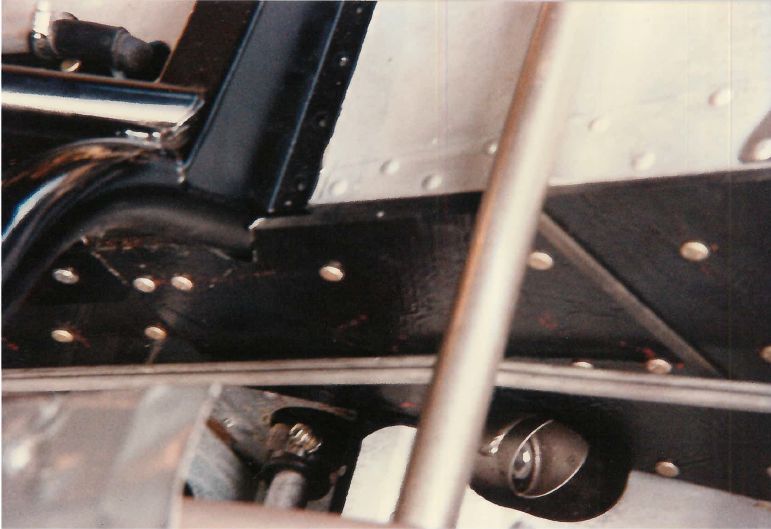 Fig 3/1980s: .250 graphite plates in the front foot well bolted in with Hi-loc fasteners worked as a scatter shield to protect my legs. (Compare with Fig 3/2018) 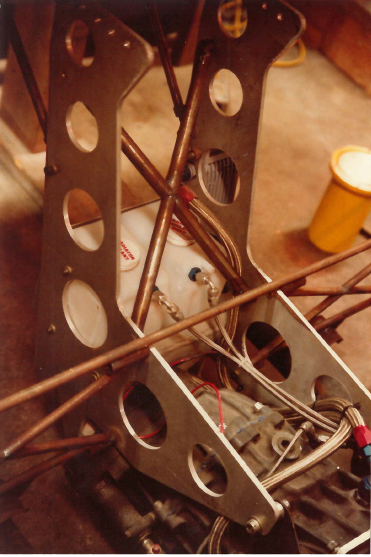 Fig 4/1980s: I designed and hand fabricated the whole rear wing and body attach system. Can be rotated up without disassembly to change gears. (Compare with Fig 4/2018) 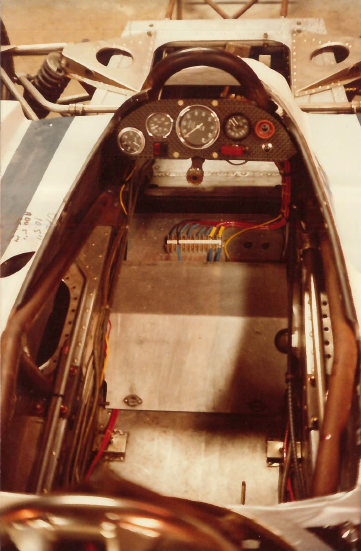 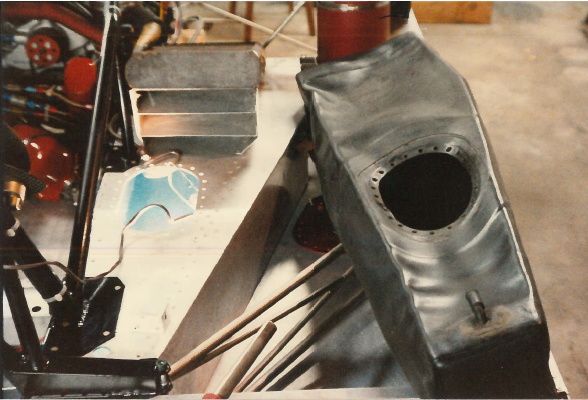 Fig 6/1980s: I coated the inside of the fuel cell pods with rubber coating to protect the bladder. (Compare deformable structures and radiator fittings with Fig 6/2018) 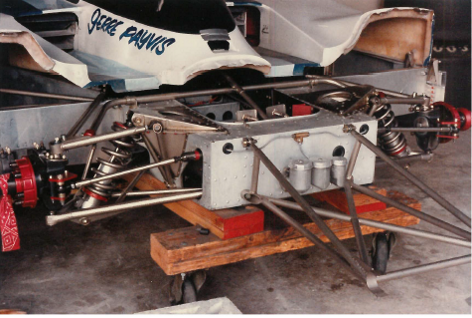 Fig 7/1980s: I used the chassis as a jig for all my fabrication.  I designed and fabricated all the steel hangers, upper control arm supports, front hanger.  Payvis’s name is still on the body work at this point. (Compare with Fig 7/2018) 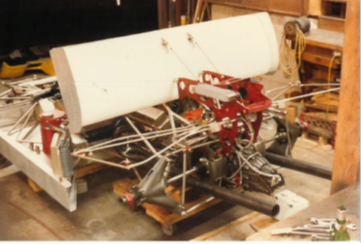