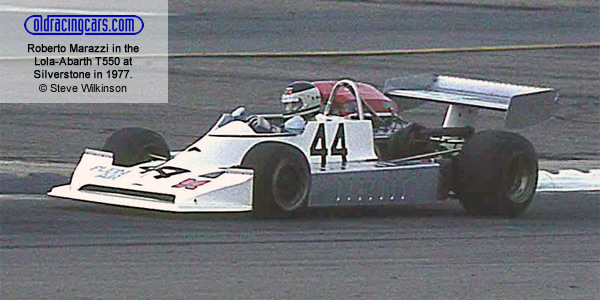 Roberto Marazzi in the Lola-Abarth T550 at Silverstone in 1977. Copyright Steve Wilkinson 2019. Used with permission.

Like the 1976 F2 and F/Atlantic cars on which it was based, the Lola T560 was a "three-quarter" monocoque fabricated with NS4 aluminium alloy sheet, and using a tubular steel sub-frame around the engine. Suspension was very conventional, with double wishbones at the front, and a lower wishbone, single upper link, and twin radius rods at the rear. Springs and dampers were outboard all round. Brakes were outboard at the front, and inboard at the rear. Transmission was via a Hewland FT200 as usual. A single fuel cell (14 Imperial gallons/16½ US gallons/63 litres) was used to SCCA standards, and the main radiator was in the nose. The weight was given as 970 lbs (441 kg), the same as the T460. The dimensions were also the same as the T460 except the track, which had increased from 48 to 53 in at the front and from 52 to 53 in at the rear.

The Lola T460 had sold well in 1976, so the failure of the T560 in 1977 was unexpected. Changes from the T460 were minor, and an update kit was issued that allowed some of Lola's US customers to upgrade their T460s to T560 specification without investing in a whole new car. The prototype T560 was sold to Jerry Hansen, but the second monocoque was used for a Formula 2 project, temporarily using the identity T550 HU1. Holbay's Abarth F2 engine proved no more reliable than it had been during its brief appearances in 1976, and the car only appeared at one race. After testing in December 1977 suggested Holbay may finally have solved the Abarth's problems, there was a suggestion of Alo Lawler running it in 1978, but this again came to nothing. The T550 became T560 HU2, and was sold to David Render, who borrowed the Abarth engine from Holbay and used the car in sprints for several years. 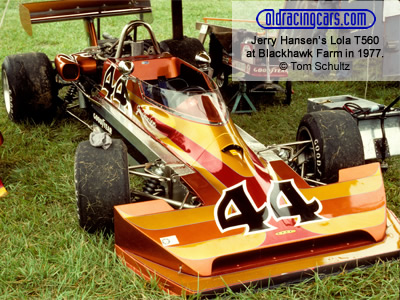 New to Jerry Hansen (Long Lake, MN), and logbooked with the SCCA on 17 August 1977. Then to Bruce Clark (Wayzata, MN) 1 May 1978, and raced in SCCA Nationals and occasional nearby Pro races over the next few seasons. He stopped racing after an accident in practice at the Road America Pro race in July 1981. He retained the T560 until 1989, then he sold it to Richard George. It then went to Denis Tobin in 1990, to Michael Henderson in Australia in 1995, then to Colin Haste (Port Macquarie, NSW, Australia) in 2000. Used in historic racing until an accident at Sandown in Australia 2002 left the car very badly damaged. The car was repaired and racing again by 2010, and raced regularly in Australian historic racing thereafter. Raced at Historic Sandown in October 2019. 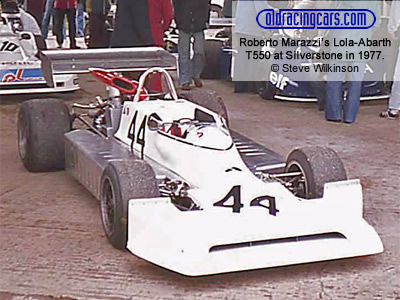 First seen as a Lola T550 with Holbay Abarth engine for Roberto Marazzi at the Silverstone F2 race in March 1977, but did not start. Not raced in 1977, but tested by Bruce Allison and Bob Evans in December. Alo Lawler was due to run the car in 1978, but abandoned the project after persistent engine problems. Sold to David Render for sprints in 1979, still with the Abarth engine borrowed from Holbay, and used until 1982 when the Abarth was returned, the Lola fitted with a 2.8-litre Hart engine, and used in this form until 1985. Sold to Jonathan Toulmin for 1988, who continued to run it with the Hart engine, then to Alan Newton, who bought the Abarth motor from Holbay and refitted it. Sold to Colin Pool in 1996, who sold it on to Francesco Molino. Sold by Molino to Thomas Steinke (Hamburg, Germany) in 2012, but later sold back to Molino. Still owned by Molino in December 2019.

Thanks to Gerald Swan, whose Lola Heritage website is a fabulous source of information on the Lola T550, Lola T560 and other models. Thanks also to owners and former owners Colin Haste, Colin Pool, and Thomas Steinke, to researchers Steve Wilkinson, Chris Townsend, Derek Harling, Bryan Miller, Alan Brown and Dan Rear, and to Tom Schultz and Steve Wilkinson for the use of their photographs.