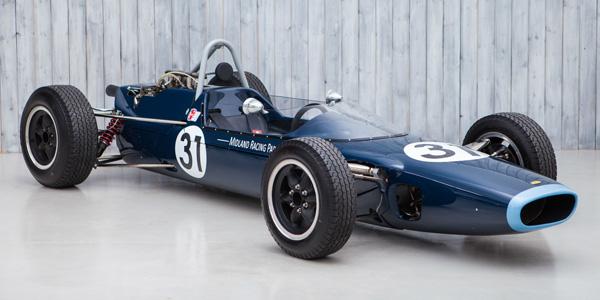 For the 1965 season, Lola built an all-new monocoque Lola Type 60 Formula 2 design for their principal customer Midland Racing Partnership. As Lola's first monocoque, the car followed the outline of the successful Lotus 25 and 33 designs.

As most of Eric Broadley's attention was on the Lola Type 70 sports car, the job of designing the Lola T60 fell to 25-year-old Tony Southgate, who had just rejoined Lola after a spell at Brabham working for Ron Tauranac. The full-length bathtub monocoque was made from folded and spot welded sheet steel, stronger than Lotus’s aluminium-skinned and rivetted Formula 1 monocoques, but also heavier. However, the relatively high minimum weight limit specified for the new Formula 2 meant there was no need for aluminium, and Lotus also used steel for the Formula 2 Lotus 32. Southgate designed rocker-arm front suspension, again following the Lotus template, and at the rear it used a reversed bottom wishbone, single top link, and twin radius arms. A Hewland gearbox was fitted, and the cars used either Cosworth's SCA Formula 2 engine or BRM's new P80 engine which was being made available to selected teams.

Two cars were built for Midland Racing Partnership (MRP) at the start of the 1965 season, with chassis SL60/1 being raced by Richard Attwood and SL60/2 by Tony Maggs. After the first couple of races, SL60/2 was fitted with a BRM F2 engine, and was raced in this form by Maggs, Frank Gardner and others before being returned to Cosworth SCA power. A third car, SL60/3, was produced in time for John Surtees to race for MRP at Brands Hatch at the end of August 1965, and a customer car was produced for Eric Offenstadt. A fifth T60 was built in early 1966 as a Formula 3 car for Frank Lythgoe Racing and his driver Mike Beckwith.

MRP started the 1966 season with chassis SL60/3 having been upgraded to T61 specification as SL61/6 for Attwood, while Gardner drove Attwood's old T60/2. The old prototype SL60/1 was brought out briefly for Gardner to drive at Albi after David Hobbs had "tweaked" Gardner's usual car the previous weekend. MRP were unable to get new cars for 1967, as Lola's focus was on their partnership with BMW in F2 with the T100, and building T70 Mk 3s for Group 6. The partnership was dissolved in March 1967 and the cars sold.

New to the Midland Racing Partnership (MRP) for F2 in 1965 and driven mainly by Richard Attwood. It was not seen in the early part of 1966, but was brought back into the team for Frank Gardner to race at Albi after David Hobbs' creased SL60/2 at the Le Mans race. It was then entered by David Baker Racing for Harry Stiller to drive in the Motor Show 200 F2 race at Brands Hatch in October 1966. Unknown in 1967, but believed to be the Lola T60 raced by Chris Featherstone (Maidstone, Kent) in Monoposto from 1968 until an accident at Mallory Park in October 1970. Featherstone then bought SL60/5 to replace it, and according to Peter Denty, SL60/1 was retained for spares. The remains of the car were owned by Denty by 2004, so presumably accompanied SL60/1 from Featherstone to Vic Nutter to John Fenning to Denty.. Still with Denty in unrestored condition in September 2019.

Tom Tweedie in the Lola T60 at Eastern Creek in 2006. Copyright Rob Tweedie 2007. Used with permission.

New to the Midland Racing Partnership (MRP) for F2 in 1965 and driven at first by Tony Maggs, then by Frank Gardner and others. Raced mainly by Gardner in 1966, so probably the "ex-Gardner" car advertised by MRP in April 1967. Bought less engine and gearbox from David Baker at MRP by Brian Nelson (probably in October 1967) for Irish 1600cc class racing in 1968 and 1969 using a Ford twin cam. Sold to D&A Shells (Stratford, London) late 1969, and advertised less engine and gearbox in February 1970. History then unknown, but New Zealand historian David McKinney reports that Keith Laney bought a T60 in the UK and raced it in minor events in New Zealand around 1972. This would be the "Lola Kiwi 2" that the Formula One Register record Laney driving in Monoposto Formula in 1971. Laney sold the Lola to fellow Kiwi Harry Holt in 1976, and he took it to Australia where it was sold to Matt Carroll in 1978. Then to Don Black (Galston, NSW) 1989, and raced until sold to Robert Tweedie (Sydney, NSW) in 2000. Sold to Roger Fowler in the UK in May 2013. Fowler, a former MRP mechanic, fully rebuilt the car and ran it for the first time at Castle Combe in April 2016. He raced it at the Chateau Impney hillclimb in 2016, and in HSCC Classic Racing Cars in 2017, 2018 and 2019. Still owned by Fowler in November 2020.

New to the Midland Racing Partnership (MRP) for F2 in August 1965 and raced by John Surtees and Frank Gardner. This car was rebuilt by Lola at the end of the season and renumbered SL61/6 for 1966. 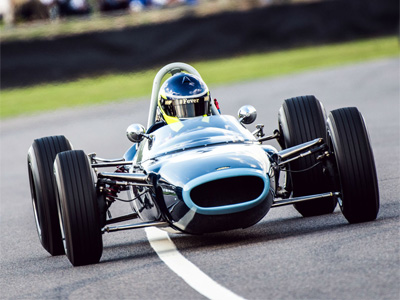 New to Eric Offenstadt, originally planned as a F2 car with BRM engine. Its first race was in F3 specification later in 1965, but it was raced in F2 with BRM power in 1966. Bought by Robs Lamplough (London) in 1967 and sold on to Brian Cullen for Irish 1600cc class racing in 1968 and 1969. Then sold to the US, where it was advertised by Sport Car Service (Vandalla, Ohio) in May 1970. Likely to be the T60 advertised by R.H. Kulaas (Fairborn, Ohio) five months later. Bought by Gerry Hudson (Galva, Kansas) in 1970 and raced in SCCA Formula B and then Formula C over the next few years. Retained by Hudson until 2014 when it was sold to Rob Shanahan (San Diego, CA), who fully rebuilt the car. It made its historic racing debut at the 2018 Goodwood Revival, raced by Ben Mitchell. Ben raced it again at the Goodwood Revival in 2019. Sold in September 2019 to Gareth Williams (Weybridge, Surrey). Still owned by Gareth in February 2021.

New to Frank Lythgoe for F3 in 1966, and raced for him by Mike Beckwith. Sold in June 1966 to Steve Thompson (Sutton Coldfield, Warwickshire), and raced in F3 and libre in 1966 and 1967. Then fitted with a 1.6-litre Ford twin-cam, and hugely successful in libre racing in 1968 and 1969. Also appeared in the F2 class at 1969 F5000 races. Retained briefly for 1970, until Thompson's new Chevron B17c was ready, and then sold to Chris Featherstone (Maidstone, Kent) to replace his original T60 after it was wrecked at Mallory Park in October 1970. Fitted with a 1500cc pushrod Ford engine, and raced by Featherstone in Monoposto in 1971 and 1972. For 1973, the car went to Vic Nutter (Billingshurst, West Sussex), by which time it had Ensign bodywork and a Hewland Mk 7 six-speed gearbox, and was raced by him in Monoposto a few times each year in 1973, 1974 and 1975. Nutter then returned to Kenya, and the Lola remained in storage in England until 1981 or 1982, when it was sold to John Fenning who restored it to original F2 specification. Later sold by Fenning to Peter Denty (Thetford, Norfolk) some time before 2003. Still with Denty in September 2019.

New to the MRP team for 1966, this car was primarily raced by Richard Attwood, but also raced once each by David Hobbs and Alan Rees. It then went to Ian Ashley for F3 in 1967, but he rarely appeared in the car. It then appears to have been exported to the US, and is thought to be the "Lola T63" bought from Fred Opert by Victor Franzese (Watkins Glen, NY), and raced in SCCA Northeast Division Formula B in 1968 and 1969. Advertised by Glen Racing Ltd (Montour Falls, NY) in February 1970 as "Lola T-63 Formula B. Excellent condition, Ex-Surtees - Attwood". The ex-Surtees attribution would make sense if this car had previously been chassis 60/3. Vic recalls that he sold it to Bob Tinker (Itahca, NY), and that he sold it to someone in Florida. Subsequent history unknown, but believed to be the car acquired from William E Anderson Jnr (Boca Raton, FL) by William Schlossnagel (El Cajon, CA) c1983, and then sold to Rob Shanahan (San Diego, CA) c1993. To Robs Lamplough (London) 2012.

Later in 1966 a batch of further updated Lola T62s were built, one of which was used in Formula 2 by Surtees, two more were sold to Italy for F3, and the other three were acquired by wheeler-dealers Robs Lamplough and Frank Williams.

I am most grateful to Rob Shanahan, Chris Townsend and the late David McKinney for their ground-breaking work on these cars; to Duncan Rabagliati and Richard Page at the Formula One Register, not only for their 1960s records, but also their outstanding book 'Monoposto Formula 1958 to 1976', and for kindly sharing their records of current historic racing; to owners and former owners Robs Lamplough, Roger Hurst, Rob Tweedie, Vic Franzese, Vic Nutter and James Denty for their assistance, and to Bryan Miller, Gerald Swan of Lola Heritage, Simon Hadfield and Alan Brown for additional information.