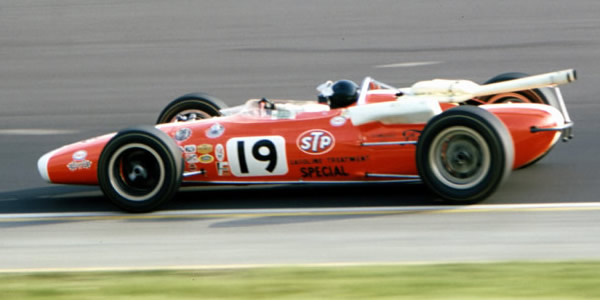 A total of eight 38s were built and, due the failure of the 1966 Lotus 42, Team Lotus continued to use them until 1967. Two cars were consumed after accidents into the creation of AJ Foyt's Coyotes, two are currently on public display in US museums, one is with Chuck Haines, one is owned by Robert G. Hunt and one by Brad Jaeger.

It is interesting to note that well-known motor racing magpie Chuck Haines has owned four of the Lotus 38s: chassis 38/4, 38/5, 38/7 and most recently 38/8. Much thanks to Frank Eggers for his photographs of his and Middleton Caruthers' 38s, and to Ron Nelson for his 1966 picture shown here.

Please e-mail Allen at allen@oldracingcars.com if you can add anything. 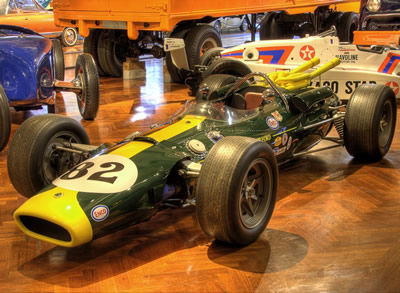 Built 1965 (first chassis built) for Team Lotus. For Jim Clark at the 1965 Indy 500 (#82 qualified 2nd and won race). Retained by Ford. Used as a promotions car until 1977 and then to the Henry Ford Museum (Greenfield Village, Detroit, MI). Brought to England in 2009 for Goodwood and then fully restored by Classic Team Lotus in 2010. Still in the Henry Ford Museum in July 2014. On display at the Indianapolis Motor Speedway Museum in May 2015. On display at the Historic Indycar Exhibition in May 2016.

Built 1965 (third chassis built) for Team Lotus. Crashed by Roger McCluskey while testing at Trenton April 1965 and rebuilt on new tub (fourth chassis built) in time for Indy 500. For Bobby Johns at the 1965 Indy 500 (#83 qualified 22nd, finished 7th). Purchased by Ford and used as a show car standing in as 'Indy winner' show car. Sold at some point to AJ Foyt and believed to be the car that was modified by Eddie Kuzma and entered at the 1966 Indy 500 as the Lotus-Kuzma. For George Snider at the 1966 Indy 500 (#82 qualified 3rd, crashed in race). Parts of this car and of Foyt's car damaged in the same race used to built a new car for 1967. This is believed to be the #82 car destroyed in Bob Christie's accident during Indy qualifying in 1967. 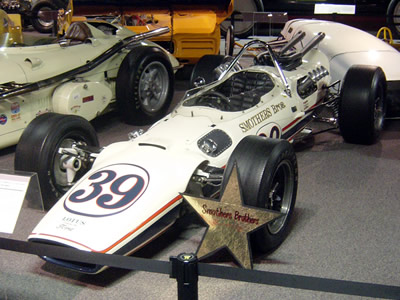 Built 1965 (second chassis built) for AAR. For Dan Gurney at the 1965 Indy 500 (#17 qualified 3rd, retired after 42 laps); for Roger McCluskey at Milwaukee, Langhorne and Trenton; for Gurney at two Milwaukee races; and for McCluskey at Trenton. Raced for AAR in 1966 by Joe Leonard at Phoenix, then an unused spare at the 500, and then driven by Lloyd Ruby, crewed by Dave Laycock, later in the season. Ruby and Laycock then joined Gene White's new team for 1967, and the Lotus was sold to Gordon van Liew and entered by Vita Fresh Orange Juice for Larry Dickson that year. Some modifications were performed by Eddie Kuzma. Also driven in three late-season races by George Snider, Arnie Knepper and Ronnie Bucknum. According to Doug Nye, this car was later sold to Ansted/Foyt then to Dick Smothers and on loan to the Briggs Cunningham Automotive Museum (then at 250 East Baker, Costa Mesa, CA). The museum closed at the end of 1986 and the whole collection was sold to Miles Collier, owner of the Collier Automotive Museum (Naples, FL) but the Lotus 38, as it was not owned by the collection, instead passed to Harrah's Auto Collection. This collection was founded by Bill Harrah, founder of Harrah's Casinos, but after Harrah died in 1978 the collection was acquired by the Holiday Corporation and some cars were sold off. The remaining 200 cars from the collection were donated to the National Automobile Museum (Reno, NV) which opened in 1989 and the Lotus, although reportedly still a separate property, moved with them. The car was still resident in the museum in April 2008 and the National Automobile Museum website in 2009 continued to list a "1965 Lotus-Ford 38 Indianapolis Race Car (Smothers Brothers)" in its collection. Still on display in October 2015 when it was still in the same white #39 Smothers Bros livery. Still in the museum in September 2015, when it had been relegated to a corridor. 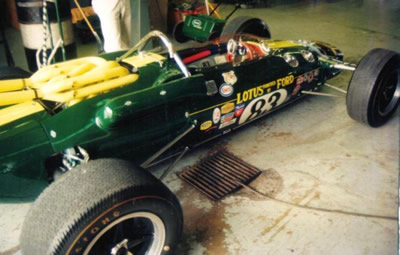 Lotus 38/4 at Walter Goodwin's workshop in 2000 prior to being shipped out for the Goodwood Festival of Speed. Copyright Brian Brown 2009. Used with permission. 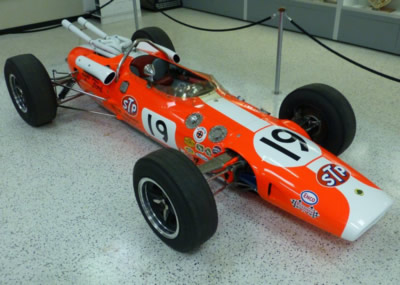 Built 1965 (fifth chassis built) from spares with symmetrical suspension and using some parts from the original 38/2. Used by Jim Clark at St Ursanne and Ollon-Villars 1965. For Jim Clark at the 1966 Indy 500 (#19 qualified 2nd, finished second). Sold to AJ Foyt and wrecked in practice at Milwaukee a week later when the suspension on the straight and the car hit the wall and burst into flames. Returned to Lotus in England and rebuilt; returned to Foyt August 1966 but no further results known in 1966. Likely to have been the #84 Lotus 38 used by Foyt in the opening races of 1967 at Phoenix and Trenton. Then used by Gary Congdon at the Indy 500 when he was bumped. With the other Foyt 38s wrecked, this last survivor was the car Foyt raced at Langhorne in July. Several years later, a ‘Coyote’ was raced in F5000 by Crockey Peterson, but photographs show that it was a Lotus 38, and it has been identified as 38/4. Later sold to Chuck Haines (St Louis, MO) and then to collector James L. Jaeger (Cincinnati, OH). Run at the Goodwood Festival of Speed in 1997, 1998 and 2000. On display in the Speedway Museum March 2009. Ran again at Goodwood 2011. On display again at the Indianapolis Motor Speedway Museum in May 2015, where the history board said it was still owned by Jaeger. Appeared at the Historic Indycar Exhibition in May 2016, when the owner was shown as Brad Jaeger. 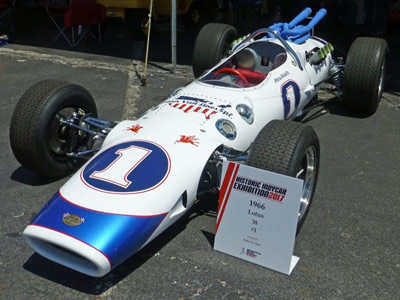 The immaculately restored ex-Mario Andretti Lotus 38 at the Historic Indycar Exhibition in May 2017. Copyright Ian Blackwell 2017. Used with permission.

Built 1966 by Abbey Panels for Dean Van Lines. For Mario Andretti at the 1966 Indy 500 (#64 practiced but not raced). To Gene White 1967: for Lloyd Ruby to drive at Langhorne 19 Jun 1967 (won) but Ruby used the Mongoose elsewhere in 1967. The Lotus was Ruby's backup car, usually numbered #95, but was raced here because Ruby's regular car was at Mosport for the rain-delayed race. This car then went to Paul Wells who, judging by the modification to the car, used it in minor F5000 events but no results have been found. It was bought by Chuck Haines (St Louis, MO) who sold it on to the Houston, Texas partnership of Steve Forristall and John Mecom. Doug Nye reports that it then went to the same anonymous US owner that owns 38/3. In 2008, Chuck Haines reacquired 38/5 and started restoring it. Restored by Walter Goodwin between 2016 and 2017, and on display at the Historic Indycar Exhibition in May 2017, by which time it had been acquired by Robert G. Hunt.

Built 1966 by Abbey Panels for AJ Foyt. For Foyt at the 1966 Indy 500. It was originally his #45 backup car during qualifying but after his #2 Coyote was wrecked, he brought out the Lotus 38 qualified 18th. The Lotus was repainted and renumbered #2 for the race but was involved in the start-line accident and wrecked. It is believed that the car was written off and its surviving components consumed in the Coyotes being built. 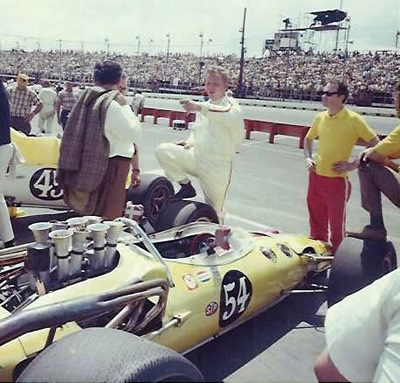 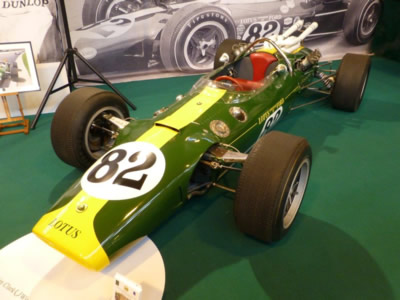 The Lotus 38 on the Classic Team Lotus stand at the NEC in January 2015. Copyright Ian Blackwell 2015. Used with permission.

Built 1966 by Abbey Panels for Team Lotus. For Al Unser at the 1966 Indy 500 (#18 qualified 23rd, crashed in race). Rebuilt on new chassis and retained for 1967. For Jim Clark at the 1967 Indy 500 (#31 qualified 16th, retired). This car, with 38/8, was part of a lawsuit in early 1968 after Chapman sold them to one party after Lotus's American Midwest dealer Jim Spencer had already taken a cheque for them from somebody else. Spencer's client won the case and the two 38s ended up with a doctor in Indianapolis who sold 38/7 to Middleton M. Caruthers (St. Louis, MO). Caruthers entered it for Wib Spalding (Granite City, IL) at Hanford 14 Apr 1969 (DNS, clutch), Langhorne 16 Jun 1969 (DNQ) and Continental Divide 7 Jul 1969 (retired, clutch). Eggers, who was part of the team, heard that was sold to Bill Lough (Winfield, MO). According to Doug Nye, this car passed from Lough to Chuck Haines (St Louis, MO) then via dealer Steve Forristall (Houston, TX) to a Japanese collector. Believed retained 2002. It was acquired from Japan in 2014 (or possibly earlier) by Nick Fennell, and appeared at the Autosport Show at the NEC in January 2015 on the Classic Team Lotus stand, when it was in Clark's 1965 #82 livery. It was later restored by Classic Team Lotus accurately into its 1967 Clark livery, and appeared at the Goodwood Festival of Speed in July 2019. 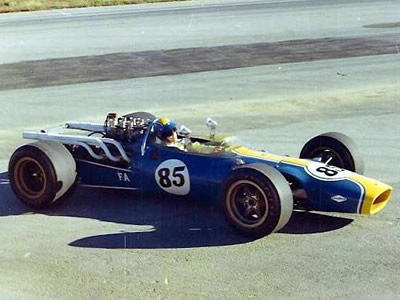 This car, as recounted under 38/7 above, ended up with with a doctor in Indianapolis. He sold the back-up car, 38/8, to Frank Eggers (St Charles, MO) for Formula A (later Formula 5000) events in 1968 and 1969. Also entered by Royal American Competition Ent Ltd for John Martin (Bristol, WI) at three races in April-June 1970 then for Eggers at Elkhart Lake July 1970. Eggers recalled that he "traded this car to someone in Texas for a Trans-Am Firebird". This would be the Jerry Crew (Dallas, TX) who advertised a Lotus 38 ("has to be good for something!") in August 1974. According to Doug Nye, this car went from Crew to Jim Haynes (of Lime Rock), to Sam Foster and then to a private collection in Virginia some time before 1990. Some time between 2013 and 2018, the car was acquired from the collector by dealer and collector Chuck Haines. In 2019, the car was sent to Classic Team Lotus for restoration.

The primary source for these histories is Andrew Ferguson's excellent book “Team Lotus: The Indianapolis Years”, completed by Doug Nye after Ferguson's death. Significant additional information was provided by Doug Nye, Michael Ferner, Noel Chiappa and Frank Eggers, who owned 38/8 in period, and by Ian Blackwell who keeps tabs on the cars today. Thanks also to Brian Brown for additional information and to Golden Gate Lotus Club, Ron Nelson, Frank Eggers, Dave Trapp and Ian Blackwell for the use of their photographs.