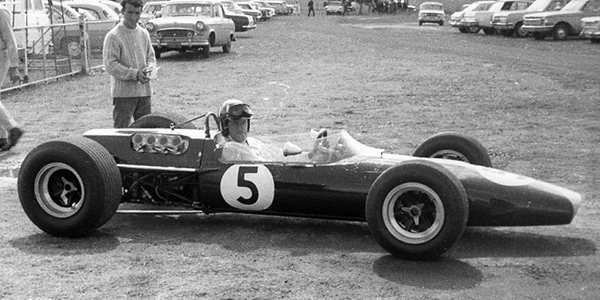 Graham Hill in the Lotus 48 on its debut at Wawick Farm in February 1967. Copyright Ted Walker 2010. Used with permission.

The elegant Lotus 48 was raced by Team Lotus works drivers Jim Clark and Graham Hill in 1967 and 1968, the Scot winning three races in 1967, but it was an accident in a Lotus 48 at Hockenheim in April 1968 that took his life.

Formula 2 moved to a 1600cc formula for 1967, and Lotus built a new car, the Lotus 48, with a slender monocoque following the theme of the Indy Lotus 42 and Formula 1 Lotus 43. The monocoque ended behind the driver's seat, and the new Cosworth FVA engine was supported by a tubular subframe bolted to the rear bulkhead. The car's suspension was derived from Lotus 33 practice, with inboard front springs actuated by rocker arms, and reversed bottom wishbones, twin top links and twin radius arms at the rear. Unlike almost all the other teams, Lotus preferred the ZF 5DS12 gearbox to Hewland's purpose-built new FT200.

The new car was ready in January, well before the start of the F2 season, and Graham Hill persuaded Colin Chapman to take the prototype out to Australia for the Grand Prix at Warwick Farm, where the new car ran impressively in third place until the transmission failed. Three cars were fielded in Formula 2 that year: two for works drivers Jim Clark and Hill, and one run in selected races by Lotus Components for Jackie Oliver. Clark won at Montjuich Park, Jarama and Keimola, while Oliver won the Grosser Preis F2 von Deutschland at the Nürburgring. This was a very competitive year in F2, with the Brabham BT23 edging out the competition thanks to the exploits of Jochen Rindt, but John Surtees' Lola T100 and Jackie Stewart's Matra MS7 also winning multiple races.

Lotus continued with the 48 into 1968, with a new car with lengthened monocoque for Clark to drive, and with detail improvements to the suspension pickups. After Clark crashed fatally while driving this car at Hockenheim in April the team continued, with Oliver driving R1 and Hill driving R2, but no more races were won. 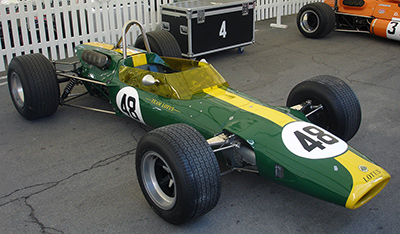 The restored Lotus 48 R1 at Montjuich Park in 2007. Image has been released into the Public Domain by its copyright holder.

The prototype Lotus 48 was taken out to Australia for Graham Hill to drive in the Australian Grand Prix at Warwick Farm in February 1967, when he retired. It was then the Team Lotus spare car at the start of the F2 season, first racing at the Nürburgring in April. Jim Clark then used the car in nine F2 races from May onwards, including his wins at Jarama and Keimola. Driven by Alex Solor-Roig at the Spanish GP in November, but his deal to race the car fell through. Retained for 1968, when it was Jackie Oliver's regular entry supported by Roger Frogley's Herts & Essex Aero Club and maintained by Derek Wilde. It was sold to Gerry Kinnane at the end of the European F2 season, and raced for him by Oliver in the Argentine Temporada in December. Then raced by John Watson at the opening F2 race of 1969, at Thruxton, but crashed and badly damaged. Repaired in Belfast with a new outer skin created by Fred Smith using the workshop of Belfast Corporation Bus Company on the Falls Road, and raced by John L'Amie for Kinnane later in the year. To Alan Fowler for 1970, and driven by Barrie Smith at the Thruxton F2 race in March 1970, but did not start. Reportedly sold by Fowler's D&A Shells to a collector in Nuneaton, and retained by him until 1997, when it was sold via John Harper to Bob Tabor (Llanrothal, Herefordshire). The car was restored by Tabor by Simon Hadfield, and the monocoque was rebuilt by Competition Fabrications (Attleborough, Norfolk) who carefully replaced the single-curvature Belfast-made outer skin with a correct double-curvature skin. A stronger rollhoop structure was also fitted. The rebuilt car was raced by Hadfield in the Goodwood Glover Trophy in September 1999. 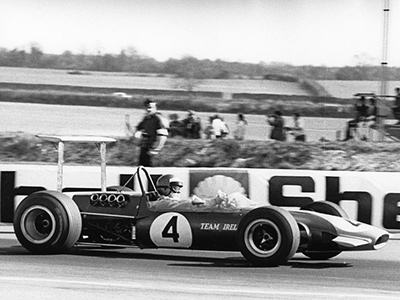 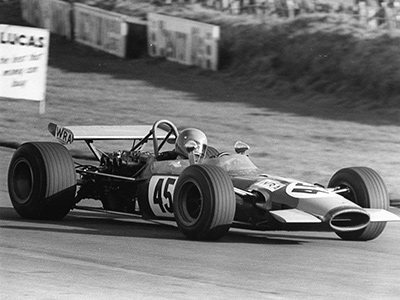 Beric Ewin in his Lotus 48 at the Boxing Day Brands Hatch meeting in 1971. Copyright Ted Walker 2010. Used with permission.

Graham Hill's regular Team Lotus entry in Formula 2 in 1967, raced by him in 16 of that season's races. Retained for 1968, when it was entered by Gold Leaf Team Lotus for Hill in a further eight F2 races. Sold to Gerry Kinnane's Team Ireland for 1969, and raced by John Pollock in the Thruxton F2 race in April and then in Irish 1600cc racing. Sold to Kevin Murphy in 1970 for Frank Keane to drive in Irish libre racing, primarily at Mondello Park, and in hillclimbs. Traded to Bobby Howlings for a Brabham BT30 in September 1970, and advertised by him the following month. Then evidently to Beric Ewin (Finchley, London) and fitted with a Ford twin cam engine for the new Formula Atlantic category in 1971 and 1972. Then unknown until acquired by a private collector in the late 1970s.

Entered by Lotus Components Ltd for Jackie Oliver at the opening race of the 1967 season, and then taken over by Jim Clark for Pau, Montjuich Park and Nürburgring, qualifying on pole position each time and winning at Montjuich. Clark generally preferred chassis R1 thereafter, and R3 was raced by Pedro Rodriguez at Reims, Moises Solana at Jarama, and then by Oliver again at the Nürburgring in August, at Brands Hatch and at Vallelunga in October. The car was damaged at Vallelunga but not badly, and why it was not seen again is unclear. It has been suggested that the car was rebuilt on a longer monocoque over the winter to become chassis R4.

A new car built for 1968 with a monocoque one inch longer than the previous cars. Raced by Jim Clark in the opening round at Montjuich Park but he retired. Then raced by Clark at Hockenheim on 7 April 1968, where the car left the road and hit a tree, killing its driver instantly.

After the 1968 season, the two surviving Lotus 48s and their transporter were sold to Gerry Kinnane, the Belfast car dealer. The cars and transporter were all repainted in Kinnane's Team Ireland colours and were maintained at Kinnane's workshop on Belfast's Falls Road. They were both entered for the Thruxton F2 race at the start of 1969, John Pollock in the ex-Hill R2 and John Watson in the ex-Oliver R1, and Watson had an extraordinary race in the final, passing car after car to lie fifth after 28 laps, only to lock a wheel at Cobb and slide off into the unforgiving barriers, tearing off two wheels and denting the monocoque. John Pollock raced the intact car in Irish 1600cc racing while the Watson car was repaired in Belfast and re-emerged later in the year. Both cars were in the hands of collectors before the end of the 1970s, and one remains in a very private collection, but the ex-Watson car was restored sympathetically for historic racing in the late 1990s.

The race results used for the 1967 season are from the Formula 1 Register's books. Thanks also to Irish motor racing historian Simon Thomas, restorer Simon Hadfield, Ted Walker, and to Chris Townsend.