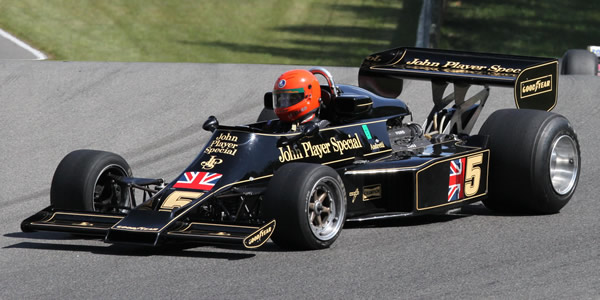 The Lotus 77 brought Lotus back from the nadir of 1975, with Mario Andretti replacing Ronnie Peterson and taking victory at the Japanese GP.

After the disaster of the Lotus 76, Ralph Bellamy was moved onto a gearbox project, and the job of creating the next F1 Lotus was given to a team consisting of of chassis designer Geoff Aldridge, Martin Ogilvie who designed the suspension and brakes, and Mike Cooke whose role was engineering supervision. Their brief was to build a car that was highly adjustable, so that wheelbase, track and weight distribution could be adjusted according to the type of circuit. The 77's monocoque was very slender, with a structural top panel in front of the dash, as would become familiar on the later ground-effect Lotuses. The front suspension had inboard brakes and inboard springs, but the whole structure sat outside the monocoque, directly in the airflow, almost as if chassis designer and suspension designer had not been talking to each other. This predictably caused problems with straight line speed, and Len Terry was brought in to design a more orthodox system with rocker arms and outboard brakes. At the rear, the radiators were again tucked in at the back of the monocoque, but McLaren-like cowlings were soon added. Officially the 77 was the John Player Special Mk II, with the three cars being JPS11, JPS12 and JPS14, but the more conventional names of 771/1, 77/2 and 77/3 are preferred here.

Initial tests of the car were very disappointing, and Ronnie Peterson left the team after the first GP, leaving the inexperienced pairing of Gunnar Nilsson and Bob Evans. When Parnelli pulled out of F1, Mario Andretti joined the team in time for the Spanish GP, partnered with Nilsson. The new Len Terry front suspension improved results, and shortly after Andretti's arrival, Lotus poached Tony Southgate from Shadow to act as chief engineer. He moved the oil cooler to the nose to improve weight distribution, and also added a cockpit-adjustable rear anti-roll bar, an idea cribbed from Andretti's Penske McLaren M24 Indy car, and a lighter compressed-air starter similar to those of McLaren and Brabham. Other "goodies" were coming across from Tony Rudd's R&D project (destined to create the Lotus 78), including a first skirt system. The car improved dramatically and Andretti led the Swedish GP for most of its distance, before the 77's Cosworth DFV exploded. The American's improving results pulled Lotus up to fourth in the constructors' championship, although not reliably on the pace of the Ferrari, McLaren or Tyrrell teams. In Japan for the final race of the season, Andretti took pole position - his first in F1 since 1968 - with the 77 set to its narrowest option and with virtually no rear wing. The race was held in soaking wet conditions, and while all the attention was on James Hunt's extraordinary drive, Andretti took a morale-boosting win for Lotus.

New Lotus 78s were ready for the start of 1977, so the next time a Lotus 77 was seen competing was when David Render borrowed 77/1 for the British Sprint Championship in 1978. All three 77s then remained at Lotus until early 1987, when 77/2 and 77/3 were acquired by dealer Bobby Howlings. The ex-Nilsson 77/2 has passed through a number of owners, mostly British, and has appeared at all nine Monaco Historics to date. Meanwhile, 77/3 passed into American ownership in 1989, and has remained a regular competitor in US historic racing since then. The car that was retained by the Chapman family, Andretti's Japanese GP winning 77/1, remains in the care of Classic Team Lotus.