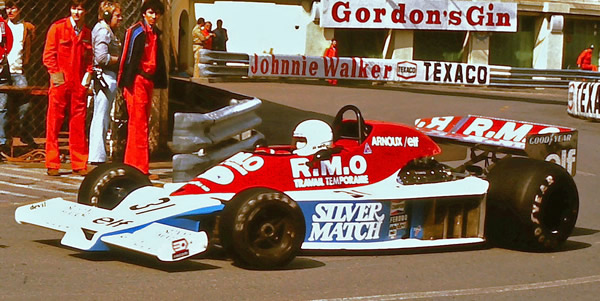 Rene Arnoux and the Martini MK23 did not get through pre-qualifying at the 1978 Monaco GP. Copyright Martin Lee 2017. Used with permission.

The little Martini team stepped up into Formula 1 for 1978 with driver Rene Arnoux, but the Martini MK23 was too conventional, too unreliable, and, ultimately, just not quick enough.

Tico Martini made his decision to move up to F1 at the end of 1975, and started work on the F1 design in mid-1976. By the time the car was completed, its design had been completely left behind, not just by the ground effect cars starting to appear, but also by advanced non-ground-effect designs such as the Wolf WR1, Tyrrell 008 and Williams FW06. The monocoque showed similarities to the very successful 1977 Formula 2 MK22, but the greater fuel load required a major change to weight distribution, with driver Rene Arnoux sitting further forward in the car. The main radiators were in front of the rear wheels, the oil radiator was in the nose, and the car had inboard front springs, the first Martini to do so. The French team used Cosworth engines, Hewland transmission, and Goodyear tyres. Weight was clearly a problem, as Tico Martini had made the car very strong, believing it could be made lighter during the season. Sponsorship came from RMO, a recruitment agency, Silver Match, a maker of cigarette lighters, and the ever-present Elf. Hugues de Chaunac would run the team, although Tico Martini, as team principal, planned to attend most races.

At the car's first GP, the South African GP, it was plagued with fuel system problems and Arnoux was unlucky not to qualify. The problems persisted at the International Trophy, where Arnoux non-started after an engine failure, and the team skipped Long Beach to try to resolve the issue. Arnoux then failed to even pre-qualify in Monaco, the engine being blamed again here. Another blown engine and a fuel leak were reported in Belgium, but at least Arnoux finally qualified, in a respectable 19th position, and also reached the finish, in ninth place out of 12 finishers. The team then went home from the Spanish GP without even practicing, having blown two more engines in testing. The car was next seen in a pre-qualifying session for the German GP, held on a Tuesday in late June, where Arnoux failed to get through. At the French GP in early July, the Martini had a revised oil radiator which finally cured its engine problems, and Arnoux was able to qualify 18th, finishing 14th of 18 finishers. He was then the final qualifier in Austria and finished ninth, the car now simply being "too slow". He qualified again at Monza, but De Chaunac conceded that the car was not quick enough, and there was no point in continuing.

The MK23 chassis remained at the Martini factory for many years. It was then moved to the nearby Magny Cours museum, where it is still on display.