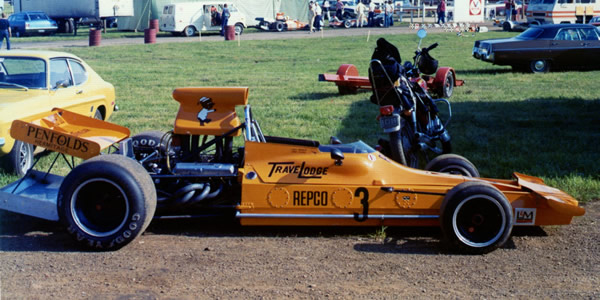 The Matich A51 in the paddock at Mid-Ohio in 1973. Copyright Terry Capps 2013. Used with permission.

After the Matich A50 series of cars, Frank Matich built a series of variants on the three remaining monocoques: the 1973 Matich A51, the side-radiator A52, and the 1974 A53.

A modified version of the A50, the A51, was taken to the US series in 1973 but the moment had passed and the A51 was not competitive. Two further variants would follow over the next year but Matich retired after the 1974 Tasman and no further cars were built. The surviving A51 was modified to A53 specification and was used regularly through to the end of the Australian F5000 series in 1982. All these A51, A52 and A53 variants were built on monocoques fabricated by Commonweath Aircraft Corporation (Melborne, Australia) to drawings supplied by Frank Matich.

The December 1974 edition of Racing Cars News carried an article about Matich's retirement and said this about the A51.

'No one in Australia saw the A51 run, although Matich regards the car as probably the best suited to an average local circuit. "It was the ultimate in development of our car as a front radiator car. It was the lightest car we built and it didn't behave on the bumpy American tracks as well as I would have liked. Our suspension didn't have sufficient movement, especially with heavy fuel loads."

This research was originally conducted by Aaron Lewis but has been extensively reworked in May and June 2003 with the assistance of Bryan Miller in Australia and Milan Fistonic in New Zealand. Thanks also to Wolfgang Klopfer for spotting omissions and to Terry Walker for the picture.

All and any further help would be gratefully received. Please email Allen at allen@oldracingcars.com if you can add anything. 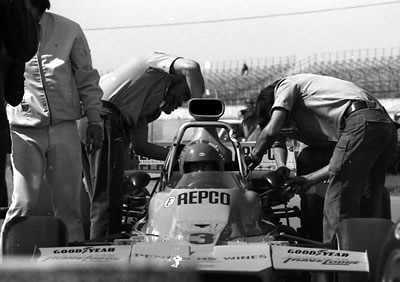 Some final adjustments for the Matich A51 at Michigan 1973. Copyright Mark Windecker 2005. Used with permission.

New model A51 built for 1973 US season. M Earley for Frank Matich: US 1973 (debut R1 Riverside 29 Apr 1973 and did first five races, best finish fifth at Michigan). Advertised by Frank Matich Racing in Racing Car News November 1973. Reported to have been bought by Paul Feltham for the 1974 Tasman but deal fell through. Sold to Kevin Loy and raced by Lella Lombardi at Sandown Park November 1974 and Australian GP November 1974; raced by Loy at Oran Park 2 Feb 1975. To Ian Douglass for Surfers Paradise the next weekend. May then have returned to Matich.

To John Goss by August 1975 "for spares"; painted blue and converted to later A53 spec. i.e. rear radiators. Raced by Goss in the Australian Internationals Feb 1976 and won the Australian GP at Sandown Park in September 1976 in Goss' hands. Retained for the Rothmans International series in Feb 1977, and driven by Henri Pescarolo at one race at Calder in March 1977. Retained again by Goss for the 1978 Rothmans series. For Jim Richards Australian Internationals 1979; then to Greg Doidge October 1979: Winton 28 Oct 1979, Australian Gold Star 1980. Sandown Park 13 Sep 1981, Winton 25 Oct 1981, on entry list for last F5000 race, Oran Park 21 Mar 1982. Subsequently to 'D Richardson' Sep 1982, then to John Hermann (Sydney) December 1983. Last raced by Hermann in 1988. Sold by Hermann to Chris Hocking and raced in the MSC F5000 Tasman Cup Revival Series, first appearing at the Australian Grand Prix support race in March 2011. Also appeared at the Phillip Island Classic in March 2012. Sold at some point to Bruce Simpson (NSW). Bryan Sala reports that Simpson had the A53 in March 2016. In June 2017, Glenn Welch drove the "ex-Goss" Australian GP winner in the Sydney Classic Speed Festival.

Built early 1973 alongside A51-005 and taken to the US as a spare car. Driven by Vern Schuppan in practice at Watkins Glen but did not start). The car was then returned to Australia and rebuilt to A52 specification for the 1973 Australian season. It was debuted by Frank Matich at the opening round of the series at Surfers Paradise 2 Sep 1973 where he qualified on pole but retired. The car was later crashed in testing by Bobby Muir and written off.

The tub could have been repaired but nothing was done with it. According to Rory McDonald, who then worked at Matich's, it sat at the back of the shop at Cremorne until about 1977 or 1978 at which point he sent it back to CAC and it was never seen again.

After the abortive US adventure, Matich built a revised car on the second A51 monocoque that had been briefly used as Matich's spare car in the US. This car was built for the 1973 Australian Gold Star season, and had side radiators, a shorter wheelbase, shorter nose and updated suspension. After just a single race, Matich decided to pull out and put all his cars up for sale. The A52 was later wrecked in testing.

After the A52 was wrecked, Frank Matich built up the seventh Matich monocoque to a revised A53 specification for the 1974 Tasman series. He skipped the New Zealand races, and Bob Muir raced the A53 at the first Australian race, retiring at Oran Park. Frank then raced it at the remaining three races but managed just a third and a fourth. After the series, Matich announced his retirement.

The next F5000 racing was at the beginning of August, when the Gold Star series restarted, and John Goss's backers bought him his choice of Matich, the ready-to-race A53 being preferred to the ex-US A51. Goss later converted this car to Ford power but it was not a success, and was returned to a Repco-Holden engine when in Mel McEwin's hands. 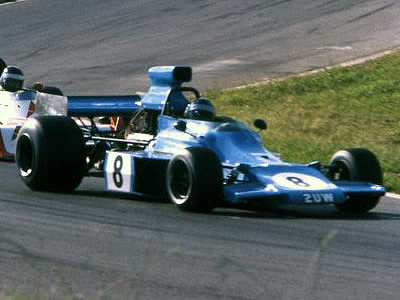 John Goss in the side-radiator A53 at Oran Park in May 1975. Copyright Terry Walker 2006. Used with permission.