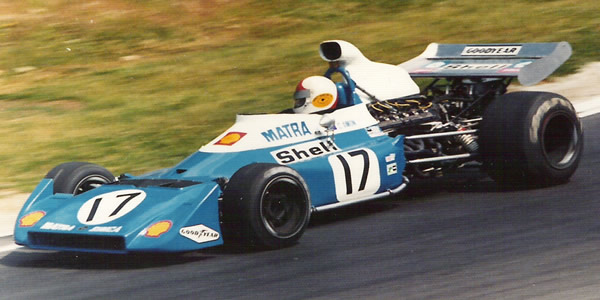 Chris Amon during practice for the 1972 British GP in the new Matra MS120D. After damaging this car, he raced the older MS120B. Copyright Richard Bunyan 2007. Used with permission.

The 1970 Matra MS120 was Bernard Boyer's third new design in three years, using a rectilinear monocoque design. The car was fitted with the new MS12 V12 engine, and would be used, through 'B', 'C', and 'D' variants, for the next three seasons.

After the enormous success of the MS80, Boyer could have been expected to follow its bulbous lines for 1970, but the MS120 was all straight lines, with fuel contained in sloping sidepods to generate a degree of downforce. Suspension geometry was similar to the MS80, but with a narrower front track. The MS9 V12 engine had been abandoned after the 1968 F1 season, and a new MS12 had been designed, with stiffer crankcase so that it could be used as a stressed chassis member, and a new cylinder head with narrower valve angle. Drivers Jean-Pierre Beltoise and Henri Pescarolo picked up where they had left off at the end of 1968. They started with MS120-01 and MS120-02 in South Africa, where Beltoise finished fourth, before Beltoise's MS120-03 was ready for the Spanish GP. Beltoise was the quickest of the pair, but Pescarolo scored the first podium finish for the MS120 when he finished third in Monaco. Beltoise came up through the field to finish third in Belgium, and then put MS120-03 in the front row for the French GP and led for 11 laps before his tyres went off. Beltoise finished third again in a slipstreaming race at Monza, but by the end of the year, the MS120s were struggling to qualify in the top ten.

Chris Amon replaced Henri Pescarolo for 1971, and took a surprise win at the non-championship Argentine GP in Pescarolo's old MS120-02. A new car then appeared for Amon in South Africa, described as MS120-04 or MS120B-04, but also referred to as Beltoise old car, suggesting it was built from MS120-03. This car was gradually updated into the true MS120B specification which was defined by Beltoise' new MS120B-05 at the Spanish GP. Amon finished third in Spain, but the season was otherwise a disappointment, with the Kiwi only managing a further three points. He raced MS120B-06 for much of the season, but a new MS71 engine proved unreliable. In 1972, Matra ran a single car for Chris Amon, with Jean-Pierre Beltoise being 'loaned' to BRM. Amon's late-season MS120B-06 was updated to MS120C specification, which involved revised front suspension geometry, a new airbox, and an MS71 engine now generating a claimed 450 bhp. A new MS120D appeared for the French GP, with a tubbier monocoque reminiscent of the MS80, and a fuel cell behind the driver again. Amon qualified on the front row and led until a puncture, repeating Beltoise equally implausible performance at the same race two years earlier. At the end of the year, Matra pulled out of F1 to focus on sports car racing, but many of the staff would return a few years later in a different guise.

As chassis MS120-03 appears to have morphed into MS120B-04, only six MS120s now exist. Of the two 1970 specification cars, the first has been on display at the Matra Museum in Romorantin for a very long time, and the second was presented to Jean-Pierre Beltoise who kept it until his collection was auctioned in 2005. It is now in the Netherlands. All three of the MS120B/C cars were acquired by Antoine Raffaëlli. MS120C-04 was bought by a Monegasque owner in 2001, who had it completely restored for the Monaco Historics in 2002. The only car to remain in 'B' specification, MS120B-05, remained with Raffaëlli until it was auctioned in 1997. After extensive restoration, it appeared at the Monaco Historics in 2008. The other MS120C, chassis MS120C-06, was in running condition in the late 1990s, but has also been subject to a complete restoration since joining Abba Kogan's collection in 2005. All three of these MS120B/Cs appeared together at Monaco in 2008. The final car was the MS120D, which has remained with Matra in running condition, and appeared at the Goodwood Festival of Speed in 1996.