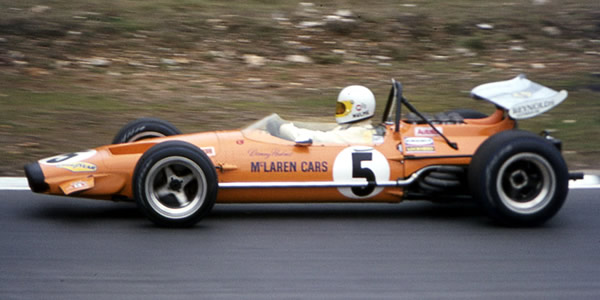 Denny Hulme in the McLaren M14A at the 1970 Race of Champions. Copyright Gerald Swan 2017. Used with permission.

A development of the 1969 McLaren M7C, the McLaren M14A was a clean, straightforward yet highly conventional car, sufficient to take Denny Hulme to fourth in the championship, but was not a competitor to the Lotus 72 or Ferrari 312B.

The McLaren M14A continued the general theme that had begun with Robin Herd’s successful McLaren M7A in 1968 and continued through the one-off M7C the following year while the team had wasted time on the four-wheel-drive M9A project. The new car was credited to McLaren’s chief designer Jo Marquart, who had joined from Lotus in 1969 and had been given responsibility for the M9A, but his most successful work had been the development of the McLaren M8 series of Can-Am cars with McLaren’s other main designer Gordon Coppuck. The principal changes from the M7C to the M14A concerned inboard rear brakes, and details such as new front uprights and increased fuel capacity which resulted in a narrower cockpit. Suspension was outboard all round, with top and bottom wishbones at the front, and reversed bottom wishbones, single top link, and twin radius arms at the rear. The M14A’s nose was slightly wider and flatter, and housed the water radiator, with the oil radiator again at the back. McLaren headed into 1970 with the same driving partnership of Bruce McLaren and Denny Hulme.

The season started quite well for McLaren, with Hulme second at the South African GP and Bruce second in Spain, but then Hulme suffered burns to his hands at the Indy 500 when a McLaren M15A caught alight, and that was followed by Bruce’s death in a testing accident at Goodwood. Dan Gurney and F5000 star Peter Gethin were bought in to replace Hulme, but Gurney was no longer competitive and Gethin did not qualify once inside the top ten. Hulme’s return from injury was impressive, “The Bear” finishing on the podium three more times and taking fourth place in the championship.

Denny Hulme's M14A was retained by the team for 1971, initially as a spare car and then as a third team entry for Jackie Oliver. It was then sold to Tony Dean and converted to Formula 5000, racing on for many years in F5000 and then in speed events. The ex-Gethin car was also converted for F5000, this time in the US, but its career was very short. A third M14A was used as a test car for a while, as McLaren explored different suspension options, and was eventually sold off through the trade, re-emerging many years later to confuse the historic racing authorities with its previously unseen front suspension modifications. The owner successfully fought off an attempt by the FIA to make him cut off the front suspension to make it resemble the way the car had appeared at F1 races.