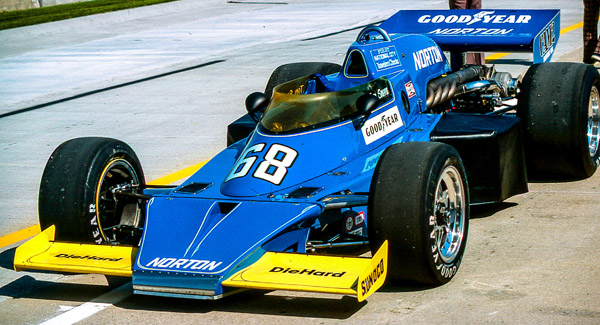 The McLaren M16C was the most successful of the M16 variants, with works driver Johnny Rutherford winning eight races in M16Cs, including both the Indianapolis 500 and the Pocono 500 in 1974.

After the M16-series cars had won three of the six 500-mile races held since their debut, the basic design was refined further for 1973 with the M16C, distinguished by a slimmer headrest fairing and a slightly lower and wider monocoque. The five fuel cells of the M16B were reduced to four, allowing for a five-gallon oil compartment in the left side of the monocoque, and the monocoque ended behind the driver's seat with the Offy mounted as a stressed member. Suspension geometry was unchanged from the original M16 and transmission was via a Hewland LG Mark 2 gearbox.

Note that numbers of races shown for each car may not be correct as we do not (yet) know exactly how backup cars were used as short track cars. The Team McLaren backup in 1974 and 1975 has been identified, and good progress has been made for Penske Racing, but the details of Salt Walther's cars are still being worked through. All the cars have small detail differences that allow them to be identified, but finding photographs from every single race is a challenge. 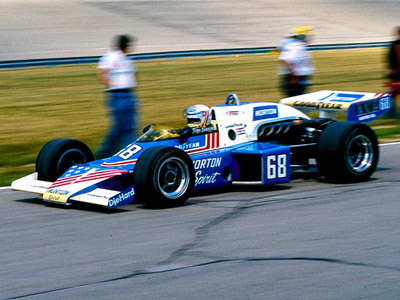 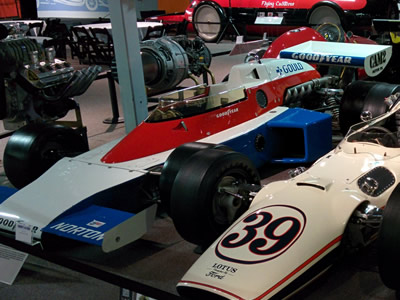 The Harrah Collection's McLaren M16C, on display at the National Automobile Museum in Reno, NV, in May 2014. Licenced by Rahul Nair under Creative Commons licence Attribution-NonCommercial 2.0 Generic. Original image has been cropped.

New to Roger Penske for Bobby Allison to drive at the 1973 Indy 500 as the #12 Sunoco DX car. Sold to Roy Woods and appeared at Ontario in August/September 1973 as the #74 Carling entry for John Mahler, who crashed it in the race. It evidently returned to Penske and was rebuilt as the #8 entry for Gary Bettenhausen in 1974. Used by Mike Hiss after Bettenhausen was injured in a dirt race in July 1974. Taken over by Tom Sneva in 1975 as the #68 Norton Spirit entry but wrecked in Sneva's huge accident at Indy in 1975. Rebuilt later in the season and rejoined the Penske team to be a backup car for Sneva in 1976. Its last known appearance was at Michigan in July 1976. History then unknown until 2009 when it was part of the Harrah Collection at the National Automobile Museum (Reno, NV). Presumably it had been bought by Bill Harrah, founder of Harrah's Casinos. After Harah's death in November 1978 his 'Harrah’s Automobile Collection' was acquired by Holiday Inns and started to be broken up and auctioned in the mid-1980s. In response to ensuing outcry, Holiday Inns agreed to donate 175 cars and Harrah's research library to a new Harrah Automobile Foundation and this became the basis of the National Automobile Museum which opened in Reno, Nevada, in 1989. The car is in Sneva's 1977 red, white and blue Norton/Gould/CAM2 livery, suggesting it was used as a show car in 1977. Still in the museum in July 2021. 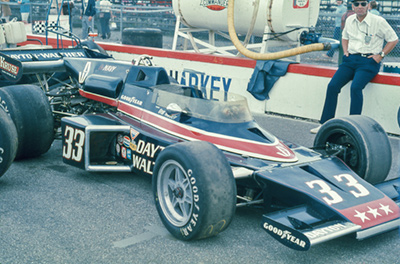 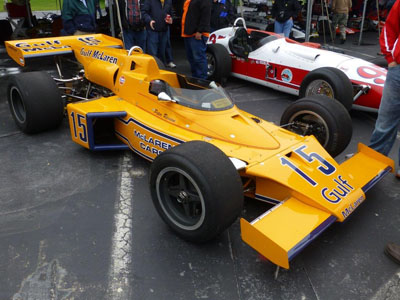 New for McLaren Cars at the start of 1973, and raced by Johnny Rutherford at the early short-track events. Possibly used by him at short track events later in the year. Also driven by Peter Revson as the #15 Gulf entry at Pocono and Ontario in 1973, taking pole position at both events. By early November, it had been acquired by George Walther, replacing the older M16 in which Salt Walther had been badly injured at the 1973 Indy 500, and was prepared by Dayton-Walther chief mechanic Tommie Smith from the team's new base in Dayton, Ohio. It was driven by Salt at the Indy 500 in 1974 as the #77 Dayton Walther Spl, but the Walthers then acquired M16C/6, retaining M16C/2 as his #33 spare car at the Indy 500 in 1975 and 1976. It was raced by Bob Harkey as the #33 Dayton-Walther entry at Indy and Pocono in 1975, and by David Hobbs at Indy in 1976. How it was used during the rest of the 1975 and 1976 season is unclear but it was quite possibly used as by Salt Walther a short-track car. Relegated to the team's third car for 1977 when Walther acquired M16C/5 from McLaren. Sold with M16C/6 to Jerry Karl/William R. Compton Sr for 1978. M16C/6 was converted to Chevrolet V8 power and entered by Tonco Trailer until 1981 and M16C/2 was kept as a backup until M16C/6 was wrecked at Riverside in 1981. M16C/2 was then used for the last three races of the 1981 season. Both M16Cs were sold to Chuck Haines (St Louis, MO) but M16C/2 had moved to Ron Rickard (San Diego, CA) by 1986 when he drove it at the Palm Springs historics. Sold to Tony Roberts and Duncan Fox (Auckland, New Zealand) in 1997 and used in historics with an aluminium 355 ci Chevrolet V8 from 1998 to 2000. Sold to the Mathews Collection still with its Chevrolet engine. From Mathews to Aaron Lewis (Cessnock, NSW, Australia) in 2009. Displayed by Lewis at the Historic Indycar Exhibition in 2017 and 2018. Sold to American collector John Stafford III (Chicago, IL) in October 2018. On display in the Petersen Museum (Los Angeles, CA) in October 2022. 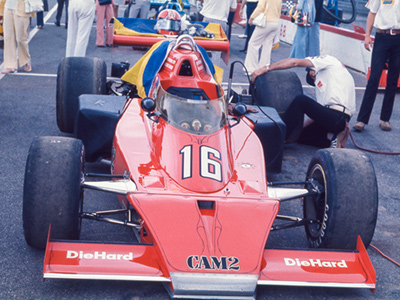 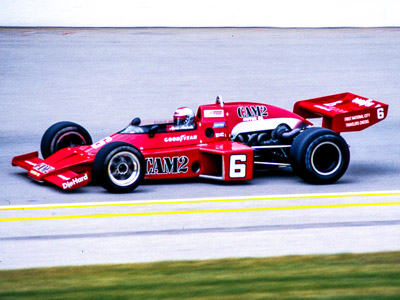 To Roger Penske for Gary Bettenhausen to drive during the 1973 season as the #5 Sunoco DX car, and used by him at all races that season. Entered for Mike Hiss as the #68 Norton Spirit entry at Indianapolis and Michigan in 1974. Then the #16 CAM2 Motor Oil entry for Bobby Allison at four long-track races in 1975. Then raced by Mario Andretti for Penske as the #6 in 1976 at the Indy 500 and Pocono. Sold to Bill Simpson later in 1976 (still as #6) together with M16C/4. It then became part of Teddy Yip's Theodore Racing team in 1977 as their #39 but was crashed very heavily by Clay Regazzoni in Indy practice. The wrecked car was cubed by Yip. 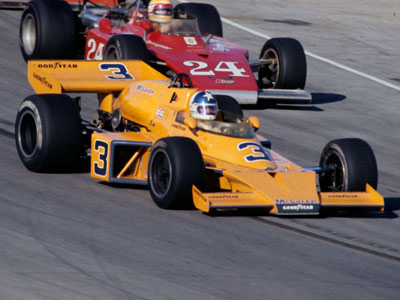 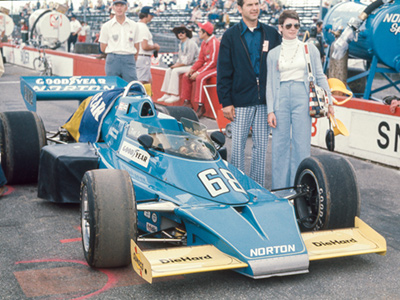 The history of this car in 1973 and 1974 remains unproven, but believed to be new for Peter Revson as McLaren Cars' #15 entry at the 1973 Indy 500. Crashed by Revson and it is unclear when the car returned to the team. Almost certainly Johnny Rutherford's black rollhooped short track car in 1974. McLaren records show that M16C/4 was sold to Roger Penske in November 1974. Raced by Tom Sneva in 1975 as the #68 Norton Spirit entry after his original M16C was wrecked at the Indy 500. Used again by Sneva as his #68 car during 1976, and appears to have been the #68 driven by Mario Andretti in two late-season races. Sold to Bill Simpson with M16C/3 and became part of Teddy Yip's Theodore Racing team in 1977 as their #38 car, raced by Clay Regazzoni at the Indy 500 and by Rick Mears later in the season. Unknown in 1978 but reappeared in 1979 as Bill Alsup's #41 WASP Racing car. Raced by Phil Caliva for Alsup Racing in 1980 as the #47 and at Indy 1981 where it was "extensively damaged" on 12 May in an accident during practice. Not seen again. 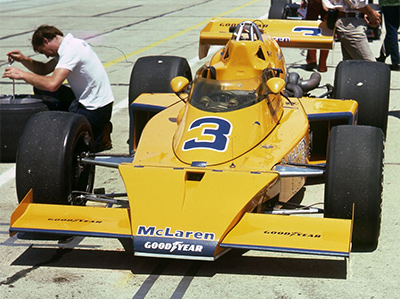 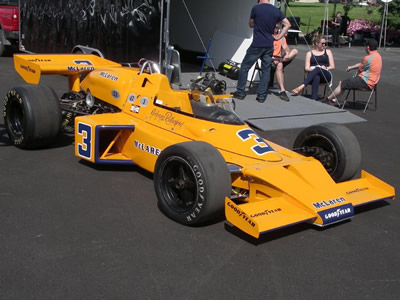 New for McLaren Cars to be driven by Johnny Rutherford as the #7 Gulf entry in 1973. He used this car at the Indy 500 but may have used M16C/2 (or even M16C/4) at other races that season. Raced again by Rutherford in 1974 as the #3 car, winning the Indy 500, but he used another M16C at short track events that year. This car then became Rutherford's short-track car in 1975 and 1976. Sold to George Walther to be Salt Walther #33 backup car at Indy in 1977 but how it was used that season is unknown. Entered by Walther at the 1978 Indy 500 as the #34 for Graham McRae but he was bumped. Sold by Walther to Rick Carroll (Jensen Beach, FL) and restored. Sold by Carroll's estate in 1990 via Sotherby's Palm Springs Auction for $495,000 to Patrick S. Ryan (Montgomery, AL). Loaned by Ryan to the IMS Museum but also attended various concours events while owned by Ryan. Repainted by Paintergeek Paintworks (Indianapolis, IN) in May 2013. Sold by Ryan through RM Auctions at Monterey in August 2013 for $3,250,000 to web entrepreneur Bill Oesterle (Indianapolis, IN). On display at the Historic Indycar Exhibition in May 2016. In 2018, the car was acquired by McLaren, and in March 2018, it was put on display at the McLaren Technology Centre. 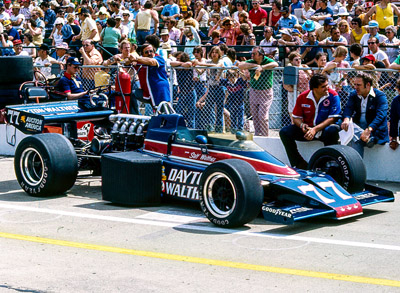 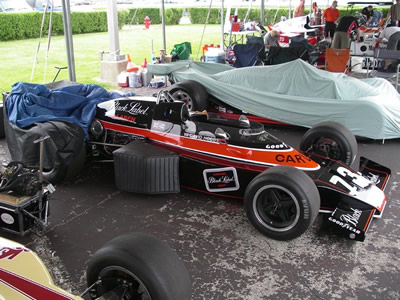 New in 1974 for McLaren Cars as a M16C/D for David Hobbs to drive at the 1974 Indy 500 as the #73 Carling Black Label entry. Sold to George Walther by early July for Salt Walther to drive and used as his main #77 car at the Indy 500 in 1975, 1976 and 1977. Walther had other McLarens during this time and he is likely to have used those on short tracks. Sold with M16C/2 to Jerry Karl for 1978 and entered as his #88 Offy car at the 1978 Indy 500 with Frank Fiore as chief mechanic and a #89 RasCar/Atlanta as his backup. This was Karl's car at Pocono, Ontario and Trenton later in 1978, and again at five races in 1979. It was modified as a "McLaren-Karl" for 1980 and 1981 but was wrecked at Riverside in August 1981. Karl then used his backup M16C/2 in the last few races of the season. Both M16Cs were sold to Chuck Haines (St Louis, MO) and stored for some years, before undergoing a complete restoration in 2015. Appeared at the Historic Indycar Exhibition in May 2016 in immaculate Carling livery. To Rob Dyson (Millbrook, NY) of Dyson Racing c2017. Entered in the the Amelia Island Concours March 2018, winning the Hulman Memorial Award for Best Race Car. In 2021 and 2022, the car was on display in the Saratoga Automobile Museum (Saratoga Springs, NY), together with other Dyson Racing cars

This history is a result of the collaborative research of Allen Brown and Simmo Iskül, with additional information from Michael Ferner, restorer Duncan Fox, owners Aaron Lewis and Chuck Haines, and researchers 'gbl', Luis Mateus, Tom Schultz and Gerry Measures. Thanks also to Glenn Snyder, Richard Deming, Ian Blackwell and Dave Reese for their photographs.