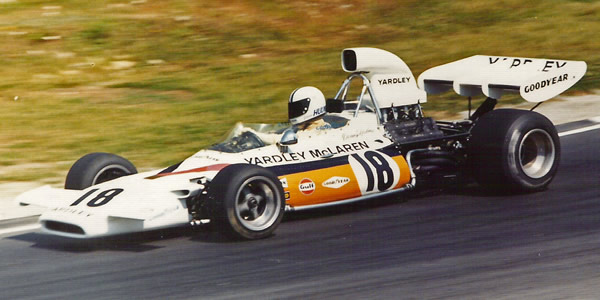 Denny Hulme in the McLaren M19C on his way to fifth place at the 1972 British GP. Copyright Richard Bunyan 2007. Used with permission.

A development of Ralph Bellamy’s 1971 McLaren M19A, the McLaren M19C did not win any Grand Prix, but a series of podium finishes took Denny Hulme to third in the 1972 World Championship.

Quite why the development of the M19-series of cars leapt from M19A to M19C was never satisfactorily explained, and the specification of the new car was only an incremental change. When the M19C was first seen at the International Trophy in April 1972, Pete Lyons in Autosport noted that the front chassis bulkhead was fabricated instead of cast, presumably for reasons of weight, that the wishbones were lighter, and that it incorporated the externally-accessible fire extinguisher pull that was being mandated. It also had smaller-diameter, solid-section driveshafts, which were also fitted to the M19A, and a revised rear wing. The M19C’s front suspension was the same variable rate system as the M19A, but with orthodox rear suspension inherited from the 1970 M14A, the M19A’s original rising-rate rear suspension having been abandoned in September 1971.

Although the changes were minor, the M19C was developed into one of the most effective cars of 1972, behind only the Tyrrells and the Lotus 72D. With Yardley money giving the team greater resources, and bolstered by great success in Indy racing and in Can-Am in 1971, the F1 team bubbled with confidence and enthusiasm. The cars were always immaculately prepared and the crew were always spotless, leading to a sponsor much comfortable with the way its money was being spent than it had been with BRM. In Peter Revson, Hulme had a teammate that brought out the best in him, and the Kiwi had a string of fine performances in the M19C: a win at Oulton Park’s Gold Cup in May, third place at the Belgian GP, second on the grid in France, second place in Austria, and then three successive third places to round out the season. A second car was built for Revson, and he took pole position in it in Canada and finished second in the race. Despite missing three races due to his American commitments, Revson ended the season fifth in the championship.

McLaren introduced the McLaren M23 for 1973, and the old M19s were pensioned off, following the M14s into Formula 5000. In February 1973, the ex-Revson car was sold to Lothar Motschenbacher, who arranged to have it converted to Chevrolet power for the American F5000 championship. The M19 conversion was completed by Leo Wybrott at McLaren and the car was entered for Derek Bell to drive in the first race, but then Motschenbacher changed his mind and McLaren sold the car instead to regular F5000 customer Tony Dean for the European series. However, Dean had already bought a Chevron B24 for 1973 and was getting good results from it so, before the M19 was ready to be tested, Dean sold it on to Brian Robinson. When Dean tested it he immediately wanted to buy it back but Robinson wasn't interested and Dean was beaten to the other two M19s by Tony Kitchiner. Robinson drove the M19C for three seasons of F5000, after which it was converted back to F1 specification for HSCC Historic F1 in the early 1980s. Meanwhile, Kitchiner for some reason only converted the older M19A and left the ex-Hulme M19C hanging in a roof until early in 1975 when it was bought by Howden Ganley. After a quarter of a century in his possession, the M19C was sold to McLaren International and forms part of the company's collection.