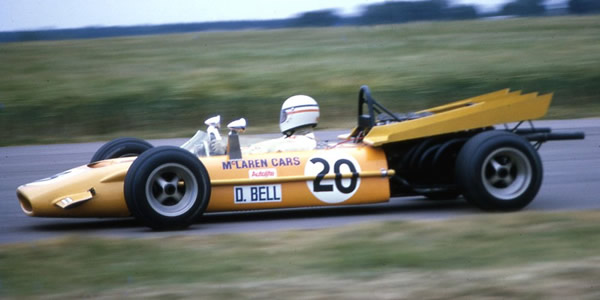 Like Lotus and Matra, McLaren built a four-wheel-drive F1 car for 1969, the McLaren M9A, but the car was only raced once and then put aside.

Robin Herd had left once he had completed the design of the McLaren M7A, and his former assistant Gordon Coppuck had designed three M7A derivatives: the M7B, Formula 5000 M10A, and M7C. Early in 1969, Jo Marquart was recruited from Lotus to take over as chief designer, and he was charged with turning Bruce McLaren's four-wheel-drive concept into reality. The monocoque of his stubby M9A was of conventional construction, with two D-shaped fuselages connected by the floor panel and a series of steel bulkheads. Fuel was held in these fuselages, with a large water radiator in the nose and an oil radiator sitting up above the engine. The transmission was of McLaren's design but based heavily on the Ferguson design, and utilising the pinions of a Hewland DG300 gearbox. Inboard brakes were used all round, and the car had inboard springs at the front and back, actuated in each case by one arm of the top wishbone. As on the Lotus 63, the driver sat very far forward, with his ankles underneath the front drive shaft.

Derek Bell was the brave man selected for extensive testing of the car in July 1969 prior to its debut at the British GP, and it had sprouted wings at the front and rear by the time it got to Silverstone. Bell found that it was down on revs so the massive rear wing was trimmed, and overnight suspension changes had the car more to Bell's liking by the Friday morning timed practice session, where he set a time of 1m 26.9s, five seconds of the leader's pace. In the afternoon session, the M9A's gearbox failed almost immediately, leaving Bell only able to improve marginally to 1m 26.1s. He started the race 15th on the 17-car grid, with one of the 4WD Lotus 63s alongside him, the second 63 behind him, and the 4WD Matra MS84 bringing up the rear. It was not a good advert for four-wheel drive. He made up a couple of places at the start, leading the 4WD contingent and actually ahead of a second-hand 2WD McLaren, but spun at Beckets on the fifth lap, and later that lap the rear suspension carrier broke, ending his race.

The team's busy schedule in both F1 and Can-Am left no time to develop the M9A further, so it was not seen again that season. Other teams' experiences proved that 4WD was a dead end, there being no performance advantage sufficient to offset the increased weight and complexity, so the car remained unused until it was sold to Tom Wheatcroft in June 1971. It was in his Donington Museum when it opened in 1973, and remained there until after Wheatcroft's death in 2009. It was then bought by a French collector and immaculately restored for him by Hall & Hall.

Please contact Allen Brown (allen@oldracingcars.com) if you can add anything.