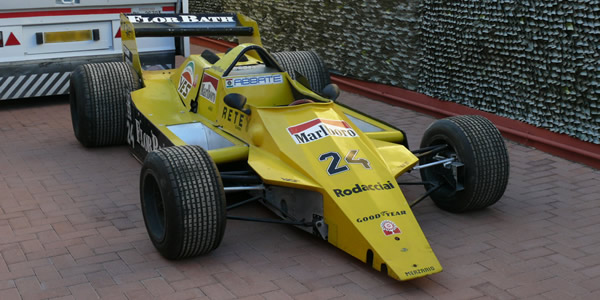 The Merzario A3 in October 2011, just before the start of its restoration. Copyright Matteo Maria Tullio 2011. Used with permission.

The Merzario A3 was the least successful of Arturo Merzario's four F1 cars, and never qualified for or started a race. Nominally a ground-effect car, it was built up from an earlier car and was too wide and too heavy to be effective.

Arturo Merzario had an updated Merzario A1B ready for the start of the 1979 season, but in January new chief mechanic Simon Hadfield joined the team from ATS, one of the few teams to have built a functioning ground effect car in 1978. Hadfield's job at Merzario was to build a ground effect car from the tub and rear end of the original Merzario A1, which was itself an evolution of the team's March 761B. The team had already removed the outer skins, and would replace them with much narrower outer panels, from which steel subframes were hung to hold the sidepods. Hadfield fashioned inboard front suspension, copying the rocker arms of the Ferrari 312T4 that made its debut at the South African GP, and the sidepod profiles were based on Hadfield's experience of the ATS D1. Sponsorship came from FlorBath and Rete Gamma, but there was also support from Merzario's personal sponsor Marlboro.

The A3 was ready in time for the Race of Champions on 18 March, and was transported to Brands Hatch from the team's base at Carate Brianza, just north of Monza, only to find that the race had been snowed off. It first turned a wheel at the Long Beach GP, where it was immediately apparent that the A3's tub was too wide, and the car was significantly overweight, despite the team's claims that it used honeycomb materials and was right down on the weight limit. The ground-effect sidepods did not convince Motor Sport, whose reporter expressed some doubt that the air would know what to do when it got under the car. An engine broke in practice at Long Beach, and then the suspension, so Merzario returned to the A1B which he managed to qualify. In the A1B, 'Art' was just a tenth of a second slower than Hans Stuck in the ATS D2, a fraction quicker than Hector Rebaque in his Lotus 79, and four tenths quicker than last man Derek Daly, in the dreadful Ensign N179. The Kauhsen team joined the F1 circus for the next race, the Spanish GP, and driver Gianfranco Brancatelli was by far the slowest, with Merzario second slowest in the A1B, after more problems with the A3, just behind Daly whose team had resorted to their 1977 model. In Belgium, Arturo said the A3 felt well-balanced but complained of the tyres supplied by Goodyear. He was quicker than both the farcical Kauhsen and Daly's 1977 Ensign, but was half a second off qualifying pace. Kauhsen withdrew before the Monaco GP, and with Arturo injured after falling down the stairs at his workshop, Brancatelli moved from Kauhsen to drive the A3, but could not even pre-qualify. At the French GP, Merzario was slowest of all in the A3, nearly two seconds slower than Patrick Gaillard in the Ensign N179, and the team went straight back to Italy after practice to complete the Kauhsen-based Merzario A4. The D3 was only taken to races as a backup after that.

After the Merzario team left F1 at the end of 1979, the Merzario A3 was turned into a show car, using a Chevrolet V8 engine block to hold it all together, and was sold in December 1981 to an Italian owner who mounted it on a wall. It was sold to father-and-son historic racers in October 2011, who immaculately restored it over the next three years. It was raced by Bruno Ferrari in two historic events in 2015, the Coppa Intereuropa Storica at Monza, and the AvD-Oldtimer-Grand-Prix at the Nürburgring. He qualified last in Italy, and last but two in Germany, very much in line with its period performances.

So why, with so many sources using the name "A2/03" for this car, is OldRacingCars.com using the model name A3? The problem here, as with many Italian cars, is that model names were not really part of the teams' thinking. We see this especially with Osella, but also with Alfa Romeo's various N179 models. What can clearly be seen is that Arturo Merzario was numbering his cars independently of their model, so 01 was his first car, 02 was the late-1978 car that became the A1B, 03 was the Hadfield-built car, and 04 was the Kauhsen-based car. Where a model name was being thought about, it appears that "A2" was used in some way for all three 1979 designs.  As elsewhere, we are therefore forced to retrofit model names to make sense of this, as "A2/03" and "A2/04" clearly do not refer to third and fourth cars of the same model. Therefore the decision here is to ignore the A2 designation, as any use of it is potentially misleading, and use the designations A3 and A4 for the third and fourth cars.