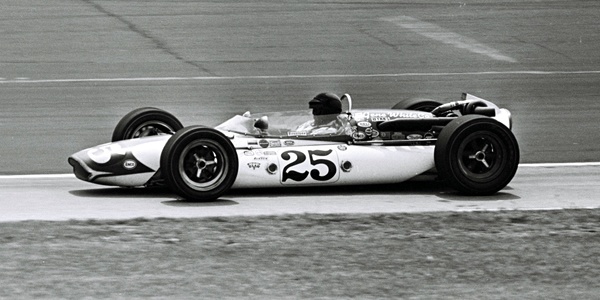 Lloyd Ruby at the Speedway in 1968 in his new '68 Mongoose. Part of the Dave Friedman collection. Licenced by The Henry Ford under Creative Commons licence Attribution-NonCommercial-NoDerivs 2.0 Generic. Original image has been cropped.

After the success of the 1967 Mongoose, Dave Laycock produced a revised car for 1968 with which Lloyd Ruby led the Indy 500 and later won twice at Milwaukee. The only car built was destroyed in a fire at Dover Downs in August 1969.

Laycock stayed with the successful Brabham-Mongoose formula for 1968 but the new car was narrower and contained some refinements over the team's 1967 car. It was produced in time for the 1968 Indy 500 where Ruby qualified it with the fifth best time, with only two Lotus 56 turbines, Mario Andretti's new Hawk III and Bobby Unser's 1968 Eagle ahead of him. He went even better in the race, setting a record race lap speed of 168.666 mph and leading until the 174th lap when a faulty coil sent him into the pits. Despite losing six minutes in the pits, he was still able to finish fifth. Ruby was similarly unlucky a year later when, preferring this car to the 1969 model, he was leading the race by over a lap when he came in for his second scheduled pit stop. He moved off before the refuelling hose was disconnected and the resulting damage put him out of the race.

The 1968 Mongoose was destroyed in an accident during practice at Dover Downs in August 1969. The car sun and hit the wall, damaging the front, left side and rear of the car. Ruby was able to get out of the car quickly but suffered serious burns to his face and was taken to Kent County Hospital. He would not race again until November.

If you can add anything to this history, please contact Allen Brown (allen@oldracingcars.com). 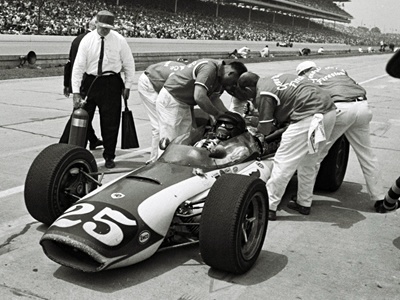 Lloyd Ruby waits in the pits while the coil is fixed as his Indy 500 chances slip away once again. Part of the Dave Friedman collection. Licenced by The Henry Ford under Creative Commons licence Attribution-NonCommercial-NoDerivs 2.0 Generic. Original image has been cropped.

New for the Gene White team and first appeared at the 1968 Indy 500 where it was Ruby's #25 car. It was Ruby's regular car for the rest of the season but the '67 car was still available and may have been used at some races. Ruby also drove the 1968 Mongoose at the 1969 Indy 500, preferring it to the new monocoque 1969 Mongoose. He continued to use the 1968 car at most races, the '67 car being used at IRP in July, until Dover Downs in August when he crashed heavily in practice and was badly burnt. Photographs of the burnt out wreck show several features distinctive of the 1968 car. The car was not salvageable and dave Laycock told Butch Gilbert that used it as "rebar" in his patio at his home. The surviving suspension parts were used by Grant King in 1974 in the construction of a 4-wheel independent suspension sprint car.

This history is a result of the collaborative research of Allen Brown, Michael Ferner, Luis Mateus, Gerry Measures and others. Thanks also to Butch Gilbert for his account of the fate of the car.