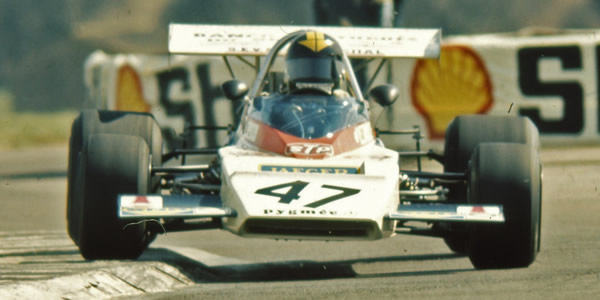 Carlos Pace uses plenty of kerb as he takes a Heat 1 lead on the Pygmée MDB17's debut at Thruxton in April 1972. Copyright Ted Walker 2012. Used with permission.

The 1972 Pygmée MDB17 was very similar to the 1971 MDB16, differing in detail only. Three cars were run as part of an ambitious Brazilian-financed English-based operation, but despite some early promise, it ended very badly.

Mike Earle had made his name as a team manager running Church Farm Racing in the late 1960s with patron Bernard 'The Colonel' Hender, driver Derek Bell, who was Hender's stepson, and ace mechanic Ray Wardell. When Bell was poached by Ferrari, Peter Gethin joined the team and Church Farm won the 1969 British Formula 5000 series. For 1972, Earle and Rodney Banting formed Banting & Earle Racing Team (BERT), doing a deal with the Pygmée team in Annecy, France, to run three new Pygmée MDB17s in the Formula 2 championship. The money for this deal was to come from Banco Português do Brasil, who were paying for drives for the highly-rated Brazilian Carlos Pace - also racing for Frank Williams in F1 - and another less well known Brazilian called Lian Duarté, who had been winning local races in a Porsche 910. Patrick Dal Bo, son of constructor Marius Dal Bo, would also drive of course.

The team's first race was at Thruxton, and Pace was a revelation, equalling the pole position time in practice for Heat 1 despite a broken spark plug cutting short his session. He took the lead on lap two of the heat and set a new lap record as he quickly established a commanding lead. Just three laps from the end of the heat, the Pygmée's engine started to misfire as it failed to pick up the last of its fuel, and he pulled up just two laps from the end. In the final, he went off onto the grass at the start, and collected Duarté, putting them both out. Dal Bo rescued the weekend with a fourth-place finish. Pace was again very fast at Hockenheim, and just as he was closing on the leader near the end of Heat 1, the Pygmée's BDA failed - the team's third engine failure of the weekend. With no time between the heats to change engine, not one MDB17 started Heat 2. Pace then had to fly home to Brazil, after the death of his father, and would not rejoin the team until July.

Dal Box qualified in an excellent fourth place at the Nürburgring at the end of April and ran in second place in the early stages before going off and badly damaging his car. Duarté damaged his car at the same race, in a first lap pile-up, incurring serious damage to the monocoque, and he was allowed to take over Pace's car. Behind the scenes, problems had already started, with disputes over the quality of the engines being rebuilt by Pygmée's engine shop in France, and also problems with the sponsorship money from Brazil. The upshot was that Pygmée reclaimed the Brazilians' two cars, and BERT continued to run one car for Dal Bo. Pace moved to the Surtees F2 team and took over John Surtees' usual Surtees TS10, which he immediately put on the front row at Enna in August and once again led until his engine failed. Later on in the year, the ex-Pace MDB17 was loaned to Jean-Louis Lafosse, but engine problems meant he could not even start.

New to the BERT team for Lian Duarté to race in the 1972 F2 series. Duarté was taken out by teammate Carlos Pace at the start of the final at Thruxton, and his race at Hockenheim ended after just a lap with a broken piston. His bad luck continued at the Nürburgring at the end of the month, then he was involved in a lap 1 pile up, and the Pygmée was badly damaged. He returned to this car at Rouen in June, but was too slow to qualify, and failed to qualify again at the Österreichring after brake problems. His luck finally turned at Imola where he qualified with a rather dubious time, and completed two whole laps before retiring with an oil leak. He was not seen again. The subsequent history of the MDB17 is unknown, but Didier Martin has been quoted that both the Duarte and Pace MDB17s went to Marc Regal. Gérard Gamand lists the car as being with Edouard Géraud (who also owned MDB16 271 and MDB17 272) in 1995, and then in a private collection in southwest France in 2010.

New to the BERT team for Carlos Pace to race in the 1972 F2 series. Pace led at Thruxton, and came close to leading at Hockenheim. Pace then returned to Brazil due to the death of his father, and his MDB17 was used by Duarte at Pau after he damaged his usual car. Pace used it again at the Österreichring but failed to qualify after engine problems. Not seen again until it was loaned to Jean-Louis Lafosse for the Albi GP, but he was unable to start either the Heat or the Final. This car was not seen in 1973 or 1974, but was acquired by Marc Regal and used in French hillclmbs in 1975. Regal continued to run the car, using a Cosworth FVA engine in the 1600cc class, to the end of 1979. The car had been fitted with MDB18 bodywork by 1978, and may have had that as early as 1975. Subsequent history unknown, but this may be one of the cars described as a "MDB20" in 1980. Didier Martin has commented that this car was the one raced by Henri Neel in the 1980s. Gérard Gamand lists the car as being with Edouard Géraud in 1998. Géraud sold chassis 2 to Pierre Lees in early 2006, and by 2007, the car was restored and was near Paris. Gamand's book in 2010 said it was in the Collection Pierre Lees. At HTT Motorsport in January 2017. In October 2018, Gérard reports that the owner is now Franck Vaudoit.

New to the BERT team for Patrick Dal Bo to race in the 1972 F2 series. Dal Bo was fourth in the first race of the season, but had a series of failures to qualify, often caused by engine failures. The car was sold to Georges Schäfer for 1973, and used in occasional F2 races, rounds of the Swiss championship, and French hillclimbs for the next three seasons, using a Cosworth BDE engine. It appears that it was updated for 1974 with revised bodywork and given the chassis plate "MDB19 - 03 -74". Gérard Gamand's book shows this as the Pygmée owned by Roger Martini (Girond, Aquitaine) from 1979 to 1983, although Martini believed he had owned the ex-Pace car. According to Gamand, the car then passed via two other French owners, 'Legeay' and 'Sutter' to Roland Perrin in 1988, by which time it had acquired odd square sidepods and a Martini nose, and the steelwork had been painted a fetching orange. Bought by Peter Morley in Belgium in 2005, then to Gamand in April 2007, who completely restored the car in 2008-09. On display at Epoqu'auto in Lyon in November 2009. Raced by Gamand in Historic F2 in 2010 and 2012. On display on the Autodiva stand at Epoqu'Auto in November 2013. In October 2018, the car was being prepared by HTT Motorsport and was raced by Gamand in Historic F2 in 2019. Raced by Gamand at Le Castellet in June 2021.

New to Fred Stalder, and raced in selected rounds of the 1972 F2 series and some French hillclimbs. He started the season with a Cosworth FVA, but was not allowed to run that at Pau. He replaced this with a Cosworth BDE later in the season. Subsequent history unknown.

The fate of the MDB17s

Of the four MDB17s, only one was seen in 1973: the ex-Dal Bo car in the hands of the perennially under-financed Georges Schäfer. The factory produced new MDB18s for Migault and Patrick Dal Bo to race in F2 in 1973, using chassis and suspension identical to the MDB17 but with new Alpine-inspired bodywork drawn up by Dal Bo, and also produced a new lightweight MDB18L for Denis Rua to use in hillclimbs. The remaining two works MDB17s later went to Marc Regal, and he used one of those in hillclimbs with MDB18 bodywork in 1975.

In 1979, Georges Bastit drove a Pygmée in the 1600cc class of French hillclimbs. His car was twice identified as a Pygmee MDB17. He raced in the Midi-Pyrénées and Languedoc-Roussillon regions (now both Occitanie) in the south-west of France. Nothing more known.

In addition to the above, an unknown Pygmée MDB17 was driven by Martel.

Much of the material in these histories is from period reports, Autosport, Motoring News and Sport Auto for Formula 2, and Echappement for courses de côte. However, a huge amount of research has been done on this subject by Didier Martin and Gérard Gamand, and a large part of what is known about the cars, and subsequent histories of each car, comes from their books on Pygmée. Didier's book Les Monoplaces Pygmée was published by Editions du Palmier in October 2002, and Gérard's Pygmée 1965-1973 was published by Autodiva in 2009. Both are highly recommended. Both Didier and Gérard post regularly on Gérard's Autodiva forum, where a very active thread on the subject of Pygmée is another regular source of new information.