Max Stewart in the Rennmax-built Mildren-Waggott at Warwick Farm in 1970. Copyright oldracephotos.com/Peter Schell. Used with permission.

In 1968 and 1969, Bob Britton built a series of cars based on the design of the Brabham BT23. The first were for the Rorstan and Mildren teams, and were named after their new owners, but later cars were raced as Rennmax BN3s.

In 1968, Denny Hulme entered the ex-Winkelmann/Rindt F2 Brabham BT23 [5] in the 1968 Tasman series. At the very first race, Pukekohe's NZ GP, he crashed the car heavily and the wreck was acquired by Feo Stanton and Ian Rorison of Rorstan Racing. They sent it to Bob Britton but, instead of repairing it, Britton built a jig and sent a new frame back to Rorstan. This car was built up with a 2.5-litre Climax FPF as the Rorstan Mk 1. The old wrecked BT23 frame went on the roof of Britton's workshop, but that's another story.

After the Rorstan and a car built for Alec Mildren's team which was always known as the Mildren, it would appear that five more cars were built with the name Rennmax, mostly in 1969 but with one straggler appearing at the start of 1971. A further car was later completed using a spare frame that had been built for Mildren. The Rorstan was later wrecked, but the Mildren and all the other six are known to still exist.

Arguably the Jane-Repco could also be included here, as that was built by Bob Jane's team in early 1970 using a BT23-type frame supplied by Bob Britton. 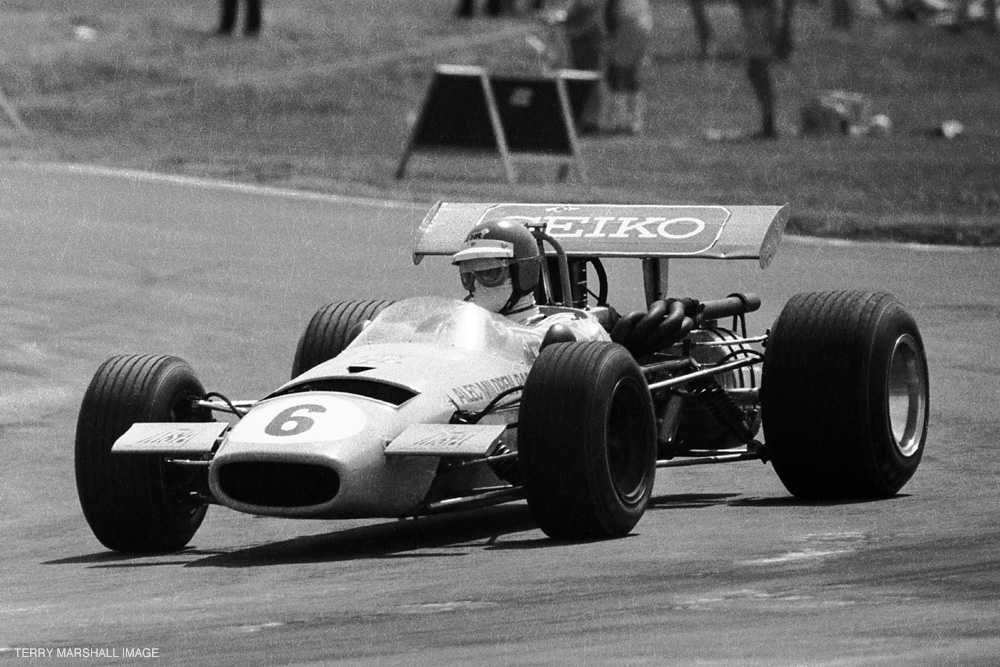 New to the Alec Mildren team: fitted with 1.6-litre four-valve Alfa engine and driven by Max Stewart Tasman 1969. Then Stewart in 1969 Gold Star with the new 1600cc Waggott 4-valve engine; Stewart Australian Tasman races 1970 with Waggott. Fitted with a 1900cc version of the Waggott engine later in 1969, and raced by Stewart with 1.9-litre and 2-litre versions in this in Australian Gold Star 1970, Australian Tasman races 1971, and early-1971 Gold Star races. Also raced twice at Macau by Kevin Bartlett, winning in 1969. Taken over by Max Stewart Racing later in 1971, and raced by Stewart in the 1971 Gold Star and by Tony Stewart in the 1972 Internationals. Then fitted with a Paul England twin cam for Southeast Asia races in 1972, then the 2-litre Waggott for Max Stewart at the Japanese GP, after which it driven by Alan Grice in the 1972 Gold Star as a F2 car using the England twin cam again. Last seen when raced as a Rennmax by Stewart in the Malaysian and Singapore Grands Prix in April 1973.

Sold to Ken Shirvington (NSW) for 1974, and raced, again as "Rennmax", in Australian Formula 2 that year. Sold in 1981 to Greg Smith (Elwood, Victoria), complete with BRM twin cam. Restored by Smith with a 1860cc Waggott engine. Subsequently sold some time before 2008 to Max Pearson (Queensland, Australia). Retained by Pearson until 2022, when it was sold to Stewart Corner.

The remains of the car were later sold to Alan Hamilton for the Porsche engine, and the rest of the car was sold to Denis Lupton, who wanted the remaining Brabham BT23 components. What was left passed to Syd Fisher, who started to restore the car to the original Rorstan-Climax specification, but his workshop was destroyed by a fire started by a neighbour's incinerator, and all that was left of the Rorstan was destroyed.. 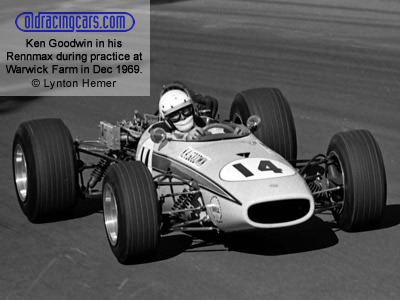 Ken Goodwin in his Rennmax during practice at Warwick Farm in Dec 1969. Copyright Lynton Hemer 2020. Used with permission.

Ken Goodwin: and built and utilising Palliser wheels and uprights. First recorded outing Warwick Farm 13 Jul 1969; initially 997cc Ford, then next time with a 1600cc twin cam; Australian Gold Star 1970 (raced at Oran Park 28 Jun 1970 with a Cosworth FVA (?) and at the Sam Hordern Trophy at Warwick Farm on 6 Sep 1970 with a 1500cc Ford); Singapore GP 12 Apr 1971 (twin-cam 1600cc). Then entered by Goodwin for Bob Muir Gold Star 1971 with a 2-litre Waggott engine. Then rebuilt with a Ford twin cam and raced by Goodwin at the Sam Hordern Trophy at Warwick Farm 5 Sep 1971, then by Muir in the 1972 Singapore GP and in the 1972 Repco Birthday Series. Then sold to Terry Hook, and raced in the Australian F2 series in 1973 and 1974. The number '169' may have been invented by Barry Lake around this time to identify the car. This car ended up with Ray Hanger and was sold by him to Vaughan Stibbard some time in the mid 1990s. Retained May 2012. 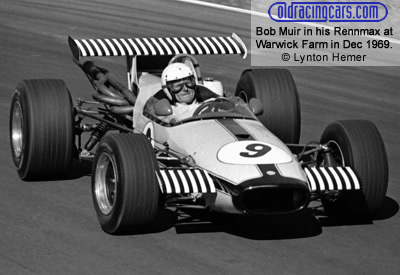 Bob Muir in his Rennmax during practice at Warwick Farm in Dec 1969. Copyright Lynton Hemer 2020. Used with permission.

Geoff Anderson in his Rennmax during practice at Warwick Farm on 2 May 1970. Copyright Lynton Hemer 2019. Used with permission.

Geoff Anderson (Brisbane, Queensland): delivered 28 June 1969. Completed by Anderson with a 1600cc twin cam and utilising Palliser wheels and uprights. Said to have been a 1968 chassis but not raced until the Surfers Paradise Tasman race 8 Feb 1970 (but not mentioned in results). Australian Gold Star 1970 (first recorded outing Warwick Farm 3 May 1970; noted as Yellow). Also raced at Lakeside 7 Jun 1970. Advertised by Anderson in July 1971 as a 1970 Rennmax BN2, which had only appeared at 8 meetings. To Ross Switzer (Queensland, Australia) circa 1972 then via David Goode (as agent) to Paul Raper, then to John Allison Nov 1983. Sold to from Tony Dickins (Sydney, Australia), and then to Will Meddick in 1989. Meddick emigrated to the UK shortly afterwards, and took the car with him. Still with Meddick in England in September 2012. 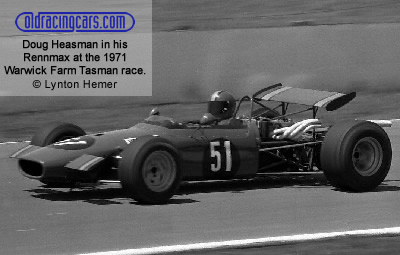 After Allison's death while driving 'the Mildren-Baker car', this still unrepaired ex-Heasman car was acquired by Laurie Knight (Wagga, Australia) and Gary Neilsen (Victoria) and rebuilt using a new chassis using Bob Britton's original chassis jig. The original bent chassis was given to Britton in exchange for the loan. Neilsen completed the restoration in 1988 in time for Historic 88 at Oran Park, and then campaigned successfully for the next 12 years. Still with Neilsen in November 2014.

Bob Britton built up a spare frame for Alec Mildren in 1968. It remained unused, and was acquired by Don Baker who fitted it with some Palliser suspension components. The car was finished but still did not have an engine fitted when it was sold to Bob Johns in 1971. Johns also did not use it, and sold it to his brother Rod Johns in 1972. Then sold to David Booth and fitted with a 1300cc Toyota Corolla engine for Australian F3 in 1974. Sold to Mal Brewster 1975, then to Craig Gibbs 1976, to Keith McDermott 1982, and then to John Allison in 1984. Allison crashed the car at Amaroo Park and died as a result of his injuries. The car then was purchased by Laurie Knight (Wagga, Australia) in 1990, and he and Gary Neilsen (Victoria) rebuilt the car to its original Palliser specifications. Sold to Chad Wheeler (Ipswich, Queensland) 2000, and raced in Australian historics from 2003 to 2006. Advertised on various occasions over the next ten years, and sold early 2017 to Ian Gray (Brisbane). Bought from Gray by Wayne Seabrook (Sydney) in 2018. 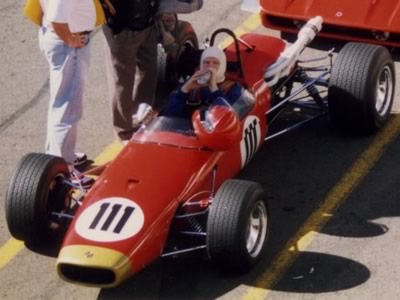 Wayne Wilson in his ex-Gordon Crawford Rennmax in the pitlane at Eastern Creek. Copyright Geof Russell 2008. Used with permission.

Gordon Crawford (Australia): sold by Rennmax 20 Jul 1969 as "Brabham type racing car". Carries frame no BF151. Period CAMS logbookwas issued with the car describes the car as a "Brabham BT23C" and car is same chassis spec as Heasman, Muir and Goodwin cars. Fitted with 1600cc pushrod Ford engine. By 1978 with a Russell Green - Alan Tucker (maybe in partnership with Reg Darwell) - Bruce Kennedy 14 Sep 1993 - Wayne Wilson 3 Jun 1996. Raced by Wilson as a "BN2" in Australian historic events from 1999 (Winton 30 May 1999) onwards. Raced in the Phillip Island Classic in March 2008. Sold in 2013 to Ryan Sorensen (Sydney) and raced for the first time at the Sydney Retro Speedfest in May 2014.

Lloyd Cleaver also owns a car that appears to have a Rennmax chassis, but its full history is not yet known. Bryan Miller adds that Ian Cook (the one that lived in NSW, not the one from Victoria who died) and Bob Vickers built up a car on a spare Mildren-Rennmax chassis, fitted a 1300cc Fiat 128 engine for Australian Formula 3, and called it the Squire CV3. Vickers (Sydney) advertised this car in February 1974, noting that it was a Rennmax BN3 chassis modified and updated by Cook.

Thanks to Ray Bell, Bryan Miller, Gary Neilsen, Matt Ruggles, Vaughan Stibbard and others for their help constructing these histories, and to Lynton Hemer for contributing his excellent pictures. All and any help would be gratefully received.