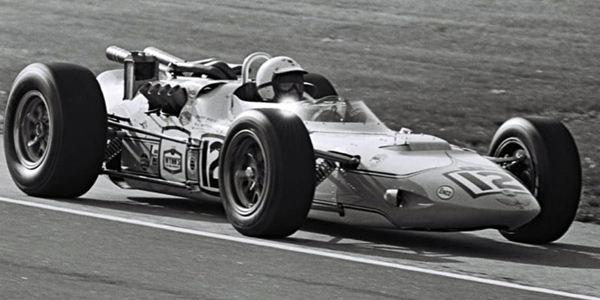 Chuck Hulse in the 1966 Watson at the 1966 Indianapolis 500. Part of the Dave Friedman collection. Licenced by The Henry Ford under Creative Commons licence Attribution-NonCommercial-NoDerivs 2.0 Generic. Original image has been cropped.

The 1966 Watson shared the pointed nose of the 1965 car but had changed from inboard to outboard front springs. Two were built for the Indy 500, with a third being built later in the season.

After the disappointment of 1965, the Leader Card Racers team bought a pair of new Gerhardts for Don Branson to use in 1966 and AJ Watson built a pair of new cars for Johnny Rutherford who had taken the place of the departed Rodger Ward. Chuck Hulse would later take the place of Rutherford in the 1966 Watson after the latter was injured in a sprint car accident. Watson's new Indy design had bodywork very similar to the unloved 1965 car, and was again a monocoque but the main change was from the rocker-arm suspension with inboard springs on the 1965 car to outboard springs on the 1966 car. Despite the success of the rocker-arm Lotus 34, it was the Brabham-based Brawner-Hawk that had won the 1965 national championship and its outboard suspension was held as responsible for its better handling.

With the sale of one 1965 car to Walt Flynn and the destruction of the other in Chuck Rodee's accident at Indy in 1966, the team were down to just the two 1966 Watsons for the rest of the 1966 season. Hulse raced the #12 car at the Indy 500 and in the next few races, but then transferred to the #86 car which had been fitted with an Offy engine instead of the V8 Ford. Bobby Unser joined to drive the #86 Watson-Offy but transferred into the second Gerhardt later in the season. Hulse damaged the #12 at Milwaukee in August, so Watson built a third 1966 car which made its first appearance at the Phoenix race in November 1966, where it was assigned to Hulse. This unfortunate car repeatedly non-started, ending its life during practice at the 1967 Indy 500 without ever having completed a race lap. 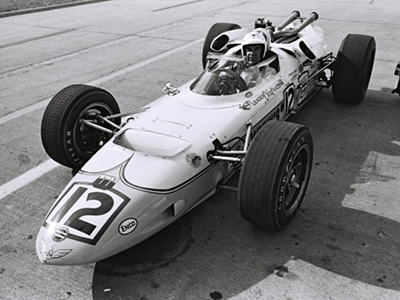 Chuck Hulse in the 1966 Watson at the 1966 Indianapolis 500. Part of the Dave Friedman collection. Licenced by The Henry Ford under Creative Commons licence Attribution-NonCommercial-NoDerivs 2.0 Generic. Original image has been cropped.

Built new by AJ Watson and intended for Johnny Rutherford in 1966 as part of the Leader Card team as the #12 entry. Rutherford broke both arms in a sprint car accident prior to the Indy 500 and Chuck Hulse took over the new car. Driven by Hulse later in the season but a new car was built for Hulse to drive at Phoenix in November, and the old #12 car was not seen again. Subsequent history unknown.

Built new by AJ Watson for 1966 for the Leader Card team and entered as the #86 backup car at the Indy 500. Fitted with an Offenhauser engine and driven later in the season by Sammy Sessions and Bobby Unser, and finally by Hulse at Trenton in September. The two monocoque 1966 cars were rebuilt with new bodywork for early 1967. Only the newer car - the former #12 first seen at Phoenix in November 1966 - was used by new team driver Mike Mosley in the opening races of the season, and the former #86 car was not seen again. 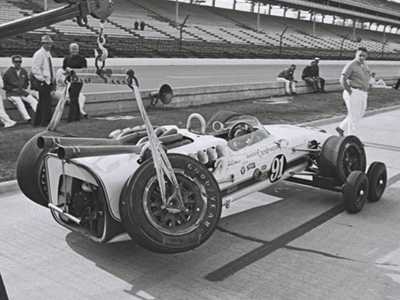 Mike Mosley had two accidents in 1966 Watsons during practice for the 1967 Indy 500, so it seems apt to illustrate this model hanging from a tow hook. Part of the Dave Friedman collection. Licenced by The Henry Ford under Creative Commons licence Attribution-NonCommercial-NoDerivs 2.0 Generic. Original image has been cropped.

AJ Watson built a new Indycar in the fall of 1966, and it was driven by Chuck Hulse as the team's #12 entry at Phoenix in November 1966, but was damaged in practice and Hulse did not start. Watson updated his two 1966 cars with new bodywork for 1967, and the #12 became the #91 car. New driver Mike Mosley was allocated the car at Phoenix in April, but spun and broke a hub, missing the race. He was also out of luck at Trenton in April, as fuel feed problems left him unable to start. Then in practice at the Speedway he crashed on 7 May, damaging the #91 car. The Daily Track Report said it needed "several days' repair" but the #91 ran the very next day and continued to run regularly over the next ten days, matching the 160 mph speed of teammate Pedro Rodriguez in the #90 car. On Friday 19 May, just a day before its scheduled qualifying run, Mosley crashed the car again, losing control coming out of turn 3 and hitting the wall. This time the car was badly damaged and said to be "out of contention for this year's race". One 1966 Watson was used at a few races later in the season, but it is unclear which one was used.

Branson's death in another sprint car accident in November left Unser as leader of Jud Phillips' half of the Leader Card Racers team, and Bob Wilke deepened the division in his team by buying a new Eagle for Unser to join the Gerhardt for 1967, while AJ Watson announced that he was building a new tube-frame car for 1967 while also rebuilding the two 1966 cars. Both of the 1966 cars were rebuilt with new bodywork for 1967 and press photographs show the two monocoque cars wearing 90 and 91 in preparation for the new season. Watson had his new spaceframe 1967 for Pedro Rodriguez as the #90 entry at the Indy 500, but Mike Mosley was entrusted with the late-1966 car wearing #91. Mosley had two big accidents during practice and it is possible that after wrecking one of the 1966 cars, the Leader Card team brought out the second one to take its place. Mosley then crashed a second time, this time doing even more damage, so may have damaged both remaining 1966 cars. One did survive, as photographs show that a 1966 car was used at Langhorne, Trenton and Hanford later in the season.

AJ Watson rebuilt two of his 1966 Watsons for the 1967 season. Newspaper reports make clear that the #91 car used by Mike Mosley in practice at the 1967 Indy 500 was the car built new for Phoenix in 1966, but the identity of the other car is less clear cut. After the 500, new driver Jim Hurtubise used the new 1967 car at most races, but used the team's surviving 1966 car at Langhorne in July, at Trenton in September and at Hanford in October. Subsequent history unknown.

It has been suggested that AJ Watson's 1968 Indy car was one of the old 1966 cars rebuilt. Given the abject lack of success of the 1966 cars, coupled with the far greater fuel loads needed by 1968, it seems highly unlikely the surviving one or two 1966 cars were reused. But if they weren't, where have they gone? Of the four rear-engined Watsons that preceded them, one was destroyed, two were sold and the fourth was preserved in the rafters of AJ Watson's shop. The 1967 and 1969 cars have also survived, so the 1966 cars are probably out there somewhere. If you have any clues, please email Allen at allen@oldracingcars.com.

My thanks to Simmo Iskül and our good friend 'Matt' for their hard work and remarkable eye for detail working through photographs and other evidence to untangle the histories of these cars.