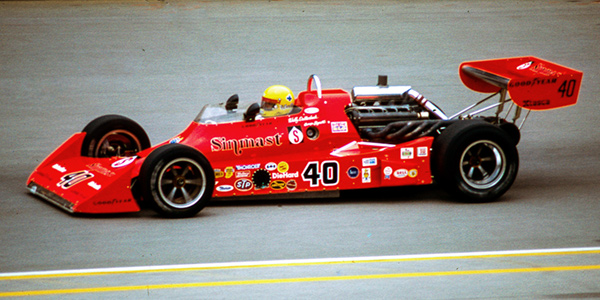 Wally Dallenbach in his Wildcat Mk 2 at Michigan in 1976. Copyright Richard Deming 2016. Used with permission.

The new car was unveiled in mid-February, in plenty of time for the opening race at Phoenix a month later. The Wildcat II had the main radiators moved from behind the front wheels, as on the Eagle, into a new full-width nose, similar to Riley's earlier Coyote design. This allowed the car a more slender shape, Bignotti's response to USAC decision to reduce maximum turbocharging boost on the Offy engine from 80 to 75 inches of manifold pressure. The tub was 12 inches narrower in the cockpit area, and the cowl behind the driver was smaller, but Bignotti was not interested in wind tunnel testing as he believed the results were misleading. The rear suspension was also modified. Further changes to the Drake Engineering DGS engine involved a new block casting and a reduced valve angle, from 22° to 19°. Aj Foyt was quick to draw attention to the similarities between the Riley-designed Coyote and the Riley-designed Wildcat, and relationships soured between Foyt and Bignotti during 1976 as Foyt pushed for a pop-off valve to limit boost to the Offy engine and retain the power advantage of his own Ford-designed V8 engine.

The 1976 season was highly competitive, with five different marques and six different drivers winning races. George Bignotti's preparation was as excellent as ever, and Johncock finished in the top three in eleven of the 13 races, retiring only once, and winning the USAC championship by the narrowest of margins from Johnny Rutherford's McLaren. Foyt was often quicker, taking pole position seven times, but retired too often to be in contention for the championship.

If you can add to our understanding of these cars, know where either surviving car is today, or have photographs that we can use, please email Allen at allen@oldracingcars.com. 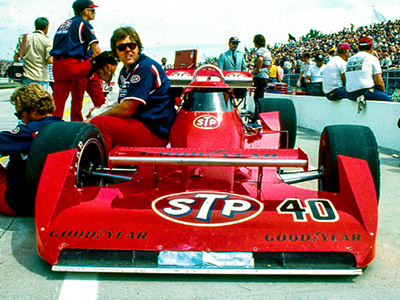 Wally Dallenbach had a Wildcat Mk 2 for the 1976 season but we cannot be certain when he drove the Mk 2 that season and when he may have used an older Mk 1. The Mk 3s were produced for 1977 but were only used at a handful of races and Dallenbach drove his 1976 Mk 2 at most races. At the end of 1977, the Dallenbach Mk 2 was sold to Sherman Armstrong's Armstrong Mould team and driven by Tom Bigelow through the 1978 season. It was loaned back to Patrick Racing for Steve Krisiloff to drive at Trenton in September after his usual Mk 2 had been wrecked at Ontario three weeks earlier and the alternative Mk 4 had been shipped to England for the two British races. Retained by Armstrong and driven by Gary Bettenhausen and Howdy Holmes in 1979 and by Bettenhausen in 1980. Used briefly by Rich Vogler as an Armstrong Mould entry in Indy 500 practice in 1981. Subsequent history unknown 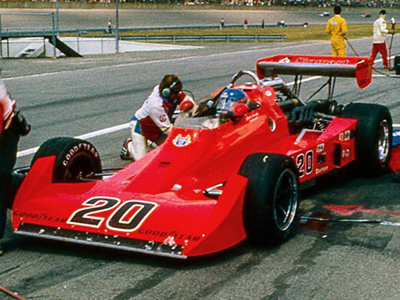 Gordon Johncock in his Wildcat Mk 2 at Michigan in 1976. Copyright Richard Deming 2016. Used with permission.

New for Gordon Johncock in 1976 as Patrick Racing's #20 Sinmast Goodyear entry, but Johncock also had a 1975 Mk 1 for short track events, and exactly where he used the Mk 2 is not yet fully resolved. This car was retained for 1977, becoming Johncock's short track car, and was also raced by Johnny Parsons Jr at the 1977 Indy 500 as Patrick's #60 entry. The car was wrecked by Johncock at Milwaukee in June 1977 and was not seen again. As the team had to borrow a Mk 2 back from another team during 1978, it can be assumed that this car was not rebuilt.

Built by Patrick Racing during 1976, but not run for the first time until the 1977 Indy 500, where it was Gordon Johncock's #20 STP entry. It is believed to have been his regular long-track car in 1977, but he also had his 1976 Mk 2 for short tracks early in the season, and had a Mk 3 which was used at Mosport and at least one short track later in the season. This car became Steve Krisiloff's #40 Foreman Industries car in 1978 until he wrecked it at Ontario in September, in a collision with Cliff Hucul's older Wildcat sent Krisiloff into the wall. Krisiloff had to use the unloved Drake V8-powered Mk 4 for the rest of the season, indicating that Patrick Racing had no Mk 2s left and that this car was not rebuilt.

Another new Mk 2 was built for Gordon Johncock to use in 1978 and he used this car throughout the 1978 season, the Mk 3 and Mk 4 having been effectively abandoned. Sold to Herb & Rose Wysard for 1979 and became their #34 Wysard Motors entry for Vern Schuppan. Retained for 1980 and raced by Pete Halsmer and Schuppan up to Watkins Glen in August, after which it was sold to Larry Cannon to replace his Mk 1. Probably the car raced by Cannon in the last few races of 1980 and then entered for Dick Ferguson and Herm Johnson in early 1981. Both Cannon's Wildcats were later bought by Maurice Kraines of Kraco and used as display cars at store openings and malls. Subsequent history unknown.

My thanks to Michael Ferner, Simmo Iskül and 'Matt' for their hard work and remarkable eye for detail working through photographs and other evidence to untangle the histories of these cars. The detailed description of the cars is from the Indianapolis Star 18 Feb 1976 p40.

If you can add to our understanding of these cars, know where either surviving car is today, or have photographs that we can use, please email Allen at allen@oldracingcars.com.