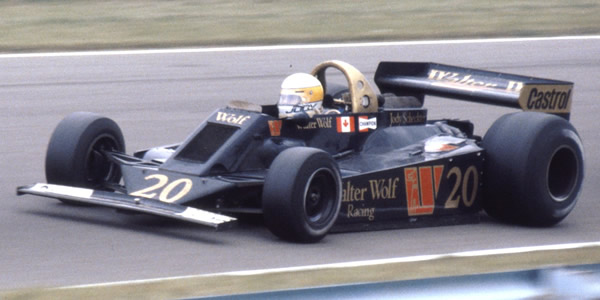 The second Wolf F1 design, the 1978 Wolf WR5, was a wing car following the ideas of the Lotus 78. The appearance of the Lotus 79 immediately demonstrated that the team had taken a wrong turn.

During 1977, Wolf had been highly competitive with the WR1-WR4 range of cars, but Jody Scheckter was completely off the pace at the start of 1978, and designer Harvey Postlethwaite rushed back from the Brazilian Grand Prix to start work on a new car. Mario Andretti led the championship at this early stage, and his Lotus 78 "wing car" would be Postlethwaite's inspiration. The WR5 had wide sidepods containing inverted wing sections, and an "up and over" exhaust system to streamline the airflow under the car. However, instead of the nose-mounted radiator of the 78, Postlethwaite wanted to use the full-width front aerofoil used on the Ferrari 312T3, so moved the radiator to sit on the scuttle further up the nose, with heat shielding to protect the driver's legs.

The car first appeared at the Monaco GP, but its first race came two weeks later in Belgium, where Scheckter qualified fifth and ran in third place before a pit stop for a new nose cone. He was fourth in the Spanish GP but a long way behind the dominant new Lotus 79s, which had taken ground effect to a completely new level. Scheckter was generally able to qualify in the top six but lacked the aerodynamics of the Lotuses, and the power of the 12-cylinder Ferraris and Brabham-Alfas. At the British GP he qualified third behind the Lotus 79s, and led the race after they both retired, only for to lose fourth gear, and then the lead. Scheckter was second in Germany, but then had a sequence of bad results before recovering his form to take third place at Watkins Glen, and then very nearly take pole position at Montreal, pipped at the last moment by a flyer from Jean-Pierre Jarier's Lotus 79. Scheckter inherited second place in the race after the unfortunate Frenchman retired, and jumped to seventh in the final championship standings, with Wolf ending the season fifth.

Postlethwaite was unlucky that he was rushed into building a new car before the secret of the Lotus 79 was discovered.  Thanks to Peter Wright's wing tunnel discoveries, the 79 employed a venturi effect to generate downforce, instead of the inverted aerofoil section used on the 78.  The designers who copied the ideas of the 78, Tony Southgate at Shadow and Arrows, Postlethwaite at Wolf, and the utterly belated Ralph Bellamy at Fittipaldi, had backed the wrong horse.  Postlethwaite would start from scratch with the Wolf WR7 for 1979.

Two cars had been built, WR5 and WR6, and the latter was loaned to Theodore Racing in 1979 for their British F1 campaign. It was then sold to Ray Mallock in 1980 to replace his Surtees TS20S. Mallock sold WR6 to the US in 1982 and has been active in US vintage racing ever since. The other car, WR5, was repaired after Bobby Rahal's crash in practice at the Canadian GP and became a show car for many years.