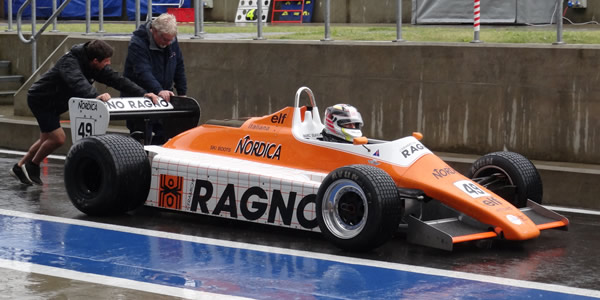 Historic motor racing is pure glamour. Neil Glover is pushed down the Wing pit road after practice for the 2015 Silverstone Classic in his A5-specification Arrows. Copyright Keith Lewcock 2015. Used with permission.

The Arrows A5 was only ever intended as an interim model between the uncompetitive A4 and the definitive model intended for a turbocharged engine in 1983.  The car was so similar to the Williams FW08, that Giorgio Piola's description of the car in Grand Prix International had to highlight the position of the anti-roll bar as the only difference.  The A5 had the FW08's pull-rod front suspension, replacing the rocker arms used by every previous Arrows.  Marc Surer drove the car on its debut at Dijon and qualified in 14th, running as high as 11th before a lengthy pitstop for a replacement skirt dropped him to the back of the field.  Mauro Baldi, who had failed to qualify his A4 at Dijon, was given the A5 for the Italian GP and qualified on the penultimate row before finishing last.  Surer was back in the seat at Caesars Palace, and qualified 19th.  His race was troubled by a serious vibration, but as the cars ahead of retired, he brought the A5's brief career to an end with a seventh placed finish.  Surer was encouraged by the A5 and decided to stay with Arrows, his long connections with BMW being thought to give Arrows a chance of securing BMW's turbo engines for 1983.  It was not to be, and Arrows would use Cosworth DFV engine again in the flat-bottomed 1983 A6.  The sole A5 was rebuilt as an A6, and its history is continued there, but during its long later career in historic racing, it was rebuilt back to A5 specification.