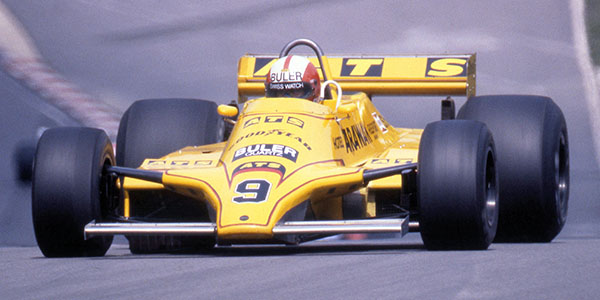 Like many early 1980 cars, the ATS D4 looked very much like a Williams FW07. Gustav Brunner and Tim Wardrup were credited with the design, which was lighter, shorter and narrower than the ATS D3.

ATS had a free-wheeling attitude to type numbers, and had started 1980 with a pair of cars, one of which was new, which they described as being D4s. The first of these was a modified version of the D3 introduced the previous autumn, and the second was its brand new twin. These were used in South America and most publications called them D3s, but it appears that the team were calling them D4s. However, ATS then introduced a new model at the South African GP which was also called the D4. This new car was described as being outwardly similar to previous ATSs, but with a completely new monocoque. It was three inches shorter and the front track was 1½ inches narrower, but the suspension design was unchanged. So we must really regard the two cars used in South America as updated D3s, and the South African GP car as the first D4. Unfortunately, the new car did not last long; new driver Marc Surer was trying really hard in the first practice session, vigorously pumping the D4's fading brakes, when his foot slipped off the brake pedal, and the car ploughed into the bank. The front of the D4 folded up and it took 45 minutes to extract Surer, who had badly broken ankles.

Jan Lammers was brought in to replace Surer, and he had a new D4 for Long Beach which had revised skirts and sidepods. The young Dutchman astonished everyone by putting the car on the second row of the grid, only for a driveshaft to fail after a single lap. A third D4, further modified and lighter, was ready for the Monaco GP, but Lammers qualified the older car. After losing a number of laps in the pits, he drove a gritty race, overtaking one of the Ferraris at one stage. Using the lighter D4/03, he set ninth fastest time in practice for the Spanish GP, and ran in sixth place before the inevitable retirement. Surer then returned and took over D4/03, generally qualifying somewhere between 11th and 17th, but his races were never untroubled and finishes were rare. After receiving concussion when he wrote off D4/02 in a testing accident at Silverstone in August, Surer seemed to lose his way, and qualified ever further back, failing to make the grid at all in Canada. The team's highly regarded designer, Gustav Brunner, quit the team during the season after an argument with team owner Günter Schmid.

The two surviving D4s were reworked by new designer Hervé Guilpin over the winter, and were driven by the returning Lammers in the opening races of 1981 until the new ATS D5 made its first appearance at the Belgian GP. Due to ATS's numbering system, the chassis plates used by ATS on these cars are likely to have been offset offset by two from the numbers used here, so D4/01 would have been plated "D4/03" and so on.

One of the ATS D4s was on display at the ATS factory at Bad Dürkheim for many years.  Although recognisably a D4, it had been repainted in the livery used by the team in early 1982, presumably for use as a show car.  It was one of six ATSs retained for display at the factory, and was sold to France in 2014, then to Belgium, where its new owner had it prepared for historic racing.  Its chassis plate is "D4-06", indicating that it is the car shown above as D4/04.  In May 2018, Martin O'Connell win the Serie G race at the Grand Prix de Monaco Historique in this car.