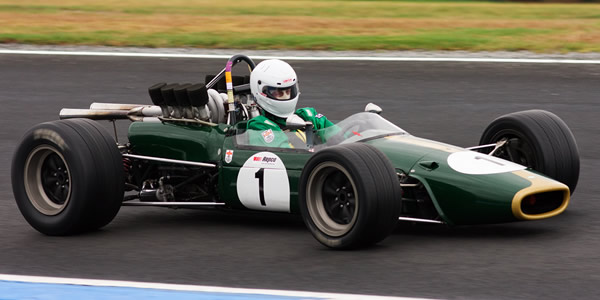 Ron Tauranac's new chassis design was a little narrower than the preceding Brabham BT20, the fuel tanks being packaged inside the round-section steel tube spaceframe, and the whole design was lightened and cleaned up. The cars were fitted with the Repco Type 740 V8 engines, and Hewland's DG gearbox, although an FT200 was tried at first. The same relatively long wheelbase was used as on the BT20, but the track was slightly narrower at the front and slightly wider at the rear. Suspension was much the same as the BT20, but there were new cast front uprights. MRD abandoned the old Cooper-style numbering system for 1967, and the two cars were numbered BT24/1 and BT24/2. As the BT20s were doing so well, neither Jack Brabham nor Denny Hulme were in a great hurry for their BT24s, and BT24/1 did not appear until Zandvoort on 4 June 1967, a race now rather more famous for the first outing of the Lotus 49 and its Cosworth DFV. Jack Brabham preferred to race his 1966 Brabham BT19 on that occasion. Hulme's BT24/2 was ready in time for the French GP, and the Brabham team demonstrated their dominance by finishing 1-2 in the BT24s, with Hulme second behind his boss. They were beaten by Jim Clark's Lotus 49 at the British GP, but were 1-2 again at the German GP, this time with Hulme the winner, and at the Canadian GP, where the order was reversed. Hulme had already won the Monaco GP earlier in the season in his BT20, so now led the championship by nine points from his teammate, with Clark a long way behind the pair. Although the Lotus driver dominated the rest of the season, Hulme's two third-place finishes were enough to clinch the title.

The Brabham team were never burdened by sentimentality, and as soon as the 1968 Brabham BT26s were ready, both BT24s were sold off early in 1968 to South African drivers. This turned out to be slightly premature, as the second BT26 was not yet ready for new driver Jochen Rindt, so a third BT24 was built from spares. This car was sold to Silvio Moser for 1969 and has remained in his family's possession ever since. Meanwhile in South Africa, Sam Tingle raced BT24/2 until he crashed it at the beginning of 1970, after which the car sat in a museum at Heidelburg until the 1990s. The sister car, BT24/1, continued to be raced into 1970, after which it was stored until it was restored in the 1980s and used in South African historic racing in the early 1990s. Both cars moved to the UK in the mid-1990s; one has become a regular competitor in historic racing, and the other spent much of its time in the Donington Museum with occasional visits to the Goodwood Festival of Speed.

In the 1980s, a BT24 was built in Switzerland that appears to have been put together using a Formula 2 BT23 chassis. This was sold, as the ex-Silvio Moser BT24/3, to an American in 1989, with the vendor claiming to have bought it from Moser's estate. Representatives of Moser's family quickly put the record straight. The car is now accepted as a BT24 replica and currently races in UK historic racing.