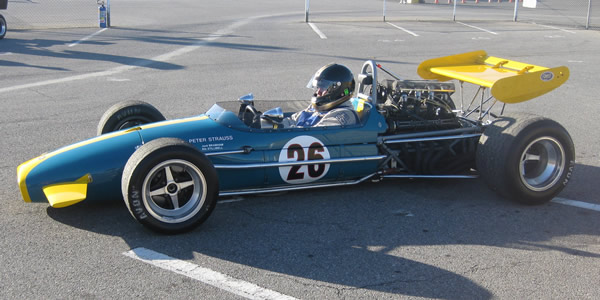 The Brabham BT31 was a slimline Tasman car, based on the Brabham BT28 Formula 3 chassis. It only raced twice, Jack Brabham finishing third in the Sandown Park Tasman race in March 1969, and then winning a Gold Star race at Bathurst.

The BT31 was one of series of related designs, including the BT28 for Formula 3, the BT29 for Formula B, and the BT30 for Formula 2. The BT31 was built for the 1969 Tasman series, and was fitted with a Repco 830 V8 engine, as used on the previous year's Brabham BT23E, and a Hewland FT200 gearbox in place of the DG300 used in Brabham's F1 cars. The engine used the 30-series crossflow head with single cam per bank, on the short 800 series block. The installation of the engine was very tidily done, but required detachable top rails in the engine bay to allow the engine to be removed. The chassis was a spaceframe, as nearly all Brabhams were, and had a riveted alloy floor to improve stiffness. However, it did not have the "semi-monocoque" panelling seen on the 1968 BT26 Formula 1 car. The fuel tanks were moulded tightly to the sides of the frame. The BT31 was very small by normal Tasman standards, but in other respects was similar in layout to the BT23E. One change was to the front suspension, where the front bottom trailing arm had been replaced with a more conventional lower wishbone.

Jack Brabham did not intend to do the whole Tasman series, but the car arrived so late that it only appeared at one race, the Sandown Park Cup on 16 February. Brabham placed the car fifth on the grid, behind Graham Hill and Jochen Rindt in the works Lotus 49Bs, Chris Amon's Ferrari Dino, and the surprise package of Piers Courage in Frank Williams' 1967 ex-F1 Brabham BT24. He got ahead of Courage at the start, and after Hill dropped out, the Australian finished third behind Amon and Rindt. Brabham flew back to Australia over the Easter weekend and made an unexpected entry for the Gold Star race at Bathurst. He had problems in practice, and nearly failed to start the race when the engine would not start, but when he finally got going he broke the lap record on his way to an easy victory. With Brabham returning to Europe for the F1 season, that would be the last time the car was raced.

New for Jack Brabham for the 1969 Tasman series but only appeared for the last race. Used also to win one Gold Star race but then remained with Repco in Australia as a show car. To Repco employee Rodway Wolfe in 1974 and sold to collector Dr Bill Marshall in 1984. To Bib Stillwell in 1987 to join his collection of cars. Sold in January 2000 to Jeremy Thomas (Hundon, Suffolk). To Peter McLaughlin (Hannover, NH) July 2006. To Peter Strauss (Melbourne, Victoria, Australia) January 2011 and used in Australian historic racing.

In 2017, this car appeared in historic racing in Australia rebuilt with a 3-litre engine and repainted in F1 colours, and a story appeared in an Australian publication stating that the car had originally been built as a F1 car, and was eligible to appear in historic racing as a F1 car. This story is completely at odds with all contemporary reviews of the BT31. In particular, the BT31's 30-series engine, when the F1 cars had used the quad-cam 60-series engines in 1968, its very small fuel tank capacity, and its FT200 gearbox when the F1 cars used DG300s, all combine to make it an exceedingly unlikely F1 design.