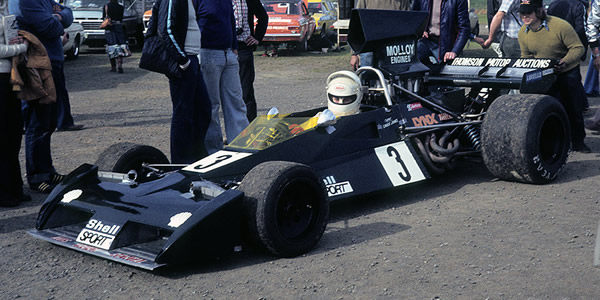 The Brabham BT43 was MRD's 1973 Formula 5000 design, and turned out to be the last ever Brabham customer car.  It was not a success in the UK, but did achieve some decent results later in Australia.

The BT43 was announced in October 1973, and was an attractive car, visually similar to Gordon Murray's Formula 1 BT42, with a triangular profile monocoque. The design was by Geoff Ferris, who combined elements of the F2 BT40 and F1 BT42 for the front suspension, which was Brabham-standard with top and bottom wishbones and outboard springs.  The BT43 used the F1 car's rear suspension geometry, with twin lower parallel links, top radius rod and top link. The aerodynamics followed those of the BT40, with a wedge-shaped profile. Water radiators were in the nose, and twin oil radiators at the rear mounted on the rear wing support. The track was relatively narrow, and the car was small by F5000 standards.

A month of so later, at the launch of the F1 BT44 in December, it was announced that Brabham had ceased to make production cars for other categories. The BT43 had been tested briefly at Silverstone by John Watson, but was not seen again. It was bought in June 1974 by Martin Birrane, who also traded in his Group 2 Mustang to buy Tony Brown's Lola T330, which Brown had been running for Damien Magee. Birrane joined forces with Crowne Racing, managed by Keith Greene and sponsored by Adlards, becoming team patron. The Brabham was only picked up on Monday night prior to the Monza F5000 race, but Birrane had a "satisfactory first outing". It was withdrawn at Mallory after the gearbox digested itself, and was well down the grid at Thruxton. Brett Lunger, who was driving for Eagle's F5000 team in the US, was brought in to drive it at Brands, and placed it seventh on the grid. After his battery failed in heat 1, he had a fabulous run in the second heat, passing champion-to-be Bob Evans for second place before damaging a wheel on the Armco barrier. Birrane then pulled Adlards Crown Racing out of F5000, after VDS withdrew funding for the Chevron B24 that the team had been running for Chris Craft. The BT43 made one more appearance that season, when Greene ran it for Craft at the season finale. Ironically Vern Schuppan led from start to finish in the ex-Craft Chevron B24, but Craft could only finish seventh in the BT43.

At the start of 1975, US F5000 entrant Chuck Jones came over to the UK to supervise a two-race deal for Lunger to drive the Adlards BT43. The first, the Race of Champions, ended on the warm-up lap, when Lunger was punted off by a back-marker, but he did a bit better at the International Trophy where Geoff Ferris, now working at Penske Racing, was on hand to give advice. Here Lunger ran well during the race but again retired. Jones then took the car back to the US where a deal was done for promising British F3 driver Dick Parsons to race it at Riverside. Unfortunately, Parsons crashed badly in testing at Riverside, and the car was not seen again for over two years.

In 1978, it was acquired by Kevin Bartlett, and taken to Australia for the Rothmans series. Although he did not feature during the Internationals, Bartlett took second place in a Gold Star race at Oran Park in July, the BT43's best ever finish, and third place at Winton in October. Colin Bond raced the car in the 1979 Rothmans series, and Bartlett then brought its career to an end when he crashed it at Sandown Park in September. The car was shipped back to Britain for repairs, where it was abandoned at Orsett Containerbase. After sitting for months racking up huge storage charges, it was acquired by Sandy, a dock worker, for the sum of £30. Sandy had no idea what it was, and as important parts had gone missing, there was no prospect of rebuilding it. The engine, uprights and wheels were sold off, and the remainder of the car parted out until only the tub remained. That was sold by weight for scrap. All that remained were two radiators, which sat in Sandy's loft for over 30 years until he shared the sad story of the end of the BT43 on TNF in 2013.

Please contact Allen Brown (allen@oldracingcars.com) if you can add anything the history of the BT43.