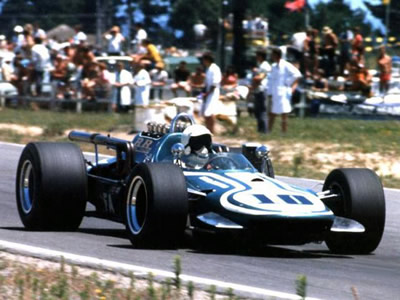 Marwood at Bay Park, New Zealand in December 1969 in what appears to be the 1965 car. Original picture by Jack Inwood; copyright Sancam. Used with permission obtained by Milan Fistonic.

J Frank Harrison was an early convert to the benefits of the little European "funny cars" and, with mechanic Jerry Eisert, had first shaken the USAC tree when Lloyd Ruby took pole at the April 1963 Trenton race in his 2.7-litre Lotus 18-Climax FPF. For the 1965 season, Harrison commissioned a brand new design from Eisert to be fitted with a stock-block Chevy V8.

Prior to the monocoque cars, Jerry Eisert built two open wheel spaceframe cars, the first of which did not appear on the USAC trail but did win a race at Riverside in 1964 driven by Rick Muther and won Pikes Peak in 1965, driven by Al Unser. The second spaceframe car was the first USAC car and is covered below.

The first Eisert to appear on the USAC trail was a space frame chassis based largely on Lotus thinking. It was raced as the #96 Harrison Special in the opening events of the 1965 season by Canadian Billy Foster. At Indy, the new monocoque car appeared and the 1964 car became the #93. It appeared just once more on 'the Trail', as Johnny Rutherford's mount at Milwaukee. This was later the #69 Arciero entry at the 1966 Indy 500. In recent years it has been fully restored and was listed on Chuck Haines' website and on Colin Comer's "Colin’s Classic Automobiles" website at one time. It appeared at the Goodwood Festival of Speed in July 2009 when owned by Haines but his website now lists it as sold. Colin Comer's website added that this car "returned to Indy with Otto Becker in 1968 as the #46 'Lotus Chevrolet Special'" and that it had more recently appeared "at 'the HAWK with Brian Redman' at Road America in 2012, the invitational "Stars of Indy" at the 2013 Barrington Concours, and various other events".

The 1965 car was Eisert's first monocoque, to be driven by young Al Unser at Indy. While driving the Eisert, Al Unser became the first man to try a wing on an Indy car and also one of the first to try a rear-engined car on a dirt track (at the Hoosier 100). A 65 Eisert may also have raced at Pikes Peak.

The 1965 car continued in use as a spare through 1966, being presumably the second car used at Fuji. The car was used by Don Wilcox at Pikes Peak in 1967, entered by Ted Trevor's Crown Mfg (Costa Mesa, CA), and was presumably the Crown entry that Wilcox was unable to qualify at IRP in July. It was then reported to be the car rebuilt by Eisert for Formula A, and sold to Stew McMillen. He raced the car through the 1968 FA season but it was thought unlikely that it was the car that then went with him to New Zealand. An Autoweek report early in 1969 says that McMillen retained his 1968 car as a spare, meaning the New Zealand car had to be a different machine. However, photographs of the Marwood car shows that it was the same 1965 "Fat One" so Autoweek must have been wrong about the spare car. The 1965 car remained in New Zealand until 1970 and was then shipped back to the US where it was sold, possibly via Pierre Phillips, to Bill Tempero (Ft Collins, CO) and fitted with wedge-style bodywork. He raced it in F5000 in 1971 and 1972 after which it was converted for street use by brothers Wayne and Steve Huntley in Nebraska. It was also used as a show car by Fred Bosselman in the late 1970s or early 1980s, probably at his Bosselman Truck Plaza in Grand Island, Nebraska. In the early 1990s it was acquired by Bill Wiswedel (Holland, MI) who has restored it to 1965 colours but still with the later, squarer bodywork. Still with Wiswedel in November 2020. 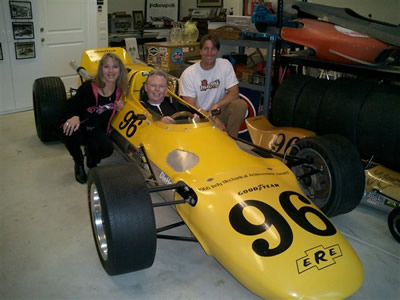 Greg Weld was reacquainted with the restored 1966 Eisert when he visited the Eisert family a few weeks after Jerry Eisert's death in March 2006. Pictured with his are Jerry's daughter Lorrie and son Mike. Copyright Sherry Schaeffer 2006. Used with permission.

The 1966 car was originally designed for the Ford 255 but delivery problems means that it started with a Traco-Chevy like its predecessors. It changed to Ford 255 at Indy and made the field qualifying 33rd, only to crash at the start. The Ford stayed in for a few races but was later changed back to Chevy.

The #96 car driven by Greg Weld at Phoenix and Trenton in 1967 prior to Indy qualifying is presumably the 1966 car as Al Murray was told that his (1967) car was finished in time for Indy. It is not known what happened to the 1966 car after its time as a backup car in 1967 but by 1992 it was sitting in Jerry Eisert's garage in Fallbrook, CA. It remained with Eisert and then with his family after his death. Sold by the family to Toney Edwards some time around 2011 and restored for him by Peter Jamie. Tested at the Indianapolis Motor Speedway in May 2014. 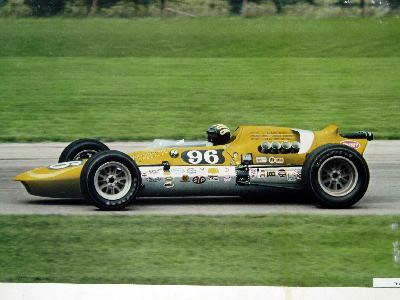 Weld took his rookie reaquaintence test on 3 May in the #93 car but struggled for speed in the opening days in the #96 car. On Saturday 13 May, the first day of qualifying, Weld brushed the wall and broke a wheel on his warm-up lap and didn't attempt a qualifying run. With 25 car qualifying that first weekend with a slowest time of 161.261 mph, Weld didn't break the 160 mph mark until 18 May, the last Thursday of practice before the final qualifying weekend. On the Friday, Weld lost the #96 car at turn 1 and was lucky not to hit the wall. Gary Congton also tried out the #96 car that Friday, despite being nominated for the #? car; in which he was later bumped by Jochen Rindt. On Sunday 21 May, the last day of quaifying, Weld spun the #96 car a third time, brushing the wall again and damaging the car. Although 63 qualifying attempts were made, nobody attempted in an Eisert. Ronnie Duman is recorded somewhere as having driven the #93 car at the 1967 Indy 500.

Gary Congton then took over the #96 car for the rest of the year, driving at Milwaukee and Langhorne in June, Mosport, IRP and Langhorne in July and St Jovite in August. At most of these races, the Eisert was run with a Ford engine, Mosport being the only race with a Chev after an engine failure in practice two weeks earlier at Langhorne. At IRP, Ronnie Duman ran alongside Congton in the #93 [1966?] car with a Chev engine but DNQ.

After Congton's death, in a dirt track race at Vigo County, Indiana, on 24 Sep, the team pulled out of USAC. The returned at Riverside on 26 Nov for the Rex Mays Tribute, where Lothar Motschenbacher raced the #96 car, now with a Chev again.

In 1968, Harrison and Eisert went their separate ways. Eisert Racing Enterprises took the #96 Chev car, presumably the 1967 car, to the three pre-Indy races for Johnny Rutherford but crashed at the California 200, retired at Las Vegas and then crashed again at at the Phoenix 150, with the Eisert catching fire. Despite an entry, the #96 did not appear during Indy month and was next seen at Castle Rock on 7 July where Rutherford again drove the #96 ERE car alongside Jack Eiteljorg's #7 car, presumably his 1968 Formula A car.

The next, and last, works participation in USAC in 1968 was at the Riverside Rex Mays '300' event on 1 Dec where Peter Revson drove the #96 Chev car and Ludwig Heimrath drove the #93 car but was too slow to start. It is interesting that the entry list for that race shows four Eisert-Chevs: the gold #93 car for Heimrath, the yellow #96 car for Revson, McMillen's red and white Formula A car at #121 and one Otto Becker, of Montebello, CA, in a red #107 car. Note that Otto Becker also entered a #46 "Lotus Chevrolet Special" at Indy in 1968.

At Riverside 1968, the #93 car was sold to Heimrath and he raced it in USAC in 1969, 1970 and 1971. In that latter season, after his last USAC appearance in July, he appeared alongside the F5000 cars at Seattle before the car was retired. It is believed to have ended up in a wax museum in Toronto until the early eighties and then stored in a barn till the early 90's. A racer found the car and hoped to restore it, performing a lot of research before selling it to someone in Seattle. Al Murray (Seattle, WA) purchased it in 2002 and, in 2005, was in the middle of restoration with the intention of bringing the car back out to the track in 2006. Still with Murray in October 2014.

This page is dedicated to the memory of Jerome Arthur 'Jerry' Eisert, born 5 May 1931 in Crookston, Minn, who died 23 Feb 2006 at San Marcos, CA. My thanks to his daughter Sherry Schaeffer, his former partner at ERE Paul Ebeling, AL Murray, Milan Fistonic, Shayne Windelburn, Bill Freeman, David Pozzi and to F5000 author and historian Wolfgang Klopfer.