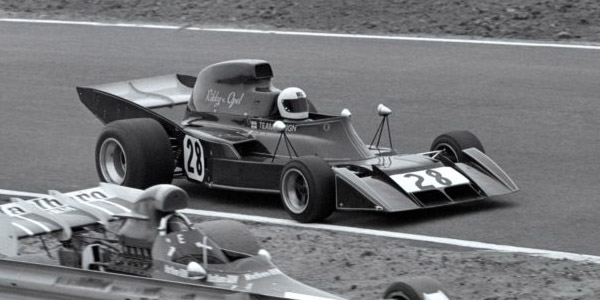 Work started on the Formula One Ensign in December 1972, with the design work being done by Mo Nunn, but with some guidance from Lotus designer Dave Baldwin. The monocoque was constructed by Nunn in the Team Ensign workshop in Walsall, and was a low, flat and wide monocoque, with the engine acting as a stressed member. Front suspension was orthodox, with top and bottom wishbones and outboard spring/damper units. At the rear, it used twin lower and single upper links, with radius arms. The main radiator was in the low, wide nose, with oil radiators mounted on top of the sidepods in front of the rear wheels. The most striking feature was the all-enveloping rear bodywork. Rikky von Opel was a member of the Opel car-making family, and had been able to finance his own racing career, moving quickly from Formula Ford in 1970, into Formula 3 with a Lotus 69 in 1971 and then an Ensign LNF3/72 in 1972, when he won six races. He bought four new Cosworth DFV engines for the F1 project, as well as financing the whole project.

After testing during June 1973, the new car made its debut at the French GP, which the team used as an extended training session, qualifying at the back of the grid and running at the back to finish 15th. Van Opel was not really able to give Nunn much feedback about the car, so it was tested by Peter Gethin the following week, resulting in changes to the rear suspension and the rear wing. Dave Baldwin announced his departure from Lotus to join Nunn’s team before the British GP, but he continued to work from Norfolk at first. The rest of the season was a learning experience for Von Opel and for the team, but with Von Opel having litle idea how to improve the car, progess was slow. He qualified 21st of the 29 cars at the British GP, and again the car was reliable enough to finish, albeit last, two laps adrift of the field. Encouraged by this performance, he improved to 14th in practice at Zandvoort but a broken suspension mount left him a non-starter. He could only manage 19th in practice at the Austrian GP, where the Ensign retired with fuel pressure problems, and at the Italian GP, Von Opel placed 17th on the grid, ahead of all the Shadows and Williams, and in among the BRMs, but retired early with overheating. Despite spinning in practice at Mosport and starting last on the grid, he made good progress during the race, but three pits stops dropped him to last on the road. The team then had a dreadful weekend at Watkins Glen, von Opel admitting he had no idea how to make the car go any quicker. He started last on the grid and retired on the opening lap.

A new Ensign N174 was produced for the start of the 1973 season and the original N173 was not seen again until the International Trophy in April, where it was on hand as a spare car. Von Opel then left the project and Vern Schuppan took over the drive, with support from Teddy Yip. The original car was brought out again after Schuppan's deal came to an end and was driven by Mike Wilds in Austria, Italy and Canada, but he failed to qualify each time. He finally got on the grid at Watkins Glen, but was not classified as a finisher. MN01 then remained at the Ensign factory until 1982, when the whole stock of old cars was acquired by dealer Bobby Howlings. It was in the company of an unused monocoque that was believed to be all that remained of MN03, and a few owners later these came into the same ownership as MN02. At this point, a project began to rebuild MN01 on the 'MN03' monocoque and this continued through several more owners until the resulting car was first raced by Sid Hoole in Masters events in 2012. Hoole crashed this car heavily at Silverstone in 2014, after which MN01 was rebuilt on its original monocoque, reappearing at Silverstone in 2018 with Sid again in the seat.