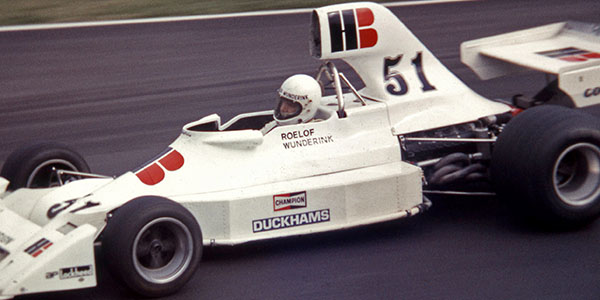 Roelof Wunderink in the Ensign N174 at the 1975 Brands Hatch Race of Champions. Copyright David Bishop 2018. Used with permission.

The Ensign N174 was a tidied-up version of the N173, for Rikky von Opel and Team Ensign to continue the F1 learning process.

After his confidence-battering experience at the end of 1973, Rikky Von Opel really needed to spend the off season practicing his craft, but arrived at the Argentine GP in January 1974 having not sat in a racing car for three months. Mo Nunn had used the time constructing an updated version of the Ensign N173, focusing on ease of maintenance but also with revised rear suspension, airbox, and water and oil systems. The new car needed sorting but Von Opel did not have those skills, and, spooked by the erratic handling, wisely decided not to start the race. The team skipped the Brazilian GP to focus on further revisions to the car, changing the rear wing to a centre-post design and modifying the front wing design after tests in MIRA’s wind tunnel. Even so, Von Opel found the car dangerously unstable and again elected not to start the Race of Champions. When he decided not to race in the International Trophy either, Brian Redman was brought in and had a good run, finishing eighth. Von Opel soon confirmed his departure from the team.

Vern Schuppan and his sponsor Teddy Yip quickly did a deal to take over the Ensign drive, the car being resprayed from Von Opel’s dark green to a vibrant orange. The Australian qualified 14th out of 31 for the Belgian GP and then succeeded in qualifying for the Monaco GP, no mean feat for the tiny team, but he did not progress further and ended his time in the car with two non-qualifications. He was replaced by Mike Wilds at the Austrian GP, but he drove the older N173/MN01 in his four events.

Mo Nunn found a new sponsor for 1975, the Dutch firm HB Bewaking, and they nominated Roelof Wunderink for the drive, later replacing him with the more experienced Gijs van Lennep in time for the Dutch Grand Prix. Ensign produced another new car, the Ensign N175, at the French Grand Prix but when Ensign and HB Bewaking parted company at the end of 1975, HB kept the N175 and Ensign had to start the 1976 season with the old N174. Chris Amon joined Ensign and he demonstrated the old car still had potential. Once the 1976 Ensign N176 was complete, the N174 was sold off and was raced by Guy Edwards in the Shellsport G8 series. Here the level of competition was entirely different, and Edwards put the car on pole for its first race. It was also used in libre racing by John Lepp, who established an outright Brands Hatch club circuit lap record in the car that lasted into the 1980s. The Ensign later went to Robin Smith for the 1979 Aurora series until Smith’s teammate Richard Jones damaged it at Snetterton. It was sold in damaged state to George "Welly" Potter who used the running gear in a Lotus Esprit he was building for the 1981 Donington GT series. Thereafter MN02 existed as an incomplete set of parts.

A second N174 chassis, nominally MN03, was built but never completed as a car. This unused monocoque was used to rebuild N173/MN01 for historic racing but was damaged in 2014. The remains of 'MN03' were in the same ownership as MN02 in 2022.