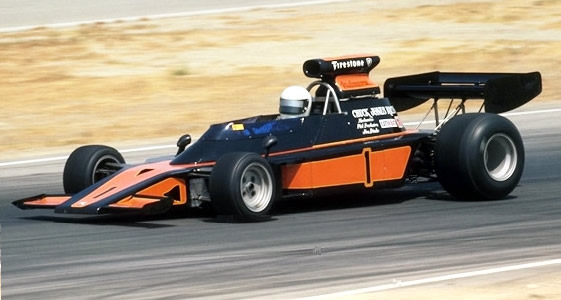 McRae and the eponymous GM2. Image issued by Corel.

The McRae marque was a short but highly successful affair. Graham McRae had built successful small cars in his native New Zealand and had also seen success modifying his McLaren M10B in 1971. For 1972, he teamed up with Leda Cars and designer Len Terry to create his own car, named at first the Leda LT27. In a mid-season coup, McRae took over the operation, the cars becoming McRae GM1s. The GM1 was the best car of its era, winning the Tasman and US championships in 1972 and the Tasman championship again in 1973. It was followed by the GM2 design which McRae soon sold to Jack McCormack who built them as Talons. A one-off GM3 followed belatedly in 1976 and slowly evolved into the GM9 Can-Am car.